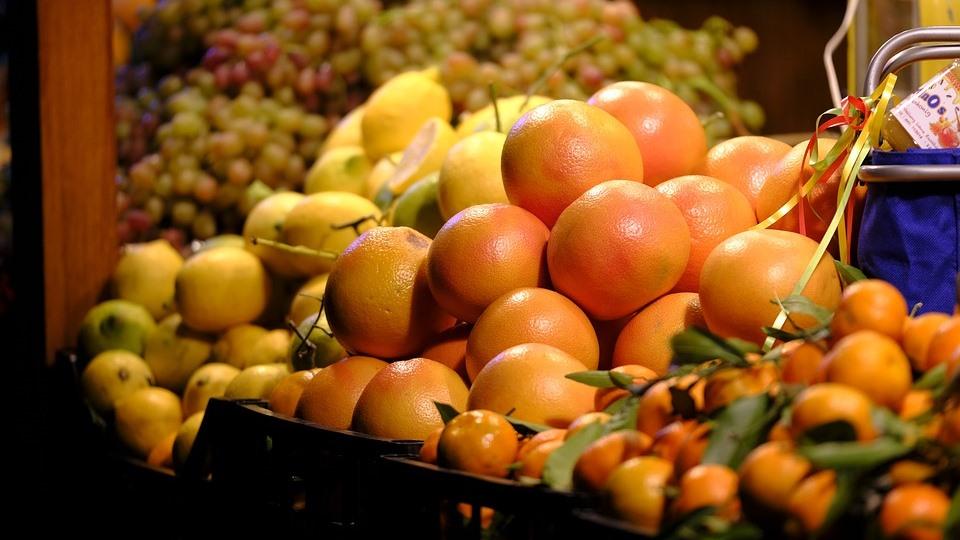 According to the “Australian Agricultural Trade 2020/21” report published recently by Rural Bank, “Fruit exports to China fell in 2020/21 for the first time since 2009/10, declining by AU$182.6 million (−35%) as trade tensions between Australia and China continued to build.” The steepest declines were in table grapes and citrus, exports to China of which in the 2020/21 production season tumbled by 40% and 37.9%, respectively.

Australia’s total global fruit export value of AU$1.3 billion for 2020/21 was down AU$267.5 million, or 17.4%, compared with the previous season. Australia’s fruit export volumes declined by 18% over the same period, showing that overall average fruit export prices held steady and the change in value was mostly attributable to decreased volumes. 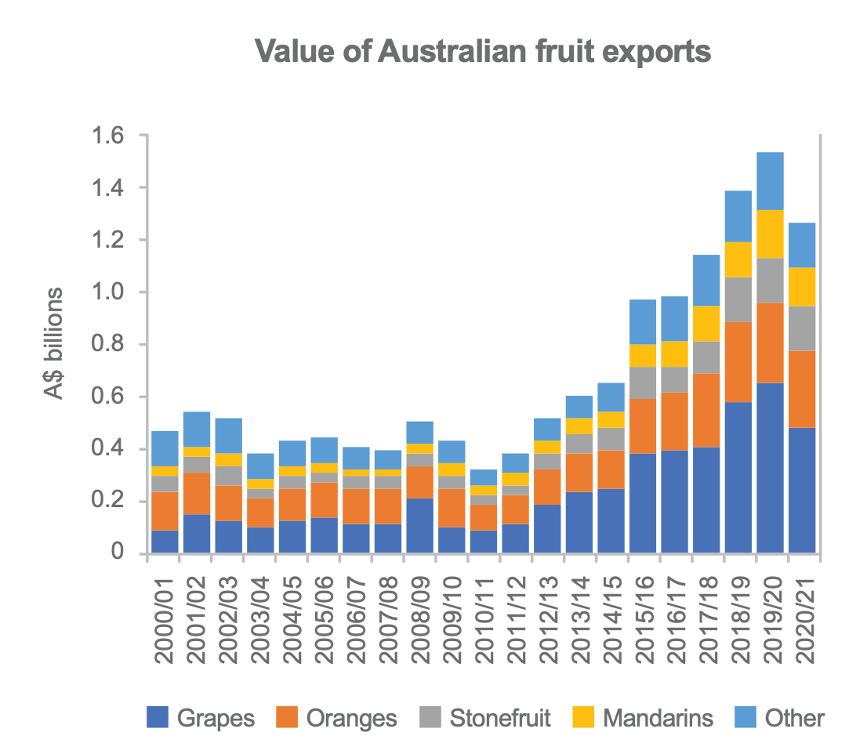 In the 2015/16 season, China supplanted Japan to become Australia’s most important export market for fruit and has maintained that status since, even after the sharp fall in 2020/21. Australia exported AU$339 million worth of fruit to China in 2020/21, corresponding to 26.7% of its total fruit export value. 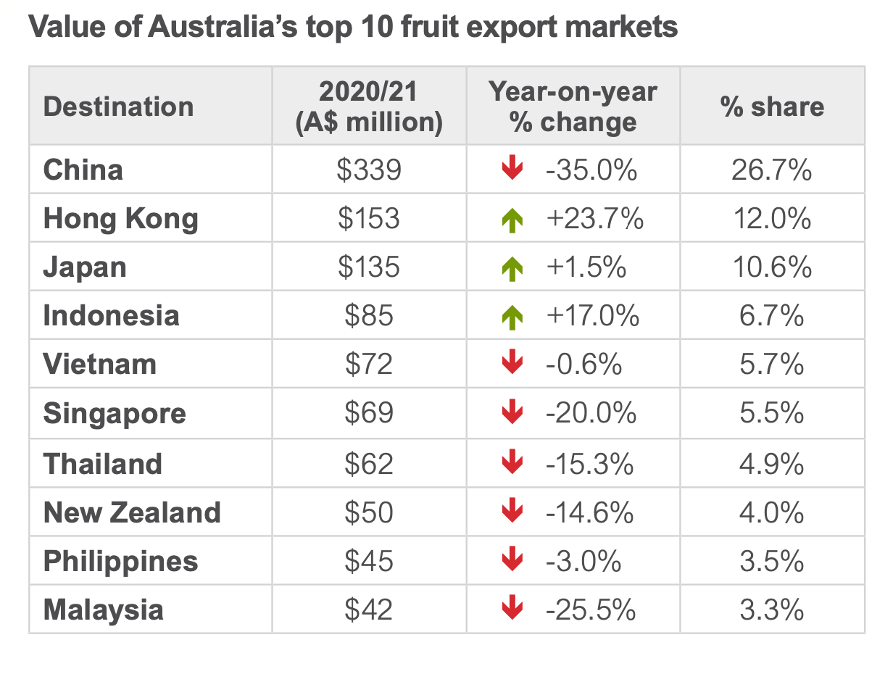 According to the report, the drop in exports may not be entirely attributable to Sino-Australian trade tensions: “Chinese fruit importers noted that the import fruit market has grown more diverse and the competitive advantage of Australian fruit is not as strong as it previously had been.”

In the following, we summarize the report’s findings regarding three product categories: table grapes, citrus and stone fruit.

Table grapes account for approximately half of Australia’s total fruit exports by value. They were also the fruit that saw the biggest drop in value in 2020/21. Australia exported AU$485 million of table grapes during 2020/21, a season-on-season decrease of AU$168.4 million or 25.8%. Meanwhile, the export volume fell by 18%, meaning a decline in average price of 6.4%.

Trade tensions and coronavirus-related customs delays in China both took a major toll on Australian grape exports. As noted in the Rural Bank report, “Exports declined in response to reported delays of up to 20 days at Chinese customs which impacted the quality and value of fruit.” China is the last major nation in the world still following a “zero-COVID” strategy. Customs delays and problems caused by the detection of COVID-19 genetic material on fruit shipments have created headaches and financial losses for exporters of fresh fruit to China from many nations around the world — with the most recent examples being Zespri kiwifruit from New Zealand and Thai durians.

Table grapes accounted for 48.4% of Australia’s fruit exports to China by value this season, but nevertheless dropped by AU$112.6 million amid ample supply. China did, however, remain Australia’s largest export market for table grapes.

Oranges are Australia’s second-largest fruit export. The total value of Australia’s orange exports in 2020/21 was AU$287.2 million, a decrease of AU$23 million or 7.4% compared with the previous season. Prices, however, were up 7.4% on average to AU$1,654 per metric ton owing to the smaller crop and reduced supply.

Exports of citrus from Australia to China in 2020/21 fell by 37.9%, a reduction of AU$63.8 million. Although increased exports to Hong Kong, Japan, Vietnam and Indonesia partially offset the reduced exports to China, Australian citrus growers still face tremendous pressure.

Stone fruit was the only category of Australian fruit that saw an increase in exports in the 2020/21 season. Driven by cherries, peaches and plums, total stone fruit exports increased slightly by 2.1% to AU$174.4 million.

Among them, plum exports increased by more than 47%, making them the primary force driving the increase in stone fruit exports. The export volumes of peaches and cherries remained essentially unchanged, while the average export price rose by 10.7%. 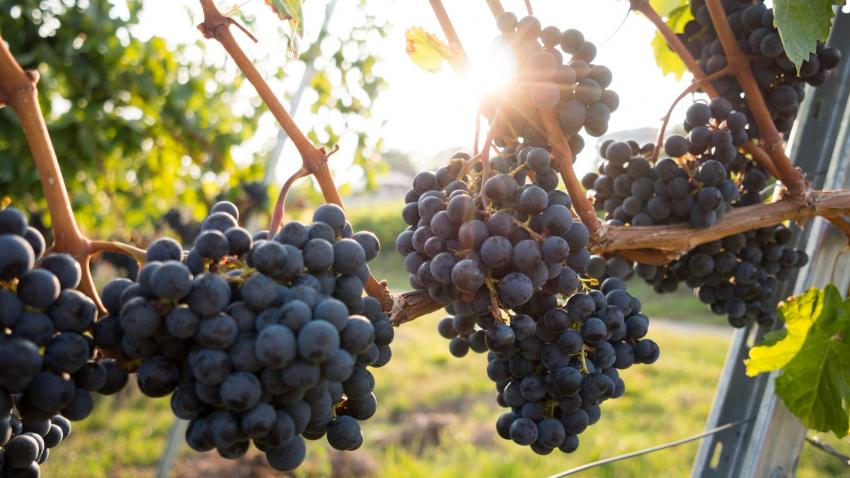