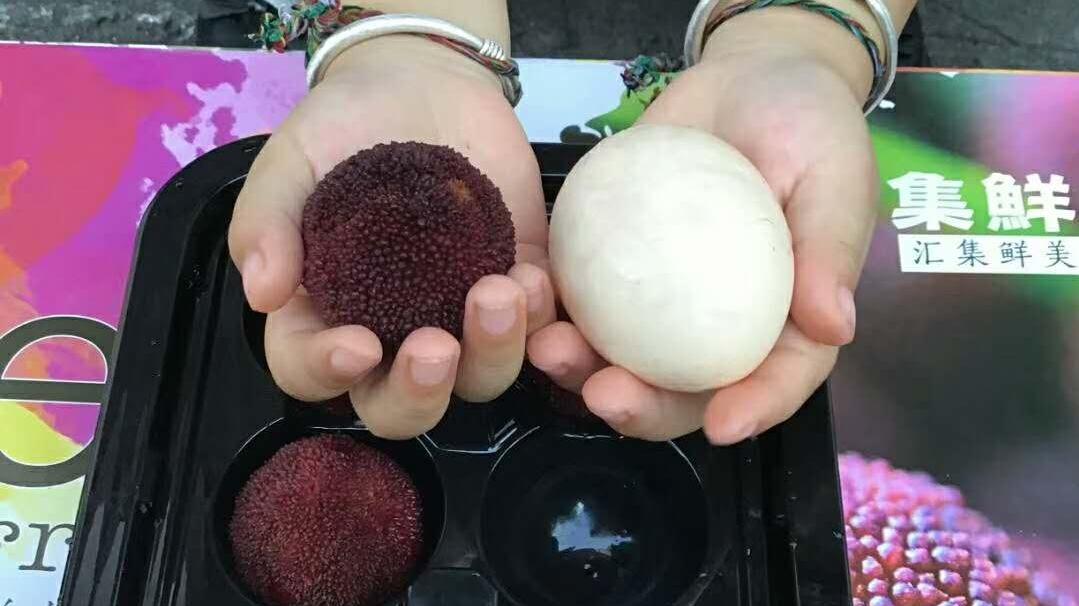 Since hitting the market in early June of this year, waxberries from China’s Zhejiang province have done a remarkable job in China, with the Dongkui variety from Xianju County proving especially popular. Dongkui waxberries are a late-season variety featuring a large size, a round shape, juicy flesh, an intense sweet flavor and low sourness. By July, the sales of Dongkui waxberries had already drawn to a close. Looking back at this short supply season, it is remarkable that even despite the impact of the ongoing COVID-19 pandemic, Dongkui waxberries still successfully reached the Australian market under the Jixianhao (集鲜号) brand of Taizhou Jiasheng Agriculture (台州嘉盛生态农业有限公司).

The exported Jixianhao waxberries originated from Jiasheng’s production bases in Xianju County and the city of Linhai. Company representative Guan Binghua told Produce Report that waxberry production and marketing this year had not been severely affected by the COVID-19 crisis. The waxberry quality this season has also been outstanding owing to ideal climate conditions, thus making this year’s farm gate prices higher than those of previous years.

The waxberry industry is highly valued at various levels of the Zhejiang provincial government, with local authorities implementing a series of pest control and disease prevention measures to ensure quality and food safety. As a result of these efforts, Dongkui waxberries have earned a good reputation throughout China.

According to Guan, the sales volume of Jixianhao Dongkui waxberries reached 30 tons this year, with the majority being distributed to e-commerce platforms such as JD.com and Tmall. During his conversation with Produce Report, Guan also highlighted the crucial nature of preservation technologies and cold-chain logistics for waxberry sales. In the past, limitations in these two areas meant that Zhejiang waxberries were a seasonal delicacy essentially restricted to consumers in the Yangtze River Delta, which incorporates Shanghai municipality and Jiangsu and Zhejiang provinces. With the recent improvements, Zhejiang waxberries can now reach not only almost all parts of China but also supermarket shelves in other countries.

The main overseas markets for China’s waxberry exports are Australia, Canada, the United Arab Emirates and several European countries. Jiasheng established its waxberry export business last year and reached a total export volume of 10 tons that first year. However, this year the company has had to realign its business model to focus more on the domestic market owing to the COVID-19 outbreak. Nonetheless, the company considers waxberry exports an integral part of its long-term strategy and intends to expand these exports in the years to come once the pandemic has subsided.

Owing to their very short shelf life, selling waxberries abroad is even more challenging than domestic sales. According to Guan, three packaging methods are commonly applied to guarantee the freshness of waxberries during transit, namely, modified atmosphere packaging, vacuum packaging and freezing. For this season’s exports, Jiasheng adopted the latter two methods before delivering the products to Sydney, according to the buyer’s requirements.

Taizhou Jiasheng Agriculture is an agricultural company whose business scope includes the planting, sorting, packing and selling of fruits such as waxberries and citrus products. In recent years, in the hope of forging a modern supply chain, Jiasheng has introduced an innovative business model based on exploiting the advantages of the internet and building close ties with farmers, agricultural cooperatives and production hubs.