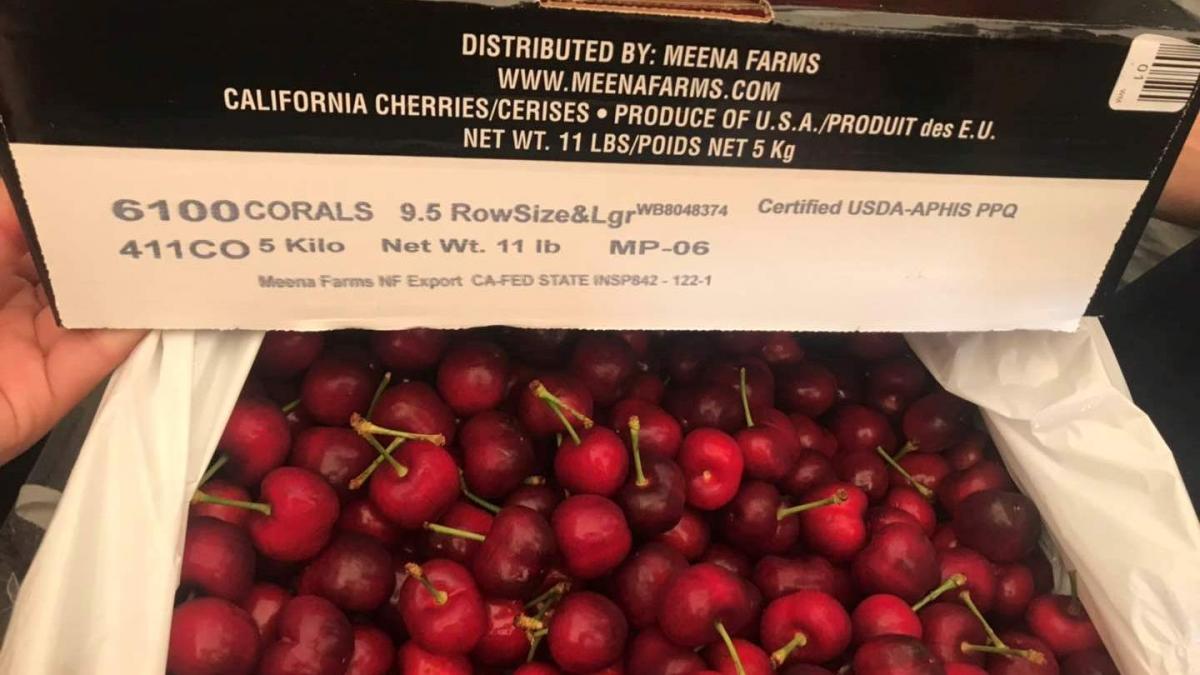 On May 3, this season’s first air shipment of Californian cherries to China arrived in Shanghai and Guangzhou. For a first-hand account of the arrival of this delivery, Produce Report interviewed Frutacloud (好果云), one of the importers behind the shipment.

Patty Li, head of operations at Frutacloud, told Produce Report that her company’s two batches of Californian cherries under the Meena Farms brand reached Guangzhou’s Jiangnan Fruit and Vegetable Wholesale Market on the night of May 3. The cherries were of the Coral variety with a size of 9.5 row. According to Li, owing to fierce competition from China’s domestic cherries, upon arrival the Californian cherries were not in as high demand as those from the Southern Hemisphere, which have a counter-seasonal advantage on the Chinese market.

The history of cherry cultivation by Meena Farms dates back 20 years. Now, as one of the most recognized brands of Californian cherries, Meena Farms produces over 15 cherry varieties, including Coral Champagne, Tulare, Royal Hazel, Brooks, Bing and Garnet.

California’s cherry production is expected to be above average this year with an estimated total harvest of 6.5–7.0 million 18-pound cartons, which corresponds to a 10–15% increase over last year.

The California Cherry Board also recently announced that the harvest for some early-season cherry varieties, such as Tioga, Burlat, Royal Hazel and Coral Champagne, would begin slightly earlier than usual on April 23–27, while other early varieties such as Brooks, Royal Lynn, Sequoia, Arvin Glen and Early Glen were expected to be ready for picking during late April and the first week of May. The cherry season typically goes into full swing from the second week of May, whereupon it lasts for approximately six weeks until late June.

In 2017, the U.S. cherry sector saw record exports to China with $170 million worth of Californian cherries being dispatched to the Chinese market. The situation in 2019 was a completely different story, however, as U.S. fruit exports to China were severely impacted by the retaliatory tariffs imposed by China. Consequently, the value of Californian cherry exports to China plunged to only $88 million in 2019. On March 2, 2020, China announced a new round of tariff exclusions for U.S. agricultural products, which included cherries. According to industry sources, this policy may present an opportunity for U.S. cherries to bounce back in China.

However, the ongoing COVID-19 epidemic has somewhat mitigated the improvement in this situation. Californian cherries, owing to their relatively small export volume and brief harvest period, are highly dependent on air transport for export to China. The worldwide lockdown due to the epidemic has severely limited air transport resources, with flights between the U.S. and China becoming increasingly scarce. As such, successfully shipping the cherries to China may be as challenging a task as making a profit.