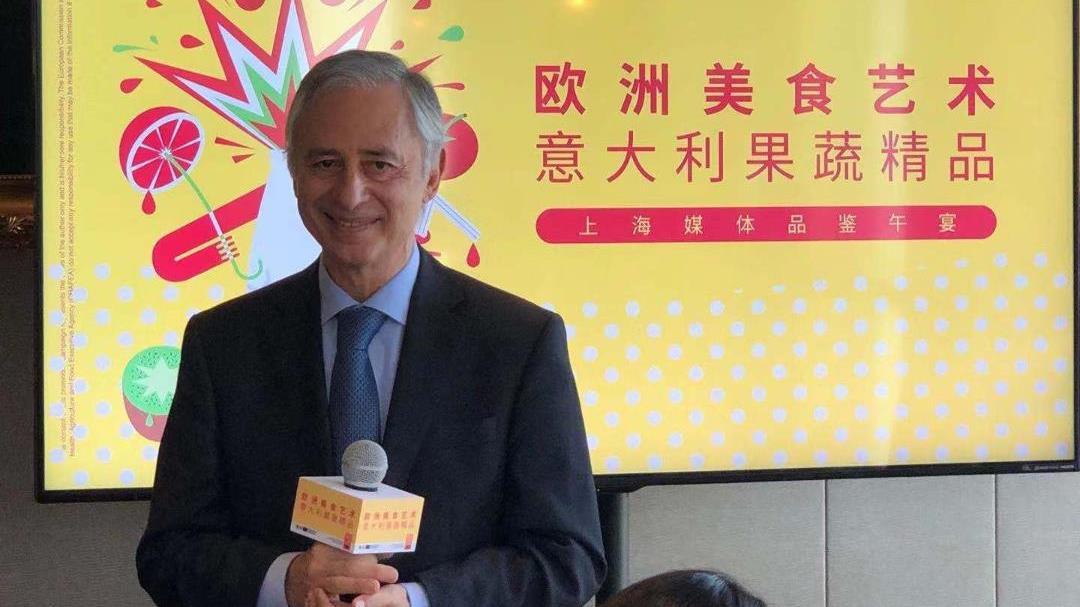 Salvo Laudani speaking at the CSO event in Shanghai

Eight months after the first consignment of Sicilian blood oranges reaching China in March 2019, Produce Report met with Salvo Laudani and Sara Grasso, Oranfrizer’s marketing manager and export manager, respectively, at the November CSO media lunch in Shanghai to learn how the company is planning to follow up on its Chinese market debut.

Considering the limited size of the shipment, namely, three containers carrying approximately 60 tons of Moro and Tarocco blood oranges, Oranfrizer was not planning to immediately take the Chinese market by storm. Last year, according to the company’s marketing manager, a total of half a million tons of oranges were exported to China. However, he does not see blood oranges as falling into the same category as these. “We do not cultivate a commodity,” explained Laudani, “we cultivate a specialty. It’s a Tarocco, it’s a special orange, so we need to explain the benefits, the characteristics and the added value of our product and to position it in the right way on the market.”

It is difficult to imagine that blood oranges could be anything but a premium product, considering the naturally circumscribed area that they must be cultivated in. Only growing in the shadow of the snow-capped volcano Mount Etna on the east coast of the island of Sicily, Tarocco oranges require, in addition to rich volcanic soil, a particular microclimate created by the volcano itself. Grasso talked us through the coloration process of blood oranges, “all the blood orange plantations are on the plain at the foot of the volcano. The microclimate there stimulates the anthocyanins [a pigment found in many flowers, but rare in citrus fruits]. During the winter in Sicily it is still hot during the day, but at night near the volcano the temperature drops and it becomes very cold. It is this particular variation in temperature that acts on the anthocyanins, releasing the red coloration.”

Owing to this natural process, blood oranges are also considered to possess particular health benefits because, in addition to giving the oranges their characteristic red flesh, anthocyanins are natural antioxidants. These potential health benefits combined with a very distinctive and balanced taste have made Tarocco the orange of choice in Italy. “The normal orange season starts in November,” said Grasso, “but when in December the red oranges become available, sales of navel oranges drop because people want to buy red oranges. Italians recognize their added value and original taste.”

According to Laudani, “exporting this appreciation of Italian Tarocco oranges and their rare properties to China, will need to accompany the export of the oranges themselves.” At 29.9 Chinese yuan for a pack of four oranges, the price at which blood oranges were retailing at the supermarket chain Hema in March 2019, this fruit does not come cheap, although it is well within the reach of health-conscious middle-class consumers. “We need to try to obtain the right price as we did this year,” maintains Laudani, “around one euro per orange was a reasonable price. Of course it’s a very different price to oranges from other countries, but those countries provide navel and Valencia, which are common oranges. They don’t give you a Tarocco.”

The further markup for export to China originates from the quality of the fruit itself, according to Oranfrizer’s marketing manager. “We use almost no pesticides, so our oranges are basically natural, and in natural conditions fruit is perishable. The duration of the shipment is around 35–40 days and, in addition, the cold treatment required by the Chinese phytosanitary authority lasts for 15 days. This treatment stresses the oranges, which are more vulnerable because they are grown naturally and not exposed to pesticides. So to guarantee the quality of the oranges that arrive in China, we have to select the very best that we have in the field. This is why the red oranges, which are already expensive in Italy, will necessarily be more expensive in China.”

This year Oranfrizer has registered a larger number of hectares with the Chinese authorities than last year’s three; however, these are still tentative steps for Oranfrizer. As Laudani pointed out, “we don’t expect to export high volumes immediately, also because this is a new product for China and we too have to learn about the Chinese market.”

Salvo Laudani speaking at the CSO event in Shanghai