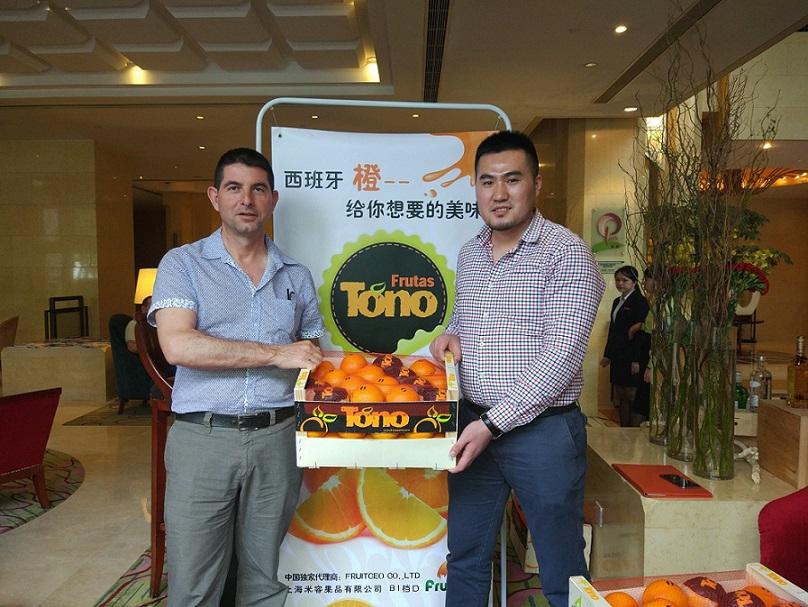 “For both Tono and us quality is paramount and quantity is secondary,” says Mr Dawud Bai, General Manager of Fruitceo, a fruit import and distribution company based in Shanghai that is the exclusive agent in China for oranges from Frutas Tono of Spain. “We believe the quality of Tono oranges will win the favor of Chinese consumers and secure them a place in the China market.”

It may be too early to predict whether the family-owned citrus producer, headquartered in Valldigna, Valencia nearby the Mediterranean coast, will ultimately be a major supplier of oranges to China.

[[{“fid”:”414”,”view_mode”:”default”,”type”:”media”,”link_text”:null,”attributes”:{“height”:”200”,”width”:”150”,”style”:”float:right”,”class”:”file-default media-element”}}]]With a 40-year history growing citrus and good reputation for quality in European markets, Tono only started exporting oranges to China in 2015. For Tono’s 2015/16  growing season, which runs from September to May, exports to China reached 1,000 tons. This amount represents a small fraction of the company’s total production of 120,000 tons and an even smaller fraction of China’s market for imported oranges, which the USDA projects will be 200,000 tons for marketing year 2015/16. South Africa is the top foreign supplier of oranges to China.

Nevertheless, Tono finds itself confronted with the classic “good problem to have” in business, with demand in China outpacing the volume of oranges the company can supply. Fruitceo initially started marketing the oranges in the Yangtze River Delta cities such as Shanghai, Hangzhou, Nanjing and Wuxi—with a small quantity also going to Beijing. The next step will be to expand distribution to Guangzhou in southern China.

Tono and Fruitceo believe quality will make the fruit stand out on the Chinese market, where consumers of imported fruit are known to be demanding about appearance and flavor. Tono export manager Juan Bautista Juan says that an ideal Mediterrean growing climate along with strict growing and harvesting procedures yields a fruit that is large, juicy high in nutrients and with a minimum of residual agricultural chemicals. Furthermore, Tono selects oranges for export to China from among the highest quality 3% of its total production.[[{“fid”:”415”,”view_mode”:”default”,”type”:”media”,”link_text”:null,”attributes”:{“height”:”960”,”width”:”1280”,”class”:”file-default media-element”}}]]

Tono starts shipping oranges for the China market in January. Sea shipping to China takes one month. This means the oranges arrive on the tail end of the season for oranges produced domestically in Jiangxi Province and just in time for Lunar New Year celebrations, when demand is strong for high-end fruit to give as New Year’s gifts.

With good seasonal timing, high quality and a supportive local partner, Tono brand oranges are a fruit worth keeping an eye on in the China market.