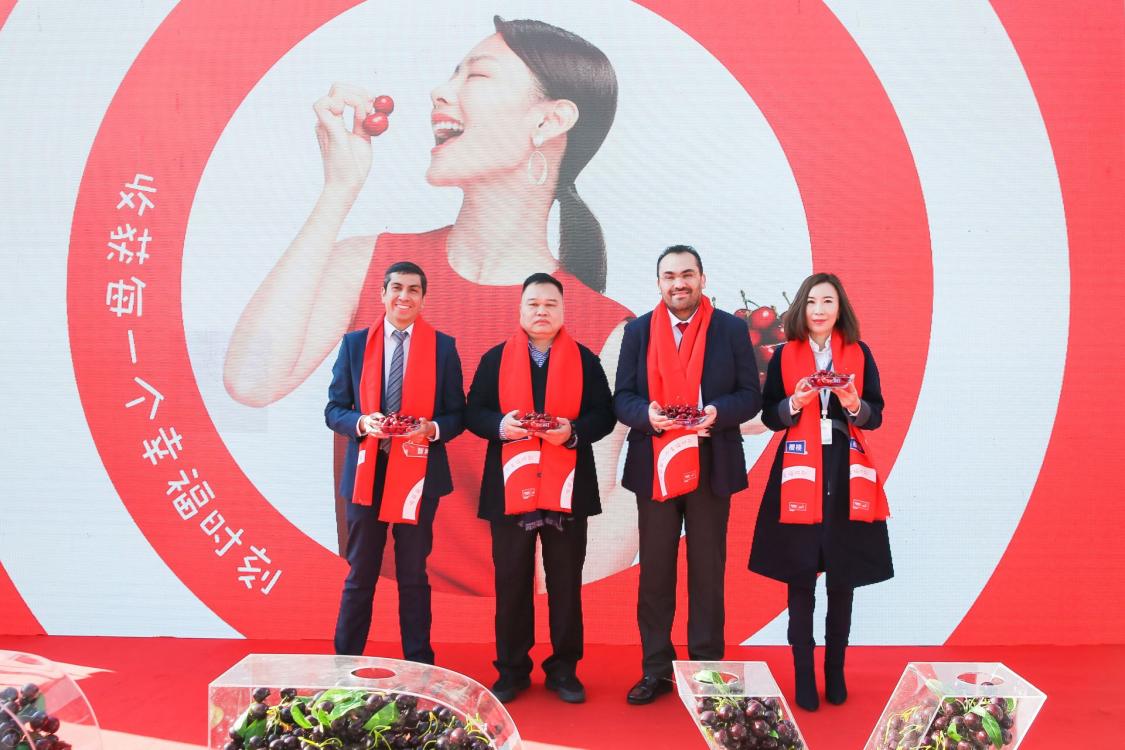 On Dec. 7 at Guangzhou’s Jiangnonghui Market, a key distribution point for imported fresh fruit in China, arrived the moment fruit fans across China await every year: representatives of Chile’s government, the Chilean fruit trade industry association, and fresh cherry exporters and growers, joined fruit importers and distributors from China to celebrate what could be a record-breaking 2019/20 Chilean cherry season in China.

The celebration, organized by the Chilean Cherry Committee of the Chilean Fruit Exporters Association (ASOEX), featured remarks by Hernán Jaramillo, consul-trade commissioner for the Trade Commission of the Consulate General of Chile in Guangzhou; Charif Christian Carvajal, ASOEX’s marketing director for Europe and Asia; and Zheng Nanshen, general manager and executive director of Guangzhou’s Jiangnonghui Market. In addition to the opening ceremony, attendees had the chance to immerse themselves in Chilean culture through watching a traditional Chilean cueca dance as well as posing for cherry-themed photos.

Jiangnonghui, formerly known as the Guangzhou Jiangnan Fruit Wholesale Market, is the first stop in mainland China for much of the fruit carried by sea shipment from Chile. It serves as an important distribution point for imported fruit to retailers across China. The launch celebration coincided with the arrival at Jiangnonghui of this season’s first sea shipment of Chilean cherries.

The hundreds of containers full of lush, red, delicious fresh cherries will be distributed across the country to consumers eager to enjoy their red moments and partake in the new tradition of eating Chilean cherries. Although air-freighted Chilean cherries have been available in China since mid-October, the arrival of sea-freighted cherries marks the beginning of a period of increased supply to consumers of cherries that will run through the Spring Festival holiday. Chilean cherries can then still be enjoyed across China until the end of February and beyond.

“Cherries from Chile have finally arrived!” said Carvajal. “Again this season, we are promoting our cherries under the theme of ‘Enjoy your Red Moment.’ And the good news is that, this season, more people than ever will be free to enjoy Chilean cherries because we are estimating a record export volume of Chilean cherries to the whole world of up to 210,000 tons, rising from roughly 180,000 tons last season. And apart from volume, additionally this season, the fruit is again looking great in terms of condition upon arrival to China!”

“Exports of cherries from Chile and other fresh fruit to China are an important component in our two countries’ flourishing economic relationship,” said Jaramillo. “We are delighted that eating cherries for the winter has gained the status of a new tradition for consumers across the country.”

Although a small country by size, Chile’s topography and long, thin shape mean that it possesses a wide range of climate zones perfectly suited to growing a variety of fruits — especially cherries. Chilean exporters and growers use techniques such as immediate pre-cooling after harvest, combined with state-of-the-art automated sorting and packing under hygienic conditions — along with stringent temperature and controlled atmosphere transport procedures, among others — to ensure that the cherries arrive in perfect condition for Chinese consumers to enjoy with their families, friends and colleagues.

Thousands of containers of Chilean cherries will arrive in China this season, with volumes peaking in January and February, throughout Spring Festival and beyond. Much of this volume will arrive in vessels that come directly from the Port of Valparaiso in Chile and reach Hong Kong in just over 20 days.

“Trade between Chile and China has expanded greatly since the free trade agreement between the two countries came into effect in 2006,” said Zheng. “This has allowed even more Chinese consumers to enjoy an ever-wider variety of Chilean fruits. Among these, the fruit that has captured the greatest fondness and largest following is Chilean cherries. Sweet, delicious and juicy, Chilean cherries each winter bring a little sweetness to Chinese consumers — and leave them with a taste of the season’s blessings that runs from their lips to their hearts.”

Today’s celebration was part of a series of events and promotional activities that the Chilean Cherry Committee of ASOEX, with the support of ProChile and co-financing by the Chilean Ministry of Agriculture, will stage over the coming months at wholesale markets, retailers and online channels promoting Chilean cherries under the theme, “Enjoy Your Red Moment.”