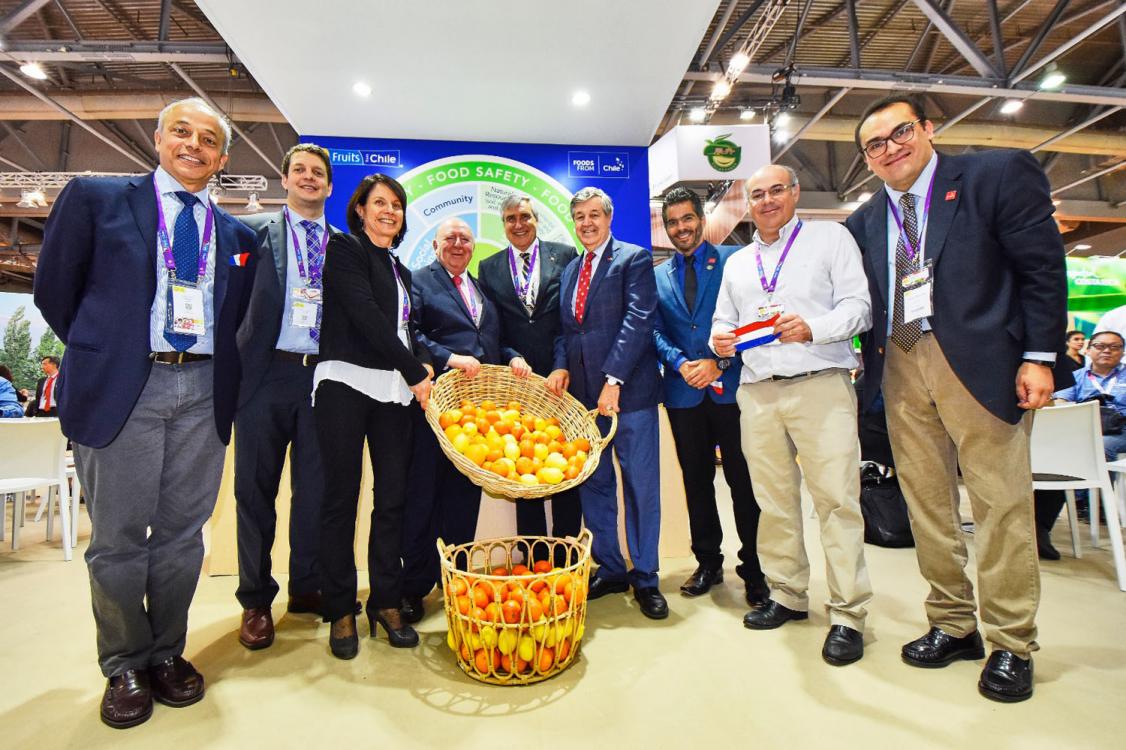 Chilean export promotion bureau ProChile joined together with Chile’s fruit industry in Hong Kong at the Asia Fruit Logistica trade show on September 4-6 to promote the upcoming 2019/20 Chilean fruit export season to fresh produce importers and distributors across the East and Southeast Asia.

Due to its location in the southern hemisphere, Chile plays a key role in supplying consumers across North America, Europe and Asia with quality fresh fruit during winter. With $1.4 billion in shipments in 2018—up more than a hundredfold since 2006—Chile was mainland China’s top supplier of imported fruit by value. In fact, last year, 20% of China’s imported fruit supply came from Chile. The country is China’s number one supplier of imported cherries, grapes, plums, and peaches/nectarines. It is also number two in kiwifruit and number three in apples and avocados.

Asia Fruit Logistica is the premier annual event in Asia for the international trade in fresh produce. The Chile pavilion, organized by the Chilean Fruit Exporters Association (ASOEX), featured the presence of roughly 70 Chilean fresh fruit exporting companies. ProChile supports ASOEX in its international promotion actions and ProChile General Director, Jorge O’Ryan participated in the inauguration of the Chile pavilion.

One of the most outstanding products of this year’s edition of Asia Fruit Logistica was Chilean citrus, which will be authorized to enter the China market from November of this year, when Chinese president Xi Jinping travels to Chile for the APEC Leaders Summit.

This will clear the way for Chile to export oranges, mandarins lemons and other citrus products to China starting during the 2020 citrus season, which typically runs from June to late September or early November. “We are very pleased that Consumers in China can look forward to an expanded choice of safe, high-quality imported fruit after Chilean citrus is approved for import,” said ProChile General Director, Jorge O’Ryan. “China and Chile are this year celebrating 49 years of continuous diplomatic relations. It has been a positive and mutually beneficial relationship and it is important that we continually look for new ways to develop trade ties between our two countries.”

Meanwhile, consumers in China and across the northern hemisphere can look forward to the 2019/20 harvest of other Chilean fruits to begin showing up on the market in November. Among the earliest products that will be arriving in China for the coming season is cherries, the popularity of which has been skyrocketing in recent years. In 2018, Chile accounted for more than 86% of China’s imported Cherry supply.

“Asia Fruit Logistica is, without a doubt, the most important fair for Chilean fruit in Asia,” said ASOEX President Ronald Bown. “It fits very well with the start of our 2019-2020 fruit export season, and  is therefore the perfect setting to officially present the new export season, as well as Chilean citrus fruits, the various ways of consuming them, their important contributions to people’s health and nutrition, and the promotional actions that will be carried out once they start entering China.”

On August 29 to September 3, ProChile organized Chile Week in China 2019, a series of dozens of events in Beijing and Shanghai to celebrate and further develop the diplomatic, economic and cultural relationship between Chile and China.