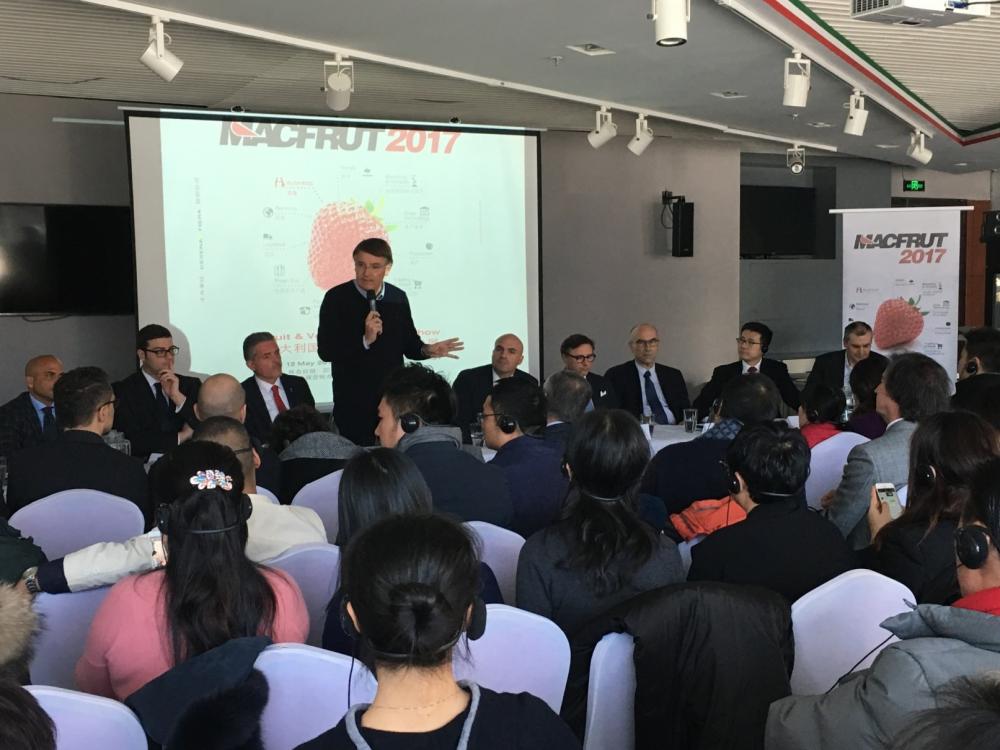 Beijing, 16 January 2017 – Some days ago the Italian Embassy in Beijing hosted the presentation of Macfrut 2017, the international trade fair for fruits and vegetables that will be held from 10 to 12 May in Rimini, Italy, with China as the partner country. The event is part of a roadshow promoting the trade fair internationally – a tour that started last October and has already reached South America and Africa. In front of many Chinese operators and journalists, the representatives of Cesena Fiera – Macfrut’s organisers - presented the innovations of the next edition and explained that Macfrut intends to push the industry toward a new path in which China is bound to become an increasingly strategic market for the Italian and European fruit and vegetable industry.

China has remarkable GDP and consumption growth rates and stands out as a potential market for new types of fruit and vegetable exports, especially with the much anticipated lifting of phytosanitary barriers currently preventing many exports. This trend is already emerging: in 2016, the Italian orange market was opened and the apple and pear market should follow shortly.

The high potential of this market becomes clear if one considers that around 20% of the Chinese population (ca. 1.4 billion people in total) has became wealthy enough to look for high-quality imported produce which carries a sense of local provenance and strong identity. In addition to produce, technology (in which Italy is a world leader) is a subject of interest among China’s leading importers, many of which will be attending the 34th edition of Macfrut.

At the Beijing presentation, several innovations were introduced: on May 10, the opening day of the event, a gala evening will be held for international guests in the charming setting of the Malatesta Castle in Rimini, one of the landmarks of the Italian Renaissance, which combines history, creativity and culture – the three main ingredients of the “made in Italy” recipe. The Basilicata Region – the Partner Region for the 2017 edition – will organise a tour that will give the opportunity to see first-hand some of the most dynamic fruit and vegetable producers in the Metapontino area and to visit Matera, the European Capital of Culture 2019. Private flights from Rimini to the Basilicata city of Pisticci will be available for leading importers.

The 34th edition of Macfrut, the international trade fair for the fruit and vegetable sector organised by Cesena Fiera, will be held at the Rimini Expo Centre from 10 to 12 May. Italy is a leading producer of fruit and vegetables and Macfrut is a platform for promoting Italian excellence in terms of product and services in the context of the global market. More than 1,000 exhibitors (23% of which coming from abroad) are expected to attend this year’s edition in a 44,000 square metre exhibition area in 8 pavilions. Last edition welcomed 38,000 visitors (33% of which were international), which corresponds to a 50% increase compared to the previous edition.