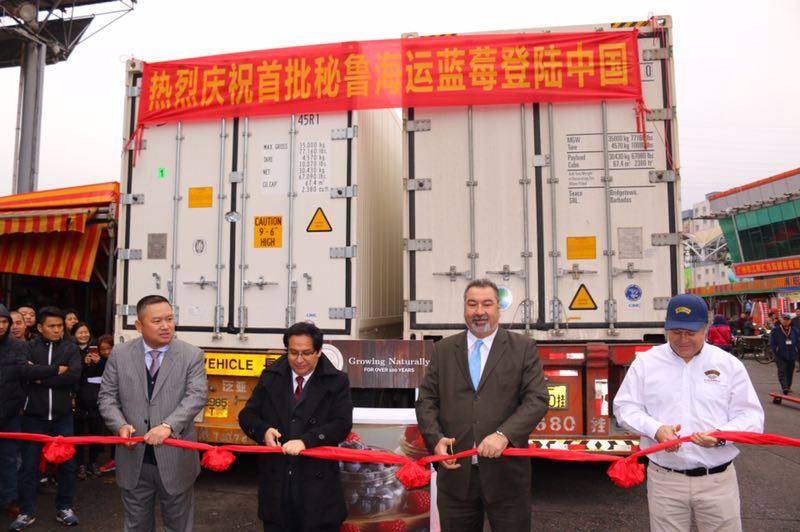 In a sign of Peru’s development as a major blueberry exporter, the first sea freight shipment to China of Peruvian blueberries arrived at Guangzhou’s Jiangnan Wholesale Market on February 24.

The shipment of 3,570 boxes of Naturipe-branded berries were of the company’s proprietary Rocio variety and grown in Peru under a joint venture between Tal S.A. of Peru and Hortifrut S.A. of Chile, one of the four partner producers behind the Naturipe brand.

The berries were shipped from Callao, Peru on January 26 and entered mainland China and cleared customs and quarantine at the port of Shanghai before being transited onward to Guangzhou. The shipment was imported by SVA Fruits (a joint venture between Hortifrut and San Clemente) and is being distributed by Faikee Fruit Company. Upon arriving at Jiangnan Market, various stakeholders held a ceremony in which the shipping container was opened to mark the official arrival of sea freight Peruvian blueberries in the mainland.

According to a statement from SVA Fruits, “the ceremony was attended by the honorable Mr. David Gamara (Consul General of Peru in Guangzhou), Mr. Ye Canjing  (General Manager of the Jiangnan Fruit Market), Mr .Vladimir Kocerha (Trade Commissioner of Peru in Shanghai), Felipe Claro (General Manager of SVA Fruits), Mr. Huang (owner of Faikee Fruit company), as well as many others from a variety of companies. The container was opened while a large crowd of customers and importers looked on, all excited to see this historic arrival that has been greatly anticipated for quite some time.”

Produce Report spoke to Kocerha, who said that Peruvian producers have had export authorization to Asia since 2007, but only began exporting to Hong Kong in 2013. Kocerha says the breakthrough for Peruvian blueberry exports to mainland China came the November 2016 APEC summit when Chinese and Peruvian representatives signed import protocols.

The first air shipment of Peruvian blueberries arrived in China the same month. Formerly, only Chile and Canada had achieved import access to the mainland.

According to David Smith, Operations Manager at SVA Fruit, the ocean freight shipment that arrived on February 24th was relatively small because, although Peru produces blueberries year-round, the main season is already at its tail end. These fruit will mainly be used to conduct tastings and trial sales runs. He expects larger volumes to begin being shipped to China in July when production levels start to rise again.

With around 4,800 hectares under plantation, Peru’s blueberry output and exports have been rising rapidly in recent years. In 2015, Peru exported 11,327 tons of blueberries. That figure rose to 17,547 tons in the first 11 months of 2016.

“China has the potential to quickly become one of the most important markets for Peruvian blueberries,” says Kocerha.

The Commercial Office of Peru in Shanghai revealed to Produce Report that blueberries from Camposol of Peru will also soon be arriving in China and that Camposol is also planning to open a branch company in Shanghai this year.