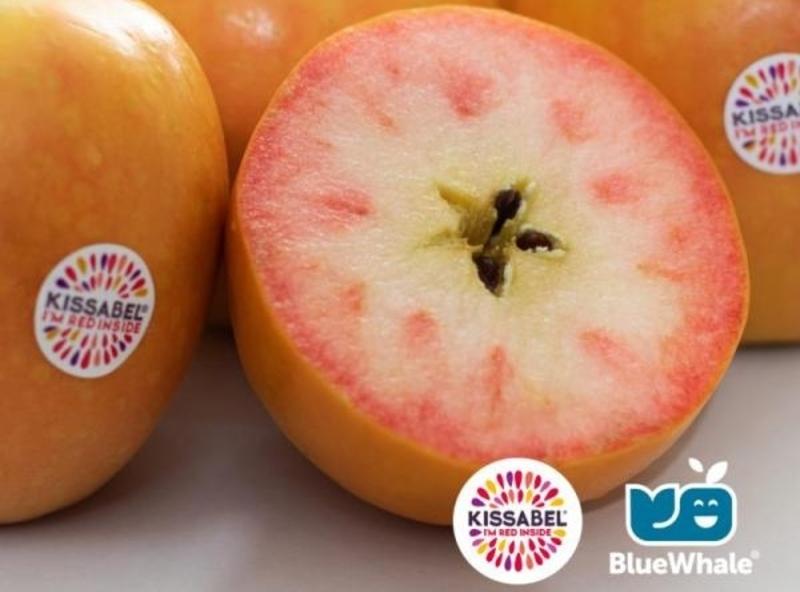 According to Jeanson, Kissabel apples were created by the IFORED Group using natural cross-cultivation techniques, with the product range currently including three varieties: Rouge (red), Orange (orange) and Jaune (yellow). By cross-breeding red-fleshed apples with sweeter varieties, the researchers were able to achieve apples with flesh ranging from pink to scarlet.

“The difference [between the three Kissabel varieties] comes from the redness of the flesh, the taste as well as the skin color,” said Jeanson. Kissabel Rouge has red skin, red flesh and a vibrant berry-like flavor, while Kissabel Jaune possesses a crisp texture and pink flesh with a refreshing and sweet flavor. Finally, Kissabel Orange, which has just entered the Chinese market with its first shipment of five pallets, has a pink-red heart and a balanced taste.

Jeanson stated that although red-fleshed apples have been around for a number of years, they have long been considered unpalatable owing to their naturally sour flavor. Through years of selective cross-cultivation, however, Kissabel apples have been bred to be sweeter while maintaining their distinctive red flesh.

Blue Whale has produced approximately 700 metric tons of Kissabel apples this season. In Asia, Kissabel apples will be marketed via retail, wholesale, social media and other channels to promote their uniqueness to local consumers.

According to Jeanson, although Blue Whale apples presently have only a niche market share in China, the company remains extremely optimistic regarding the Chinese market. Blue Whale has registered its premium orchards with Chinese customs in accordance with phytosanitary regulations, allowing the company to supply the Chinese market. The next step for Blue Whale will be to begin importing its Candine apples, and the company is confident that this variety’s crisp, juicy texture and candy-sweet flavor will quickly win the favor of Chinese consumers.

Established in 1950, Blue Whale is France’s premier supplier of apples, selling approximately 240,000 metric tons of apples each season. The company has 50 years of export experience, shipping apples to over 70 countries around the world. Blue Whale currently has nine apple varieties that are certified organic and plans to expand its organic orchard area to 500 hectares (9% of its total growing area) by 2023. In addition, Blue Whale advocates the growing of fruits with zero pesticide residues under the “Zéro résidu de pesticides” brand and last year harvested 1,500 tons of its Ariane browning-resistant apples and 400 tons of kiwifruit under this label.