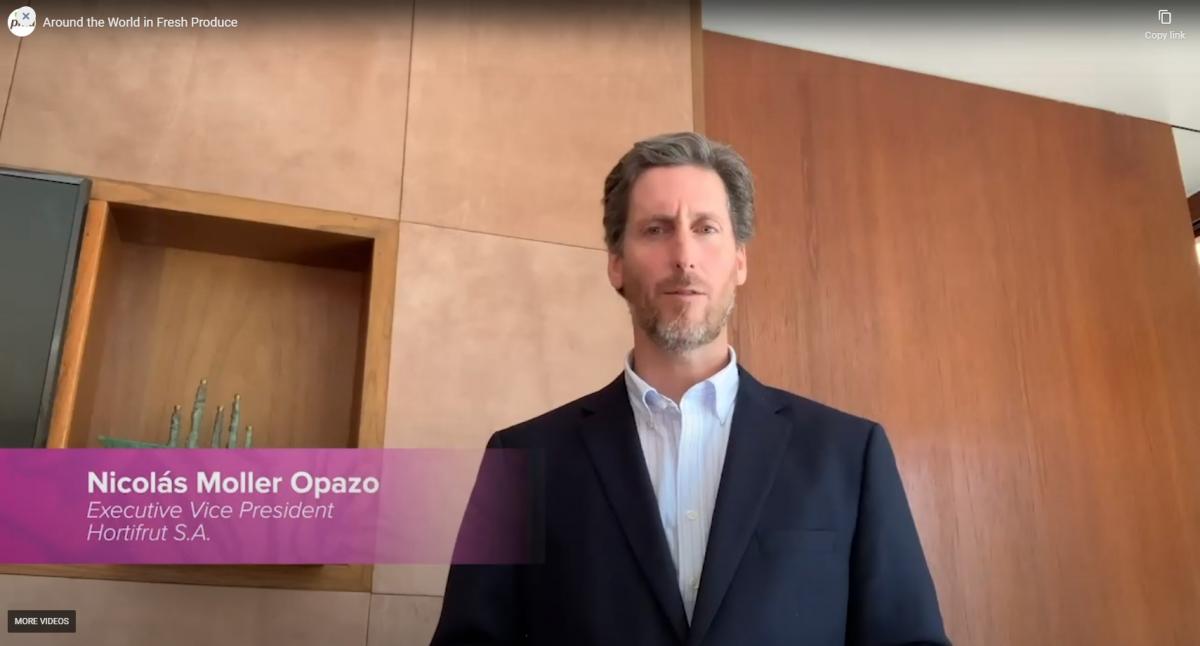 PMA Fresh Summit, North America’s largest fresh produce industry exhibition, went virtual for its 2020 edition on Oct. 13–15, with thousands of buyers and sellers from around the world and across the fresh produce and floral supply chains coming together virtually to do business, network and learn.

The event’s host, the Produce Marketing Association, is a U.S.-based organization with global membership, including several companies in Produce Report’s home base of China. It was therefore fitting that Day One of Fresh Summit last Tuesday saw a streaming video informational session titled, “Around the World in Fresh Produce: An Update on International Challenges and Opportunities,” hosted by PMA Vice President Nancy Tucker and featuring speakers from Asia, Europe and South America offering their perspectives on the topic.

In terms of the COVID-19 pandemic and its impact on global economic growth, resilience and adaptability in the face of unprecedented challenges were the through lines among the three speakers’ remarks about the fresh produce industry’s response to the pandemic.

Early on, growers, distributors, supermarkets and other companies working in the fresh produce supply chain around the world were labeled as essential businesses and allowed to continue operation during various movement control orders. Indeed, societies were depending on them to keep the supply of fresh fruits and vegetables flowing to their populations.

“In those first days of mass hysteria, we registered increases in demand of more than 100% for many products,” said session speaker Fernando Gomez, director general of ProExport in Spain. “And everyone from the field to the supermarket was able to respond with solvency.”

The pandemic has impacted consumer behavior in Europe, said Gomez, though he was quick to point out that Europe is large, diverse and resistant to sweeping generalizations. Overall, people are cooking more at home and more focused on health and wellbeing. Meanwhile, the pandemic’s economic fallout could be leading consumers to cut back on spending, driving demand for more bulk purchasing and basic products as opposed to specialty items, predicts Gomez; this could squeeze suppliers’ already thin margins as they face simultaneous higher costs from worker and food safety measures implemented in response to the pandemic and pressure from supermarkets trying to keep prices down for their customers.

A notable aspect of the session, however, was how little overall emphasis was placed on the pandemic. Instead, each of the three speakers touched at times on two long-term produce industry challenges that predated COVID-19: food supply sustainability and political instability.

“COVID in a way really highlighted how fragile and how delicate our whole system is,” said Nicolás Moller, executive vice president of Hortifrut, a major Chile-based berry grower and exporter. “So that’s why I believe the first mega-opportunity impacting our business is sustainability … consumers are looking to us to bring solutions to the world’s major threats, such as the climate crisis.”

Moller went on to note that the agriculture industry probably accounts for a quarter of global carbon dioxide emissions and that, “reducing these emissions will require changing how we farm, how much we waste, what we eat and how we manage our natural resources.”

Other sustainability issues touched on during the presentations include the European Union’s Farm to Fork Strategy and emerging policies in China aimed at reducing food waste in response to food price inflation.

Another topic Moller referenced in his comments was rising protectionism — which he cited as a worrying trend for a small country like Chile with a high reliance on agricultural exports and on which he fielded a question related to news of an impending U.S. International Trade Commission probe into blueberry imports.

Protectionism and political uncertainty were also major themes in remarks by session speaker Patrick Vizzone, Head of Food, Beverage and Agribusiness and Head of Hong Kong at ANZ Banking Group, who joined by video from Hong Kong. In the face of greater protectionism and political uncertainty, “I believe we will continue to see a continued pivot toward trade blocs,” said Vizzone. “So you’ve got the Americas, you’ve got Europe, you’ve got Asia-Pacific. And the percentage of trade within those blocs is likely to continue to increase, albeit with strategic corridors,” between the blocs such as fresh produce exports from South America to China.

Vizzone also made two predictions specific to Greater China in the midst of the uncertain trade environment: a greater focus on multipoint origination of fresh produce and a shift toward producing domestically in China for the Chinese market. If either or both of these trends hold true, they will certainly have big implications for global fresh fruit producers who deal with the China market.

Fresh Summit will continue to be available online through Nov. 13.