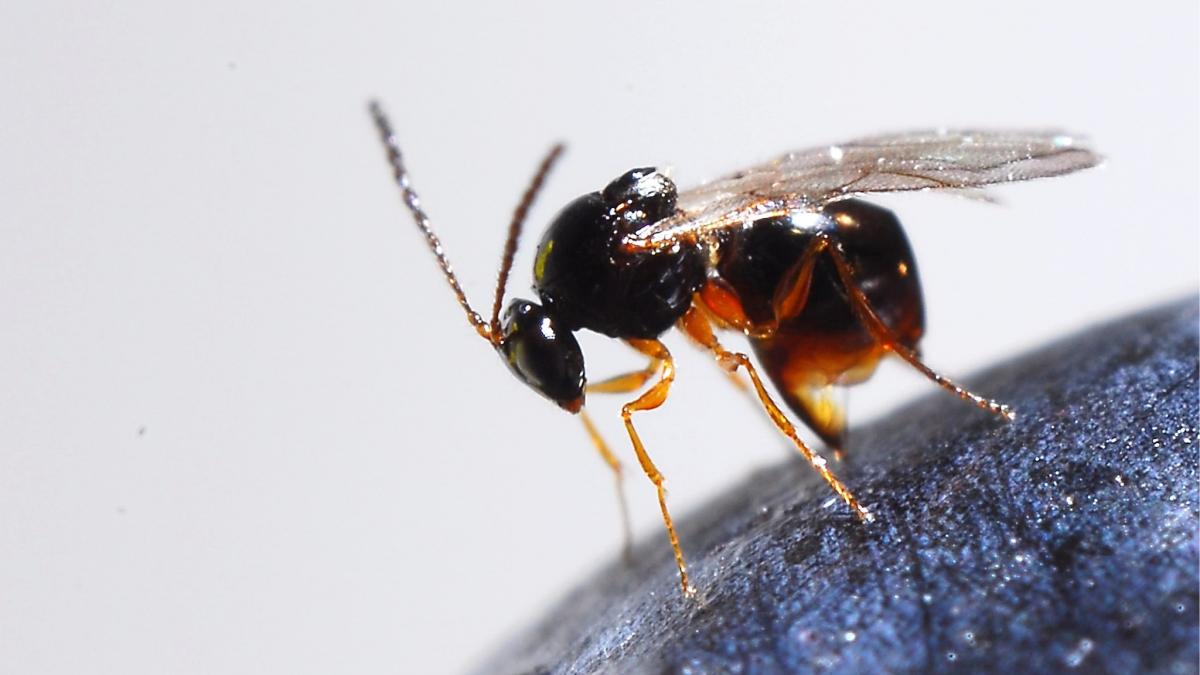 This content has been published as provided by its author, Kym Pokorny at Oregon State University. It has only been modified from its original version to follow Produce Report editorial guidelines and for necessary website formatting.

Corvallis, Ore., June 6, 2022 – After 12 years of research, a parasitic wasp that controls a highly destructive fruit fly will be released by Oregon State University agricultural scientists in June.

Vaughn Walton, Extension entomologist and professor in the College of Agricultural Sciences, said the U.S. Department of Agriculture has permitted release of the wasp (Ganaspis brasiliensis), a slow process that took more than 10 years from application to decision. Now that it has a permit, Walton’s lab, which is part of the OSU Agricultural Experiment Station, is raising enough wasps to make a dent in the spotted wing drosophila (SWD) population in Oregon.

An invasive insect from Southeast Asia, the spotted wing drosophila arrived in Oregon in 2009 and soon became a major pest of soft fruit crops like cherries, peaches, figs, blueberries, strawberries, raspberries, blackberries and wine grapes. Damage from the invasive insect costs the country’s agricultural industry approximately $500 million a year. Especially disquieting is its affinity for blueberries, which is Oregon’s ninth-most valuable crop at $120 million in 2020. Management of spotted wing drosophila in the blueberry industry alone costs growers $100 million a year nationwide.

“This will have a huge impact,” Walton said. “Spotted wing drosophila is very difficult to control. It’s got a very, very high reproduction rate with many generations per year. Because of that, when using pesticides, they have to be applied constantly, sometimes two or three times a week. Growers are really interested and are excited about a biological control that will work along with cultural management tools to decrease SWD and not cost them any money. It’s a natural resource available to them. We think this is going to change things.”

“The wasp helps, but you must do the other things as well,” said Walton, who led the team that discovered the wasp in South Korea, one of its native habitats. “None can stand on its own. I had a call from a grower who was doing everything right and he wanted to know if he could spray less pesticides. Even removing one application is a significant cost savings — $150 an acre. That’s a lot of savings if you do all these things together.”

Spotted wing drosophila, a tiny fruit fly that resembles those that hover over rotting fruit in summer, is well suited to the Willamette Valley climate. About 95% live in areas surrounding non-crop habitats that act as pest reservoirs for reinvasion of the crops. That’s where the wasp will be released.

The adult female fly lays her eggs — up to 600 per year — within ripening fruit, said Ryan Chave, a graduate student who works with Walton. When the larvae emerge, they burrow in and start eating the fruit from the inside out, causing damage that results in severe crop losses.

The parasitoid wasp kills SWD by laying eggs inside the insect and when the wasp hatches, its larva consumes its prey, Chave said. Spotted wing drosophila populations can be kept at a bay at a rate of up to 65% when the parasitoid wasp is there to check it, according to preliminary data.

“We’ll never take down the entire fly population,” Walton said. “But as SWD increases there’s more food for the wasp. In the field if you have a bunch of SWD attack a crop and reproduce, as they increase there it gets larger and larger.”

Though not native to Oregon, a few of the parasitoid wasps were found in Oregon and allowed the researchers an opportunity to study them in the field. They’re confident it will not become an invasive pest problem since G. brasiliensis is a specialist — in other words it only feeds on SWD, said Walton, who worked closely with Jana Lee of the Oregon Department of Agriculture. He also collaborated with colleagues at University of California, Berkeley. Walton has studied another Asian wasp (Pachycrepoideus vindemmiae) that has promise but not as much as G. brasiliensis because it’s a generalist and will kill other insects in addition to spotted wing drosophila.