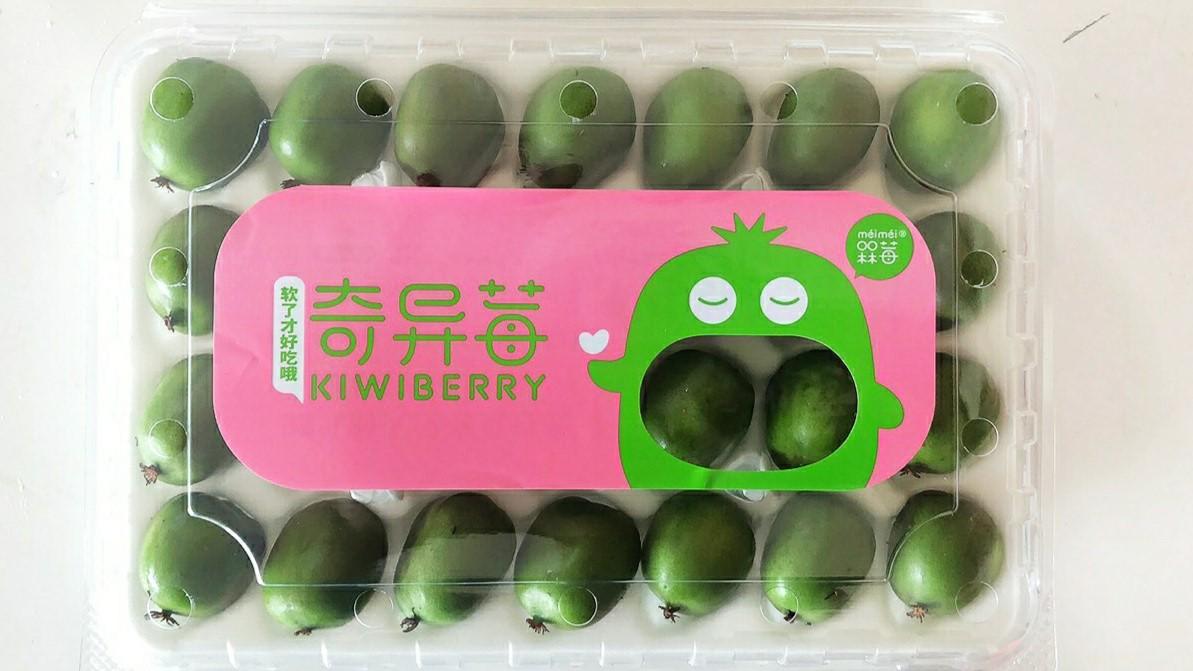 September is the time when China’s domestically grown kiwifruit begin to hit the market. However, prior to the arrival of kiwifruit, a fruit resembling them has already been on the supermarket shelves for around a month.

Kiwi berries (Actinidia arguta), as the name implies, look like a miniature version of traditional green kiwifruit. They are about the size of large grapes with a smooth and edible skin. The taste of kiwi berries is quite complex; they are often slightly sweeter than kiwifruit but still retain a light acidic flavor.

As a fruit native to China, wild kiwi berries can be found in a number of provinces throughout the country. Even so, commercial cultivation of the fruit did not kick off in China until a decade ago. Meanwhile, owing to a relatively high loss rate during storage and transportation, kiwi berries are rarely seen on the Chinese market. Prior to 2016, kiwi berries from foreign countries could fetch up to 600 Chinese yuan ($93) per kilogram.

Recently, Produce Report connected with two industry insiders to gain an insight into this niche fruit.

Fan’s kiwi berries made their initial market debut in 2016 and came into commercial production two years later. Now, they are available from multiple retailers, including offline channels such as Sam’s Club, Costco, Hema Fresh, Ito Yokado and Ole and online platforms such as Dingdong Maicai and MissFresh.

At present, InnoFresh Agriculture has approximately 27 hectares of self-owned orchards in the city of Ya’an in Sichuan province, alongside investments in a further 120 hectares of kiwi berry orchards in provinces including Sichuan, Yunnan, Hunan, Hubei and Zhejiang.

Because all of these plantations are located in southern parts of China, InnoFresh’s kiwi berries can reach the market in early August, one month earlier than those of most competitors, and remain in supply until late October. The company is also endeavoring to bring the start of the supply season even further forward to late June in coming years as production continues to be scaled up. In addition to creating greater availability, keeping multiple orchards over a large geographical area helps mitigate climate risks.

In a second interview with Frutacloud (好果云), a leading B2B fruit company, Patty Li (黎钰贞), the company’s commodity manager, remarked that in comparison to fruits such as kiwifruit and blueberries, the kiwi berry industry is still in the initial stages of development, which means that the fruit is largely restricted to the high-end market at present, even though prices have been gradually coming down in recent years. A variety of factors, including limited production, high planting cost, short shelf life and high loss rate, currently leave very little room for the price to drop further.

Li’s comments were well echoed by Fan. As a pioneer in the kiwi berry industry, InnoFresh has to find its own path with respect to issues such as varietal development, post-harvest practices, supply chain management and market promotion, with almost no existing expertise to draw upon. Despite the challenges ahead, both interviewees expressed their belief that the market prospects for kiwi berries in China over the long term still look very bright.