As Chile and China this year mark the 50th anniversary of their establishment of diplomatic relations, Chilean officials and the Beijing Xinfadi Agricultural Products Wholesale Market teamed up on Dec. 16 to celebrate the arrival at the market of the first ocean shipment of fresh Chilean cherries for the 2020/21 season. This event signaled the beginning in earnest of the sales season in northern China of this hugely popular product, as well as demonstrating a return to some level of normalcy for Xinfadi market, which was battered half a year ago when it was shut down after the discovery there of a mysterious COVID-19 cluster.

Last week’s event featured a host of representatives from the Chilean government and fruit industry, as well as executives and over 100 fruit traders from the market. It followed by one day the Dec. 15 arrival of the market’s first container of ocean-shipped Southern Hemisphere cherries for the 2020/21 season. The container had arrived to port and cleared customs one day prior in the southern city of Shenzhen before being shipped to Beijing by truck. That first container of cherries was opened at the market and sold out within 15 minutes, according to representatives from the market.

“As the purchasing power of young Chinese consumers has risen in recent years, they are upgrading their product choices,” said Zhao Zhigang, manager of the Beijing Xinfadi Agricultural Products Exhibition Center, which hosted the event. “And imported fruits are clearly attractive to this consumer group and rising in popularity — especially high-end fruits such as durian and cherries.”

Xinfadi market is the Chinese capital’s largest fresh produce wholesale market and a key distribution point in northern China for imported fruit. Zhao noted that traders at Xinfadi transacted almost 2 million tons of imported fruit in 2019 with a total value of 44.3 billion Chinese yuan ($6.8 billion). Among these imported fruits were approximately 1,300 containers of cherries, the majority of which originated from Chile. Chilean cherry exporters participating in the cherry arrival celebration at Xinfadi market included Garces Fruit, Prize and Rio King.

The event demonstrated that many parts of business are back to normal at Xinfadi after authorities ordered it shuttered in June following the discovery of an unexplained cluster of COVID-19 cases. This revelation prompted a large-scale lockdown in Beijing and disrupted fresh fruit distribution throughout northern China. With over 100 infections associated with the cluster, it was one of the largest instances of community transmission in China since the epidemic was initially brought under control. The market eventually began a phased reopening in August.

Chinese authorities have since imposed a variety of oversight and hygiene requirements on imported refrigerated and frozen foods in response to concerns that several unexplained COVID-19 clusters associated with cold chain food importation and distribution facilities may have originated from contaminated frozen meat and seafood shipments.

Although refrigerated imported products such as fresh fruit are widely considered by experts to pose no risk of COVID-19 transmission, the Chilean industry has nevertheless strengthened its already rigorous health and hygiene measures throughout the supply chain, from the orchard through to the packing house and loading of containers, according to Natalia Cortés García, commercial director of Chile in Beijing for the Chilean export promotion agency, ProChile. For example, every shipping container is sterilized prior to loading with cherries.

Putting traders and consumers in China at ease regarding the safety and nutritional value of Chilean cherries is a top priority for Chile’s cherry exporters, which typically send almost 90% of their exports to China each season. This season, the preliminary forecast of the Chilean Cherry Committee of the Chilean Fruit Exporters Association (ASOEX) is that Chile’s total cherry export volume in 2020/21 will rise by roughly 35% to over 300,000 tons, with the export volume to China also set to rise.

Chilean cherries have over the past decade developed into a hugely popular wintertime product in China, which has a strong culture of fresh fruit gifting and consumption. The tradition of eating imported cherries during the holidays has even spawned the phrase “cherry freedom,” which refers to having a lot of disposable income, such that one may freely indulge in imported cherries at one’s own pleasure.

Although Chilean cherries shipped by air have already been on the market in China for several weeks, the arrival of ocean shipments is significantly increasing volumes, reducing prices and bringing “cherry freedom” to more consumers in China. 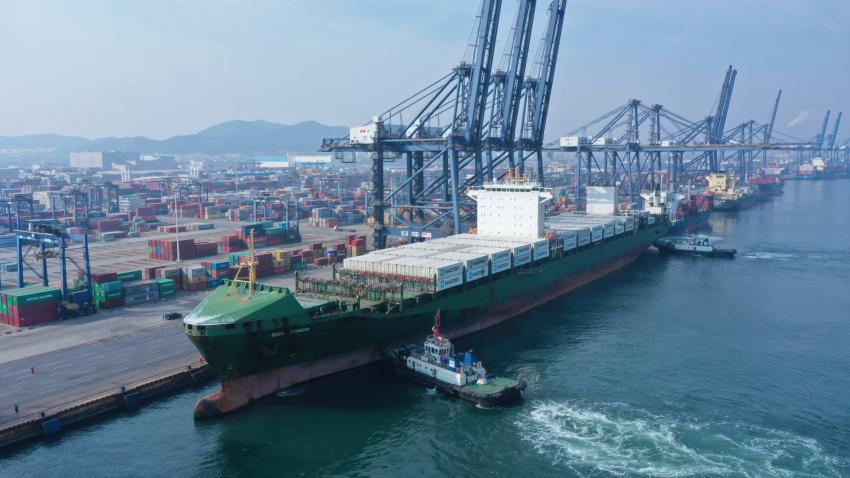