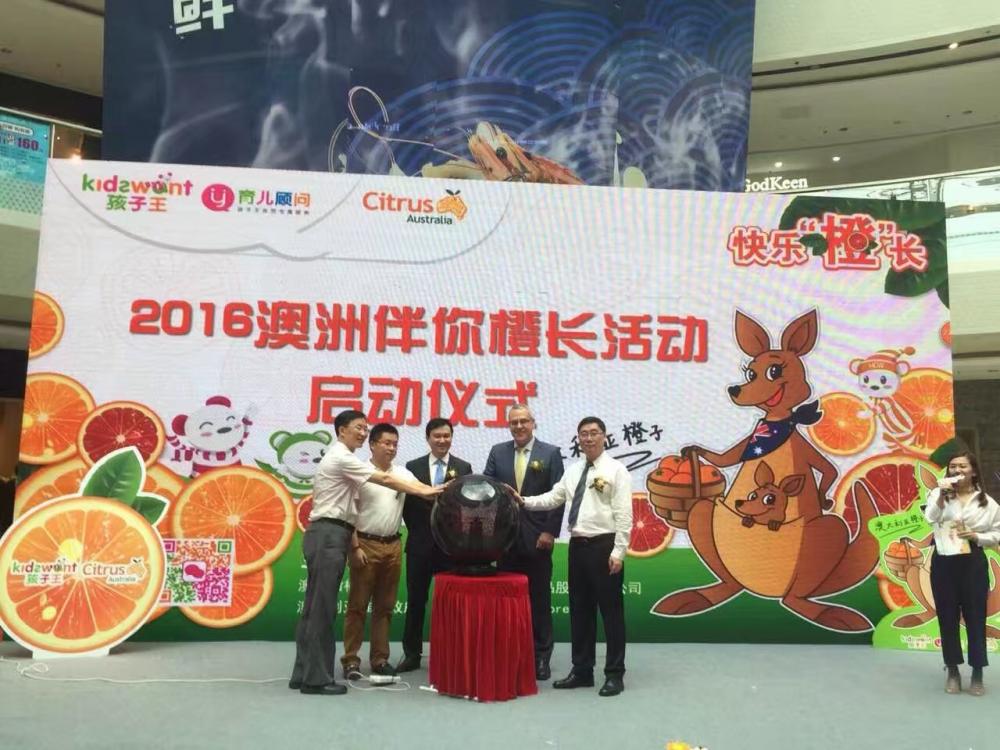 “2016 Growing Up with Australian Oranges” made its debut at Nanjing Jiangning Wanda Plaza on August 7. Officials from the Victoria State and representatives from Citrus Australia, Kidzwant, and Fruitmore jointly announced the starting of the promotional campaign.

According to Tim Dillon, Commissioner for Victoria to China, Kidzwant is one of the partners of choice for Citrus Australia. Citrus Australia is attracted by Kidzwant’s professional and mature one-step shopping system for maternal and infant supplies. Kidzwant’s young and high quality clientele is expected to offer more opportunities for further cooperation in the future.

The Fruitmore Group was established in 2010. Its core businesses include selling fresh fruits online (those the company represents as distributor and those of others) and offline delivery (to juice shops, fresh fruit supermarkets, restaurants and business enterprises).

“Nanjing is where Kidzwant originated and has its headquarters, with good customer base. Hence it is chosen to be the place for the first leg of this promotion. Similar promotions in Kidzwant’s stores in Shanghai and other places will be organized.”Produce Report was told.

Kidzwant opened its flagship store on December 18, 2009 at the Nanjing Jianye Wanda Plaza. It has since evolved into an integrated operator of online APP plus offline physical stores. In the area of cross-border business, its model combines bonded warehouse and overseas direct mail. Its main focus now is establishing a global supply chain. Kidzwant is currently sourcing products from 16 different countries and regions.