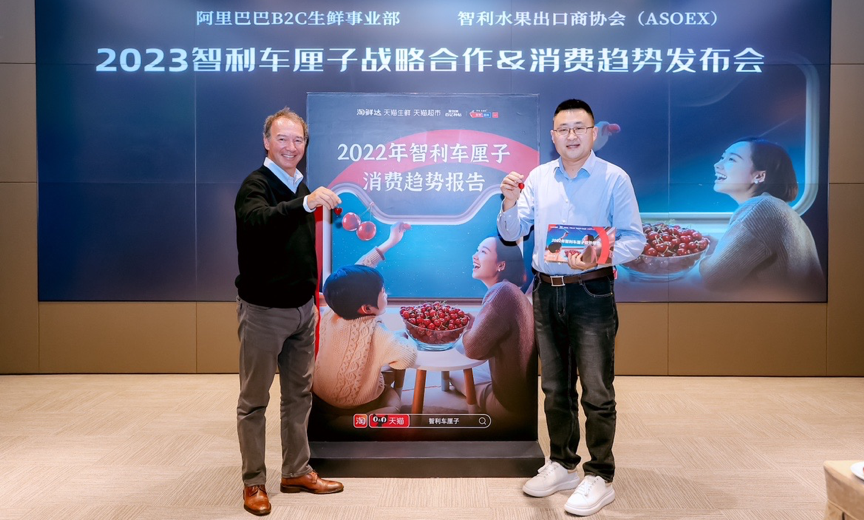 On Jan. 13, Alibaba Group and the Chilean Fruit Exporters Association (ASOEX) held a strategic cooperation conference at the Alibaba Group headquarters. In 2023, which represents their ninth year of strategic cooperation, the two sides will deepen their collaboration in market planning, facilitating fruit purchasing, supply chain management, and online-to-offline retail expansion, while jointly building further demand for Chilean fruits in the Chinese market.

As a non-profit trade organization, ASOEX and its partners account for 90% of Chile’s fresh fruit exports. With respect to the continued cooperation with Alibaba, ASOEX’s president, Iván Marambio, said, “We are very happy to return to China after three years and have face-to-face communication with our partners. The cooperation between ASOEX and Alibaba began in 2015, and we cherish the friendship of cooperation over the past eight years. ASOEX will continue to actively invest to increase the demand for Chilean cherries, blueberries, stone fruits, table grapes and citrus in the Chinese market, and allow more Chinese consumers to love Chilean fruits through offline and online channels.”

Meanwhile, Peng Yue, senior director of Alibaba Group’s B2C Fresh Business Unit, commented, “Every year around the Spring Festival, the imported fruits represented by Chilean cherries are deeply loved by domestic consumers. In recent years, the sales of Chilean cherries on Tmall have continued to grow at a high rate of 60%. There is still a lot of room for the growth of cherries in the Chinese market.” This year, Alibaba Group’s B2C Fresh Business Unit and ASOEX will deepen their cooperation in consumer insights and release annual reports on Chilean fruit trends based on big data collected by the Alibaba Group alongside consumer surveys to enable both parties to engage in more effective market planning and promotional activities.

The platforms operated by Alibaba Group’s B2C Fresh Business Unit are among the preferred channels used by Chinese consumers to purchase Chilean cherries online. Every year when the first shipment of Chilean cherries arrives in China, it is launched simultaneously on the Tmall and Tmall Supermarket platforms. Alibaba’s Juhuasuan platform also recently announced a promotional program to allow more consumers to enjoy high-quality Chilean cherries at an attractive price.

At the meeting, ASOEX and Alibaba Group’s B2C Fresh Business Unit released this year’s “2022 Chilean Cherry Trend Report.” The report showed that Chile is the world’s largest cherry exporter in terms of volume. Despite a recent decrease in the export volume of Chilean cherries due to the pandemic, the total volume still exceeded 350,000 metric tons in the 2021/22 season and is expected to reach 400,000 metric tons in the 2022/23 season. China is the main export destination for Chilean cherries, accounting for almost 90% of total exports. 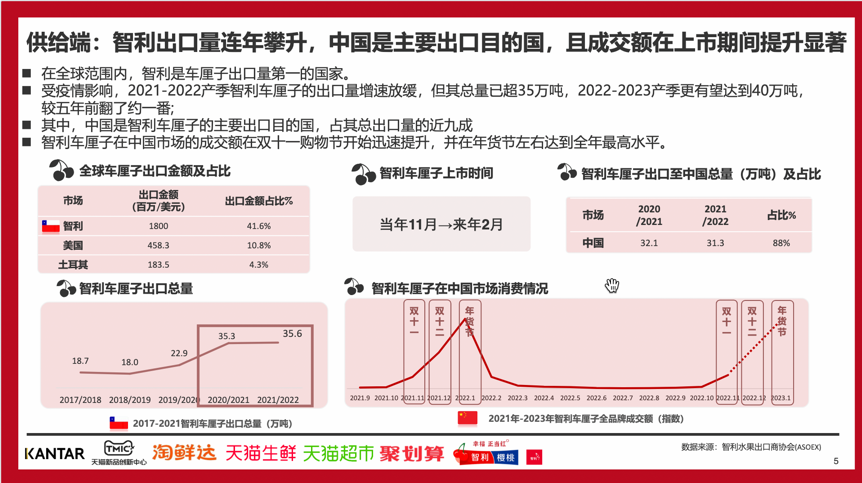 Among the consumers who buy Chilean cherries through Tmall, nearly 60% are women, while young adults aged between 25 and 34 years account for almost 50%. Nearly half of the customers live in first- or second-tier cities. The main reasons that consumers reported for preferring the Tmall platform included “having the variety/size they want to buy” and “timely and good after-sales service.”

The report also revealed that cherry consumption by young and middle-aged people in third- and fourth-tier cities has increased year by year, indicating good opportunities for enormous future growth. At the same time, with the increasing popularity of outdoor activities, “traveling with fruit” has become a new growth opportunity for cherry consumption.

In this regard, Alibaba Group’s B2C Fresh Business Unit will this year explore the bulk purchasing model and cooperate with Taobao Tmall merchants, Tmall Supermarket, Taoxianda sellers and exporters partnered with ASOEX to improve the quality and service experience and meet the consumption needs of various consumer groups in first- and second-tier cities and below.

At the same time, to cater to consumer demand for the fast delivery of fresh fruits and vegetables and the new consumption trend of traveling with fruit, Alibaba Group’s B2C Fresh Business Unit will focus on the online-to-offline business Taoxianda to provide a rapid one-hour delivery service so that consumers can easily eat fresh Chilean fruit anytime and anywhere in their busy life, further boosting the consumption of Chilean fruit.