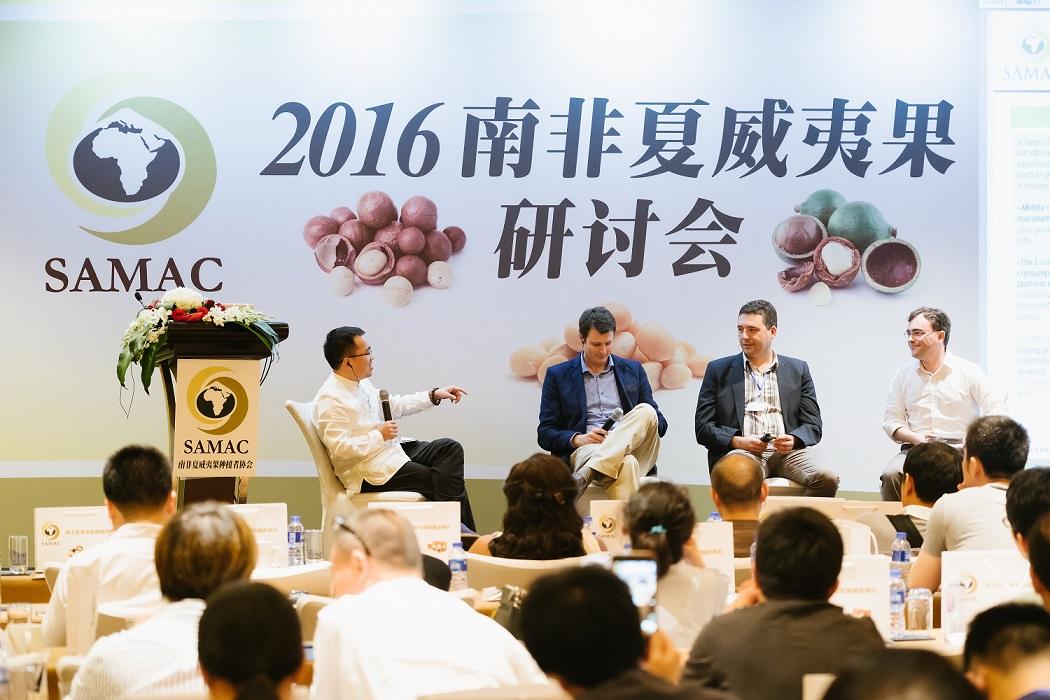 Yu Zhongwu, President of Lin’an Nuts and Roaster Association, said during the welcome speech, “I am honored to be at this seminar. I visited South African macadamia plantations and was amazed at the culture and trade of nuts. At present, China’s nut market is still primitive, where the price war is fierce and with low added value. But, with a huge consumer market, it is still lucrative. This means more international cross-border communication and cooperation are needed. The first South African Macadamia Seminar in Shanghai provides those who are still not familiar with the product a great opportunity to know more about it.”

According to Mr. Christie, “South Africa is an amazing land with rich soil, beautiful views, and adventurous safari. The eastern part of the land is where macadamia nuts are produced and now it is well known in the world as a treasure house of nuts.”

South Africa is the biggest exporter of macadamia nuts globally and production is still developing at a rapid pace, with an increase of 1,500 hectares per year. SAMAC has 470 members, out of the 500 total planters of macadamia nuts.

However, that does not mean that the production of these nuts is easy. Pests, plant diseases, droughts, and storms can all result in unsuitable nuts that are either too small in size or too thick in shell. Another common problem is theft. Due to the drought for example, production this year could decrease by 15 percent and the negative influence might last until 2018. According to Mr. Christie, “that requires us to invest more in scientific research so as to combat the challenges.”

Apart from natural challenges, Mr. Giuricich also mentioned the trade barrier that African nuts have to face. Since the Sino-Australian Free Trade Agreement came into effect, Australian macadamia nuts enjoy an import tax of 14.9%, while that for South Africa stands at 19%. This requires both governments and those in the industry to work together so that Chinese consumers will eventually be able to enjoy more macadamia nuts from South Africa.

South African macadamia nuts have started to enter mainland China, Hong Kong region, Vietnam, and other far eastern countries since 2009, with sales in this region constituting half of South Africa’s production and standing at over 20,000 tons.

Mr. Giuricich explained how macadamia nuts are rich in phosphorus, calcium, iron, vitamins B1 and B2, and eight amino acids, and are attractive with their smooth and fragrant taste.

Thanks to the fast development of the Asian market, exports of such nuts have enjoyed a tenfold increase over the past six years. The US and Canada remain the largest macadamia kernel market, with Europe, the Middle East, and Japan following. In 2009, kernels maintained their fast increase rate with a production of around 22,000 tons and surged to a historic high of 26,000 tons in 2014.

Matthieu David, CEO of Daxue Consulting, revealed a research result at the seminar, saying that actually such nuts are also planted in China’s Yunnan Province and are welcomed by middle-class consumers.

He said that New-generation consumers tend to buy healthy, high-protein, safe, and high-quality food and prefer nuts in shells very much due to the safety and hygiene factors. Apart from nut in shell, kernels and oil are two of the other main forms of this product.

However, in the four cities of Beijing, Shanghai, Guangzhou, and Chengdu, out of 900 consumers surveyed, half of them were not aware of African macadamia nuts. Mr. David said, “Chinese consumers prefer high-quality, good-price, and nutritious food now and turn to buy online very much, and all these leave a potential market for African macadamia nuts to develop further.”

Chen Yuxiu, President of the Yunnan Nuts Association, said that there are two million hectares of macadamia nuts being planted in Yunnan. She said, “Consumers tend to care more about quality and health, and only by selling good-quality products can we win the market. And that means those in the industry need to protect the nut quality, and plant, process, and sell top-quality nuts, so as to help the industry to boom.”

In the interactive session, Yu Zhongwu hosted the discussion on the challenges and opportunities for South African macadamia nuts. Participating enterprises posed questions on the planting standards, varieties, sourcing, and production of such nuts. Furthermore, many consider South Africa as their preferred sourcing destination, due to the high-quality products grown there. Moreover, they hope to cooperate more with suppliers to further expand on China’s consumer market.

Mr. Giuricich advised interested parties to visit www.samac.org.za to view the name list of exporters and processors with a good reputation and high credibility. Meanwhile, Mr. Christie advised that it is not recommended to buy directly from plantations, since most of them do not have adequate processing capabilities and are therefore unable to ensure the end-product quality.