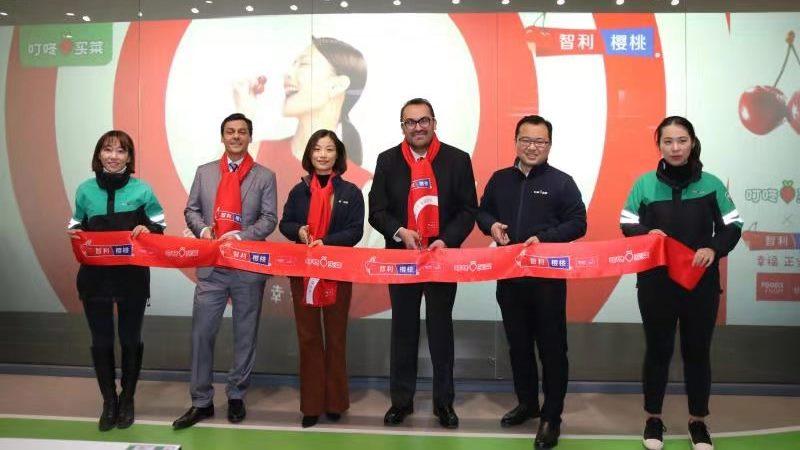 Recently, Chile’s cherry industry has begun working together with Dingdong Fresh in the latter’s first promotional endeavor with a foreign fruit industry. On Dec. 9, representatives of the Chilean Cherry Committee held a ribbon-cutting ceremony at Dingdong’s headquarters and formally kicked off a campaign of bumper sticker advertisements for Chilean cherries on Chinese taxi cabs.

Zhang affirmed that it will be possible to purchase many popular fruits via Dingdong’s platform. Shanghai’s total fruit consumption is high, as is the market demand for cherries. Chile’s high-quality and affordable cherries are therefore expected to prove very welcome on the Chinese market, with ASOEX and Dingdong Fresh acting as the bridge between Chilean producers and the dining room tables of Chinese consumers. 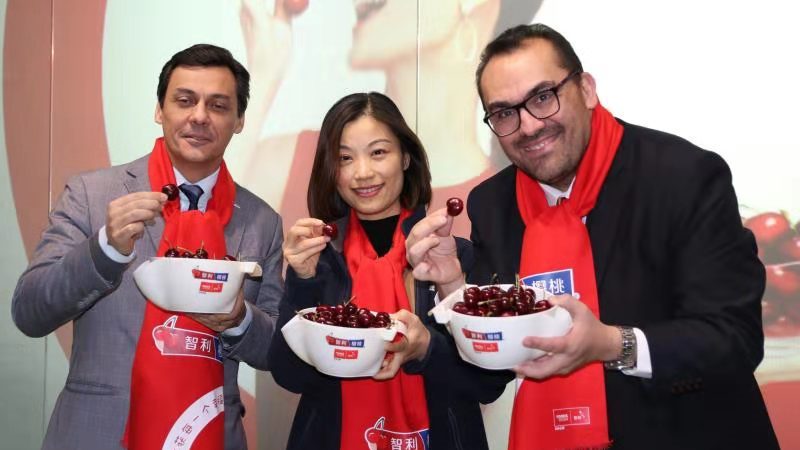 On the day of the ceremony, ASOEX and Dingdong Fresh held a brief seminar, during which Carvajal reported that Chile’s cherry exports are expected to break records this season. Global exports of Chilean cherries are estimated to reach 210,000 metric tons — an increase of 16.7% from last season’s 180,000 tons. More than 80% of these cherries are destined for China’s fruit markets. Owing to their superior quality, Chilean cherry exports are dominating the global market, which comprises more than 100 exporting countries. In addition to cherries, Chile also produces an abundance of blueberries, plums and grapes, among other fruits, that it supplies to global markets.

Zhang believes that China should not only fill its supply chains with Chile’s high-quality products but also learn from Chile’s agricultural management and production experience to enrich China’s own agricultural knowledge.

Dingdong Fresh enforces stringent quality standards, and to provide its customers with high-quality and affordable products, it plans to further extend its purchasing chain. The company is currently establishing new growing bases all over China and eventually plans to expand internationally with a little help from Chile.

The Drop in Consumption Is Only Relative

Although the Chinese market has seen a decrease in consumption this year, Zhang does not believe that this represents a trend of total decreasing market consumption.

China’s economy is highly concentrated, and large cities like Shanghai are capable of maintaining strong consumer growth trends. The decrease in consumption is purely relative to historical rapid growth. From a global perspective, the Chinese market is still developing rapidly.

As the average income of Chinese citizens continues to increase, consumer standards are naturally evolving. Chinese people’s love for natural foods is reflected by fruit consumption trends — quality, quantity and variety are all increasing. Cherries are considered a high-end fruit and are typically representative of increased fruit consumption.

According to Zhang, Dingdong Fresh has experienced rapid growth in recent years, with a revenue of 740 million Chinese yuan last year and a predicted revenue of 6 billion yuan this year. Next year’s forecast indicates even more geometric growth, of which fruits are expected to account for a high proportion of total revenue. 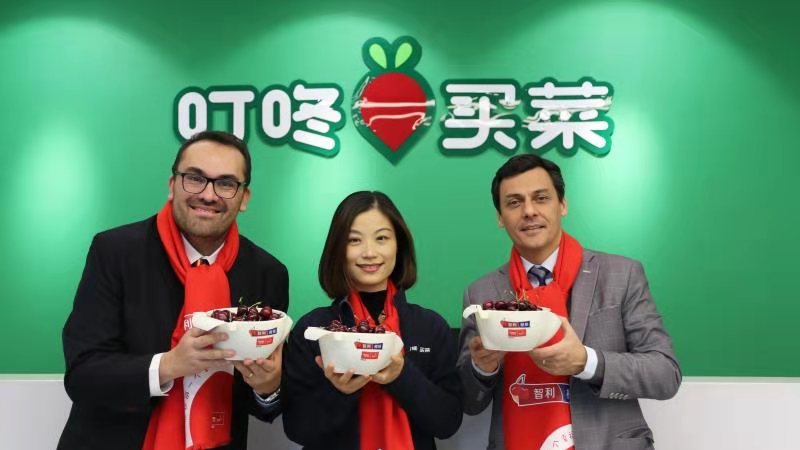 Dingdong Fresh is targeting major Chinese cities such as Ningbo, Suzhou and Wuxi, as well as a few provincial capitals, for future development.

Choosing the right cities depends on order volumes. The city-end supply chain will require construction of new warehouses, and if regional order volumes are low, then profit margins will suffer. As such, at this point it is necessary to start with major cities.

Additionally, Dingdong has taken into consideration the average age of consumers in its target cities. For example, in southern China, the company has decided to go with Shenzhen rather than Guangzhou owing to the former’s relatively young consumer population. 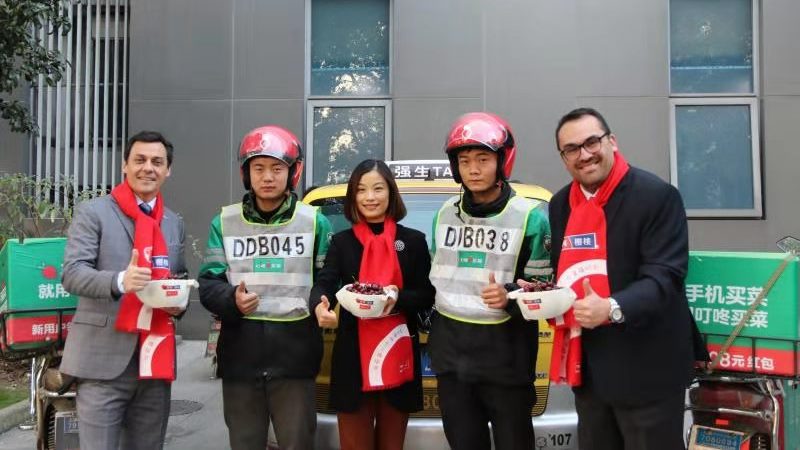 That is why Chile’s high-end fruits are expected to continue to thrive on the Chinese market. For example, 10 years ago in Shanghai, cherries were considered a luxury food, whereas nowadays they are more commonplace. In the next few years, the same process is expected to take place in smaller cities, and cherries will become much more accessible.

To achieve this “cherry accessibility”, it is necessary for companies like Dingdong Fresh and other industry leaders to pave the way by managing costs and allowing Chinese consumers to have access to more high-quality products.

The Chinese market is continuing to grow as it becomes more accepting of Chilean cherries, and as Chilean growers begin to see profits coming from China, they will be more willing to invest in the Chinese market to further increase these profits.

According to Carvajal, Chile’s cherry production is expected to double in the next five years, and the country’s cherry industry is very excited to work together with Dingdong Fresh to promote their products within China. Zhang affirmed that Dingdong is equally enthusiastic about this partnership and that he hopes that both groups will achieve a symbiotic and mutually beneficial relationship, allowing them to expand their collaborative efforts to develop even more trade between the two countries.

Dingdong Fresh was founded in May 2017 and is one of China’s leading and fastest-growing online grocery stores. The company aims to provide users with the ultimate online shopping experience for fresh products and is one of the benchmarking companies in China’s produce retail sector.

Dingdong’s services extend to such Yangtze and Pearl River Delta cities as Shanghai, Shenzhen, Hangzhou and Suzhou. The company currently manages almost six hundred warehouses and serves over 5 million homes, with daily order volumes of over 500,000. The company’s revenue reached 740 million yuan in 2018 and is expected to reach 6 billion yuan in 2019.