Chile and China Eastern Airlines Team up to Promote Cherries 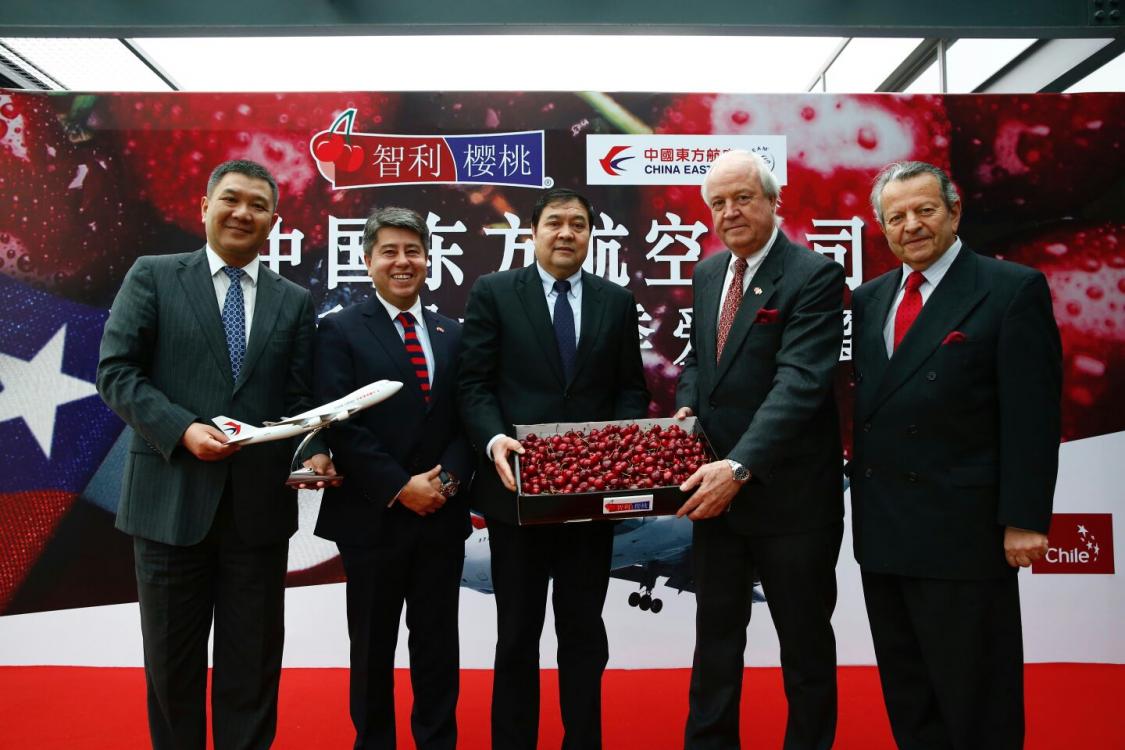 As part of the promotional activities undertaken in the Peoples Republic of China to actively promote the distribution and sales of cherries from Chile, the industry has recently undertaken a unique joint promotion with China Eastern Airlines in which cherries have been actively promoted amongst the passengers of one of the airlines most popular routes within China – the flight MU5119 from Shanghai to Beijing.

On the flight, passengers received a surprise winter love sweet in the form of a pack of Chilean cherries, including serving suggestions and a chance to purchase the product through the online platform www.yiguo.com via a QR code.

The launch of this promotional project took place at Shanghai Hongqiao Airport, this past 2nd of December and was jointly hosted by China Eastern Airlines, the Embassy of Chile in China, the Trade Commission Office - ProChile in Shanghai and the Chilean Cherry Committee of the Chilean Fruit Exporters Association (ASOEX).

According to Ronald Bown, Chairman of the Board of the Chilean Fruit Exporters Association (ASOEX), “This type of activity, undertaken by our Cherry Committee, is a unique experience that involves promoting our fruits on airline flights. Not only will we have our cherries in the flights cargo area – but also on the table tops of each and every passenger travelling on the flight MU5119 from Shanghai to Beijing. Through this activity we are actively promoting our cherries through a mix of distribution channels, including airline flights and facilitating their purchase through the online platform Yiguo.com.”

According to Jorge Heine, Ambassador of Chile in the People’s Republic of China; “There are more than 19,500 km between Chile and China but over the years we have managed to establish a long - term commercial cooperation in all productive sectors. Chile is the main supplier of cherries into China, but all of this would not be possible if we did not have an efficient and rapid maritime and airfreight transportation system between both our countries that cater to the rising demands of local Chinese consumers. We are pleased to support this type of activity that diversifies the distribution of one of Chiles main export items to China.”

Cesar Suarez, the Director of the Shanghai Trade Commission Office of Chile - ProChile, expressed that cherries are a very important fruit in China as they are produced at a time of the year when there are no cherries in the local market. Chilean cherries are available as early as October. However, most of the production occurs from the middle of November until the end of December - that means that that our cherries will arrive just in time for the “gift basket season” prior to Chinese New Year.

According to a passenger from Qingdao on the flight, “Chilean cherries were large, dark, firm, sweet and flavorful. I love Chilean cherries,!” he said

“Chilean cherries are in red color, almost heart shape, sweet in taste and available during all winter long, all of which that makes Cherries from Chile the best gift for family, friends and people you love! – that's the concept we are promoting amongst Chinese consumers through our campaigns, so that they can enjoy the moment with Chilean cherries as a great winter love sweet!” said Charif Christian Carvajal, Director of Marketing for Europe - Asia for the Chilean Fruit Exporters Association (ASOEX).

This promotional project forms part of the promotional campaign for Chilean cherries in China, which has the important support of the Chilean Ministry of Agriculture and the Chilean Export Promotional Bureau – ProChile.