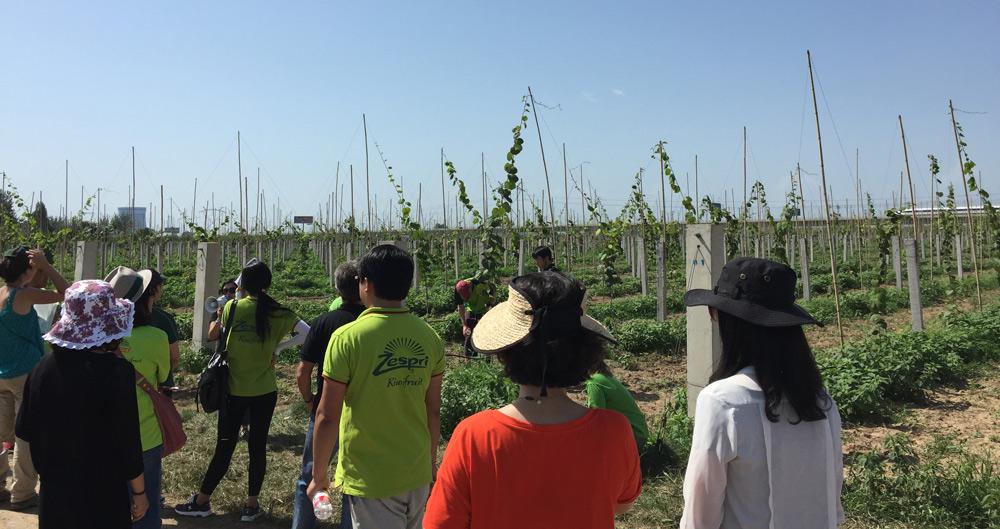 Zespri technical staff on a visit to one of the company's Shaanxi trial production sites. Source: Zespri

Following the signing in November of last year of an MOU between New Zealand’s national kiwifruit marketer Zespri and the Shaanxi Fruit Bureau, Produce Report has received an update from Zespri about its trial production in China’s Shaanxi province.

According to Sheila McCann-Morrison, Zespri General Manager Global Supply, trial orchards have already been planted at two partner companies with whom Zespri is working to, “identify key constraints to rapid and effective establishment of modern orchards.”

McCann-Morrison identified the partners as Heeh and Haisheng, “which have both committed to contribute 250 mu in Hanzhong and Wugong respectively.”

But this will apparently not be the case in China, where Mc-Morrison confirmed eventual kiwifruit production, if it occurs, will be used only to supply the Chinese market. “At this stage we are only using varieties found in China,” says McCann-Morrison of the trial plantings in Shaanxi. “There are a wide range of varieties in China and we are learning more their production and fruit characteristics.” According to media reports, a previous Zespri trial production in China resulted in one of its proprietary varietals being taken and produced by other growers without authorization.

Red-fleshed kiwifruit are popular among Chinese consumers and make up a significant proportion of domestic production. Zespri has previously trialed red-fleshed fruit, but ultimately decided not to bring them fully to market. In China, “Zespri is evaluating the fruit characteristics and sensory testing results of a range of Chinese varieties including reds,” says McCann-Morrison. But, “at present, no Zespri trial orchards involve red varieties.”

Green, gold or red, if Zespri does eventually start commercial production in China, it is expected take at least a few more years.

The following are highlights of a recent statement from McCann-Morrison regarding trial production in China:

On cooperation with Chinese partners:

“Zespri is also in discussion with various other Chinese research institutes to initiate collaborative research programmes in a number of areas. These include varietal assessment, Psa control, fruit quality improvement, and soil and nutrient management. In September 2016, a three-way MOU was signed between Zespri, Plant & Food Research and Shaanxi Rural Sci-Tech Centre which outlines our intent to undertake collaborative research programmes.”

On staffing and internal R&D:

“Zespri has employed five staff to support its production-related activities and another temporary staff member is running a project evaluating the performance of Chinese kiwifruit through the supply chain. Tony Tong has recently been hired as Supply Chain Manager to oversee Zespri’s trials in China and an office is being set up in Yangling Innovation Park, just out of Xi’an.

“Work is also underway to evaluate Chinese kiwifruit right through the postharvest supply chain and into the market, with sensory trial evaluations. A new position has also been created in Zespri’s R&D team to bring together Chinese and New Zealand expertise to evaluate vine and fruit characteristics of new varieties.”

Zespri technical staff on a visit to one of the company's Shaanxi trial production sites. Source: Zespri