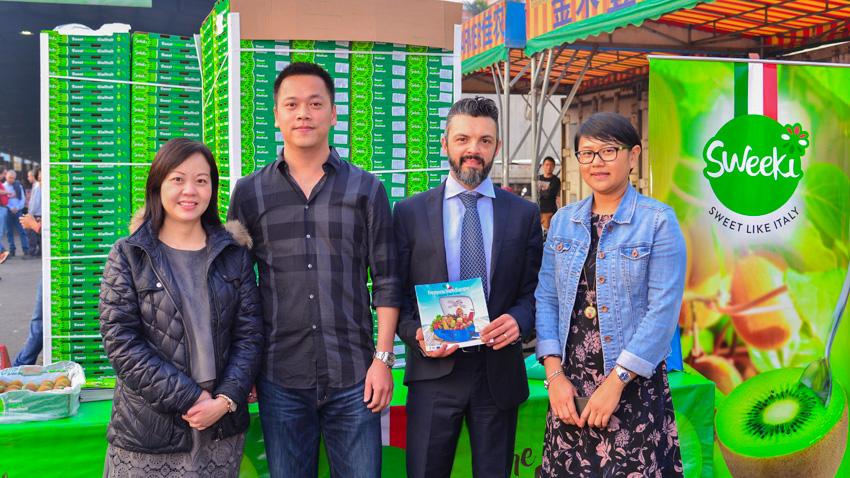 China is not only the native territory and largest global producer of kiwifruit—it is also home to some of the fruit’s most enthusiastic and discerning consumers. At the official China market launch event for Sweeki brand kiwifruit on the morning of January 6 at Guangzhou’s Jiangnan Wholesale Market, Origine Group of Italy displayed its ambition to take a piece of this market through positioning its high-end kiwifruit alongside other famous Italian products such as sports cars, luxury fashion goods and premium olive oil.

“Italy is known in the world not only for Ferrari sports cars, for Fashion—Gucci, Bulgari, Tods—or for football teams, but also for foods,” said Alessio Orlandi, general manger of Origine Group, a marketing consortium of nine major Italian fresh producers. “In the same land where we produce many of the best wines in the world, in the same land where we produce the famous olive oil, we also produce kiwifruit.”

Another speaker at the event, trade commissioner of the Italian Trade Agency in Guangzhou, Paolo Quattrocchi, also highlighted the theme of Italian products’ excellence. “As everybody knows well, ‘Made in Italy’ is a very famous brand in the world,” said Quattrocchi. “Just as food, wine, fashion and furniture, Italian kiwis are also one of our best products. We are the second biggest kiwi producer in the world and the biggest kiwi producer [and exporter] in Europe.” He also noted that Italy presently exports USD 470 million worth of kiwifruit annually.

Origine Group created the Sweeki Brand in 2015 with its eye on export markets, especially in the Middle East and Asia. To match consumer preferences in these areas, sweeter flavored varietals are being used (the brand name is a portmanteau of “sweet” and “kiwi”). According to Quattrocchi, China is the third largest market for Italian kiwifruit after Europe and the United States. Last week’s launch event is therefore an important step in the brand’s growth and reach.

The first container of Sweeki kiwis was imported by Global Andes and sold via the Jiangnan Wholesale Market, which is one of the most important distribution points for fresh fruit entering China. Ye Canjiang, general manger of the Jiangnan Wholesale Market spoke at the Sweeki event, saying that he was happy for Sweeki to have chosen the launch at Jiangnan due to Jiangnan Market’s strategic importance in transporting and selling imported fresh fruit in China. He added that he hoped to see more varieties of Sweeki kiwifruit coming through the market in the future and hopes the market can cooperate with other high-end European fruit producers to introduce their products to the China market.

More containers of Sweeki fruit are already on the way to Guangzhou and Shanghai and Origine is planning to start a retail promotional campaign in partnership with mainland supermarkets.

“I know that everyone here is an expert and key player in the Chinese fruit industry,” Orlandi told the assembled audience at the launch event. “I wish that Sweeki, through kiwi promotional activities like this one, and through your activities, will become in a short time a very familiar brand among Chinese consumers.”