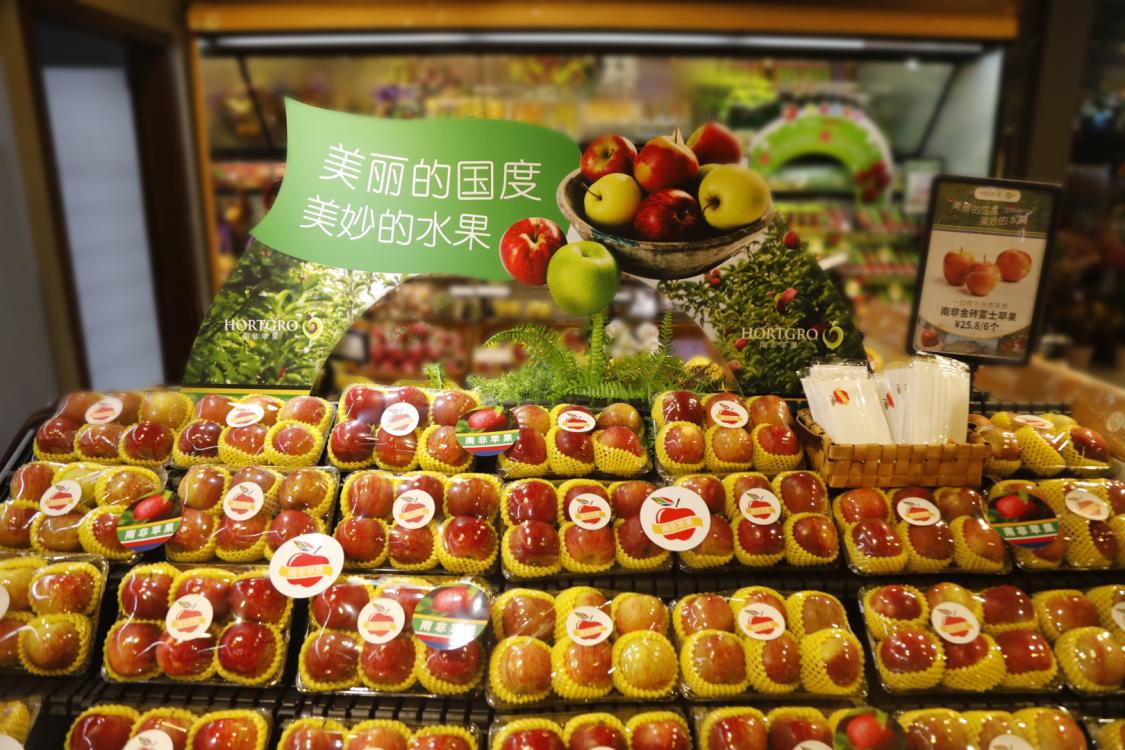 If current trends hold, 2021 is shaping up to be a record season for South Africa’s apple exports to China. The product has been bolstered by greater fruit industry demand in China for counter-seasonal apples, increasing apple output in South Africa, and growing consumer awareness of the product. On June 10, South Africa’s apple and pear industry association, Hortgro Pome, teamed up with Shanghai-based Fruit Day to stage a South Africa Apple Season Celebration Ceremony under the theme “Beautiful Country, Beautiful Fruit.” In addition to serving as the kickoff for Fruit Day’s 2021 season online and offline promotions for South African apples, the event also aimed to further stimulate consumer demand for South African apples by highlighting their unique growing environments, signature varieties and modern export-oriented industry.

Among the distinguished guests joining the ceremony were Mpho Anna Hlahla, consul general of South Africa in Shanghai; Siphokazi Hermans, political vice-consul at the South African Consulate in Shanghai; Jacques du Preez, general manager for trade and markets at Hortgro (joining virtually by video); and Jing Huang, head of supply chain for Fruit Day and City Shop. At the event, guests were treated to a tasting of delicious South African apples. Several journalists from Chinese media outlets also attended the event. 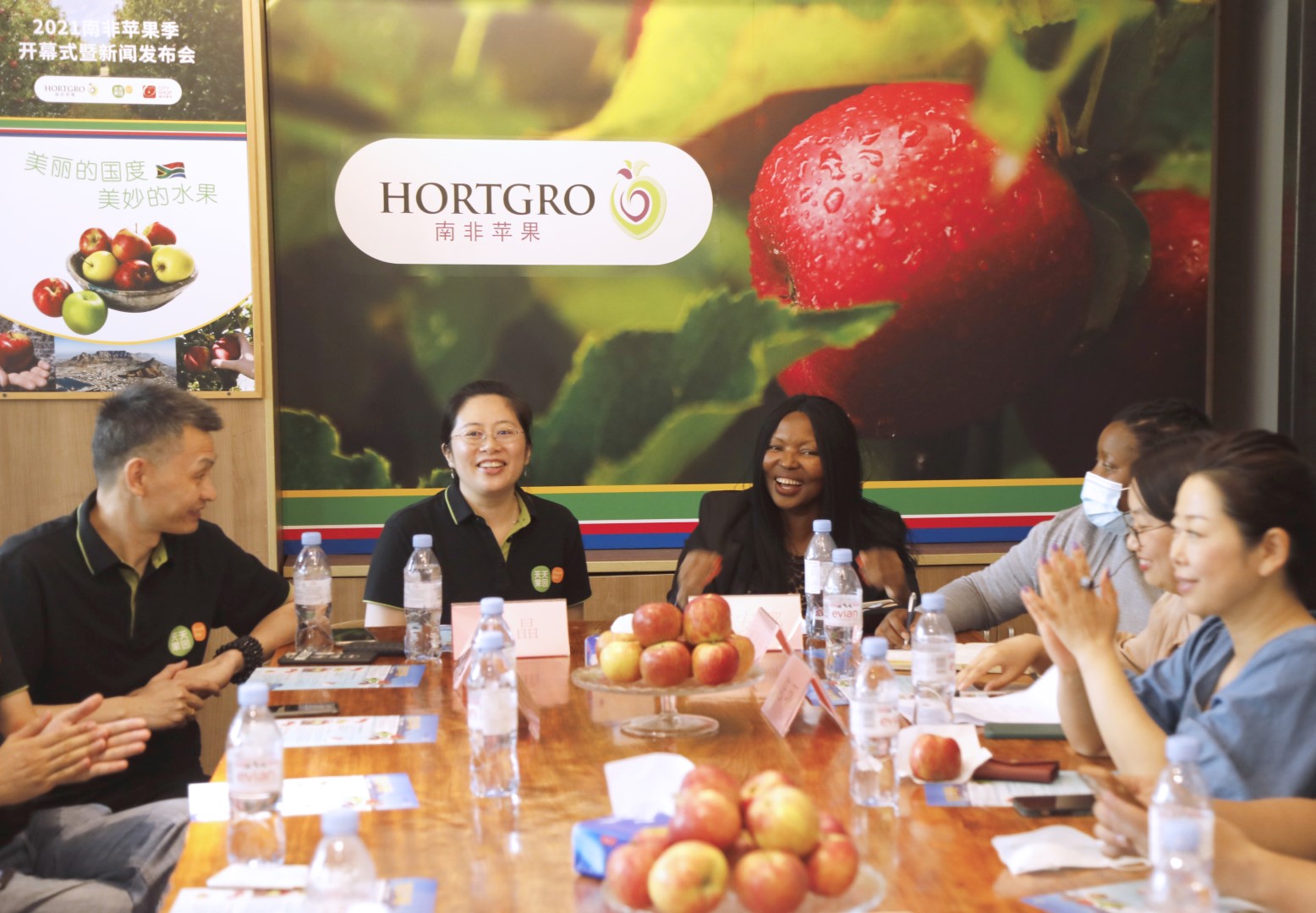 As production from recently planted South African orchards is coming online, the crop volume is also increasing. In China, importers, distributors and retailers are all looking forward to an ample apple supply and a wider range of available varieties from South Africa this season.

With South African apple exports to China in their peak period, the total export volume had reached 7,198 metric tons (575,838 12.5-kilogram carton equivalents) as of week 21 (through May 30). This is more than double the volume of 277,635 cartons exported by the same point last season. If this trend holds, 2021 will be a record season for South African apple exports to China.

“South African fresh fruit exports to China have shown positive signs in recent years,” said Consul General Hlahla. “Our apples in particular have made significant strides since gaining market access in China in 2015. China is now an important market for South African apples. Such results would not be possible without the sales and promotional support of retailers like City Shop and Fruit Day. With that said, there is still plenty of room to grow the volumes. Under the capable hands of Hortgro, the support of South African missions in China and the efforts of local partners such as City Shop and Fruit Day, the prospects for growth are real and massive.” 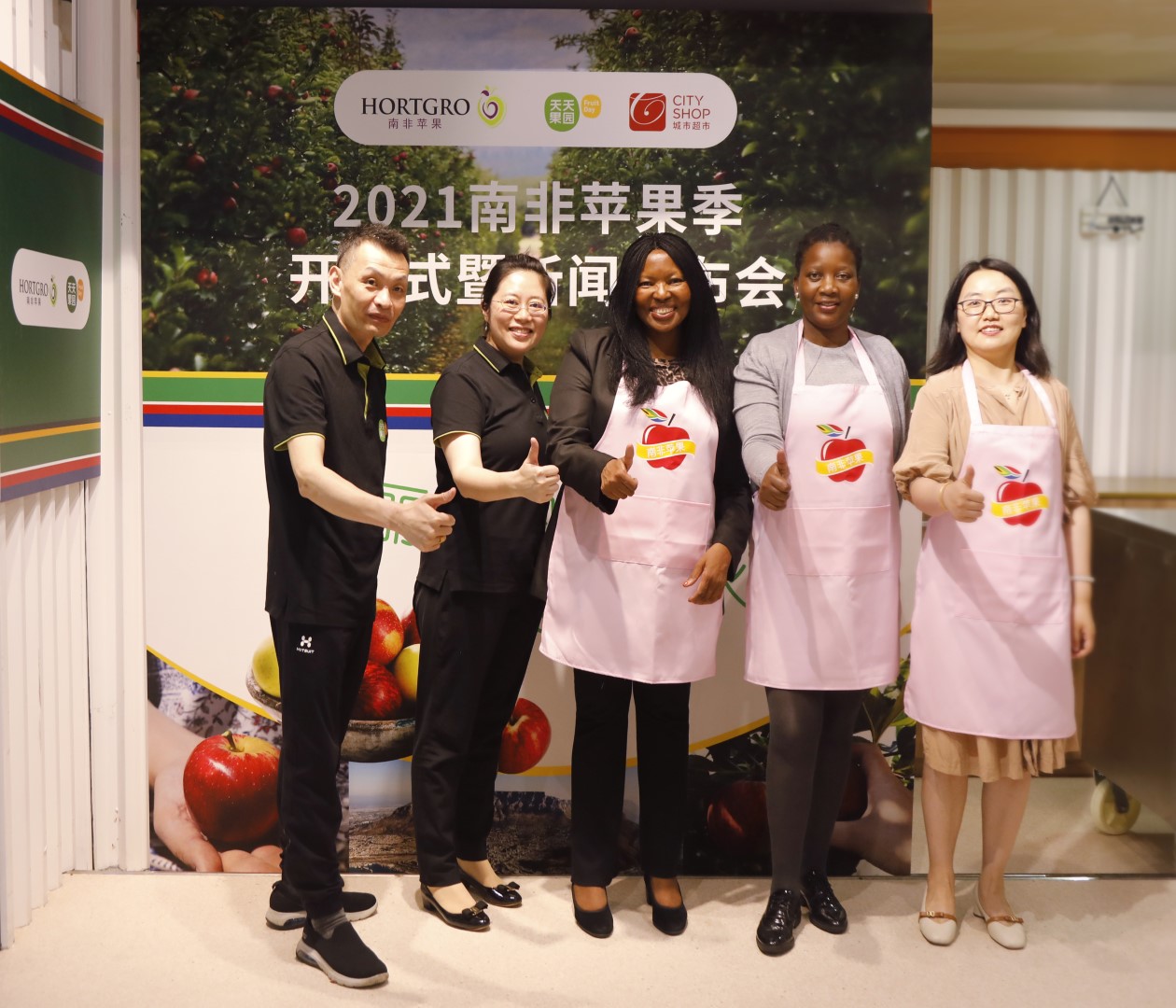 “We are very happy to partner with Fruit Day in this first year that we have launched an industry market development campaign in China,” said du Preez of Hortgro, which represents all of the 622 apple and pear producers in South Africa. “We have been overwhelmed by the positive interest and response from the Chinese fruit trade. We are excited to start and grow our relationship with Fruit Day and for Chinese consumers to discover and enjoy our great-tasting apples.”

In addition to acting as an e-commerce retail channel through its own app, Fruit Day also runs the high-end brick-and-mortar supermarket chain City Shop in Shanghai, which it acquired in 2017. It also sources apples directly from exporters in South Africa.