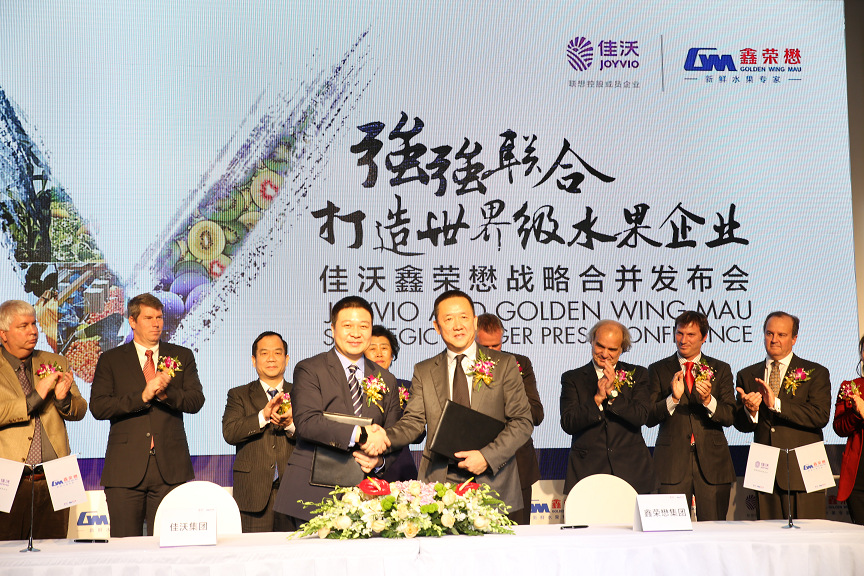 “As we’ve pursued agriculture all these years, we’ve accomplished a great deal and furthered our goal of using new thinking to transform how agriculture is done in China,” says Chen Shaopeng, President of Joyvio, which jointly announced with Golden Wing Mau on December 16 that two of the major forces in China’s fresh fruit business would merge to create China’s largest fruit company. “The process of working in agriculture is arduous but fulfilling: you have to grit your teeth and put in a lot of work. It’s not enough to have great ideas and brim with passion. It’s also necessary to work diligently day after day, year after year. Only by sowing the seeds of care can one reap safe and healthy food for the consumer.”

The merger will join two companies with markedly different backgrounds and strengths that have nevertheless come to have many overlapping operations. While the Golden Wing Mau fruit empire grew organically from a small local distribution business, Joyvio’s heritage is firmly rooted in the world of modern investment. It was set up in 2012 as a food-focused subsidiary of Legend Holdings, a Chinese investment company that is the parent company of Lenovo computer and holds a wide-range of investment interests.

The company was quick to see promise in fresh fruits, which was a particularly free and open space. “We looked at the industry and realized there was an opportunity to grow alongside the consumer base in China while filling holes in the market and creating a strong brand,” Chen told Produce Report in an exclusive interview conducted in Chinese on December 17 following the merger announcement.

Among many fruits, Joyvio chose to start by focusing on blueberries and kiwifruit. Already a popular “superfood” in Western markets, Chinese demand was just starting to flourish. The company saw that return on investment was high on blueberry cultivation, and that it depended on the sort of technical expertise and industrial scale that Joyvio could use its investment backing to supply. Kiwifruit originated in China prior to being popularized internationally by New Zealand growers, and China boasted untapped resources in kiwifruit varietals and production areas. Joyvio would follow through on its focus to become China’s largest domestic end-to-end blueberry producer and largest cultivator of kiwifruit.

Recently, Joyvio has set its sights on the market for bananas, hoping to become a dominant player in a fruit that has mass appeal and is one of China’s top fruit imports—and also to move a step forward its vision of being a top supplier of a comprehensive catalogue of fresh fruits. Joyvio and Golden Wing Mau have indicated that after the merger the new entity will continue to focus on expanding its presence in many other types of fruit in which Golden Wing Mau already has a foothold, including cantaloupes, navel oranges and apples.

In addition to contributing to the modernization of agriculture inside of China, Joyvio has also established an impressive global supply network. It started by acquiring five production bases in Chile and forging a partnership with leading Australian produce company Perfection Fresh. It then expanded its investment and partnerships across Brazil, Argentina, Mexico, California, British Columbia and New Zealand.

Despite China’s widespread fruit cultivation and a range of growing regions ideally suited to various kinds of fruit, the nation’s fruit industry still tends to exist on a small-scale and scattered basis. Much fruit is purchased by small buyers directly from farming families and flows through non-integrated supply chains. To illustrate the inefficiencies of this model in the modern economy, Joyvio takes the example of blueberries. Joyvio discovered that its Chilean partner Subsole suffered blueberry loss rates of only 3 to 5 percent; in China loss rates can reach up to 60 percent. Joyvio was able to seize the opportunity to implement a more modern production model and bring advances in varietals and infrastructure. It was finally able to reduce loss rates for berries from its own operations down from the mid teens to the 3 to 8 percent range.

“China’s fruit industry needs greater investment power—a greater driving force that can bring about faster advances to keep up with the rate of development in the rest of the world,” says Chen. Joyvio’s own contributions to this effort over the past four years have been impressive. The company has combined the best ideas and technology from inside and outside of China to make the improvements to breeding, facilities, plant protection, management and testing that are required for modern agriculture. Its accumulated knowledge has spread through domestic partners and contributed to the overall development of the agricultural industry of China.

During this period of rapid development Joyvio regularly communicated and collaborated with Golden Wing Mau. Though not as strong in production technology, Golden Wing Mau has spawned 20 units focused on a diversity of areas including warehousing, cold chain, import/export, retail and production. It’s greatest strength lies in its expansive distribution network and sales channels. “I first got aquatinted with [Golden Wing Mau President] Liu Mau Wah soon after Joyvio was established,” says Chen. “We’ve frequently exchanged ideas and learned from each other since. We regularly get together to delve into the state of the industry and enterprises therein. I consider him a good friend. My team and I both greatly admire Mr. Liu. He has global vision and an international leadership style.”

The new company, the Chinese name of which will translate as “Joyvio Golden Wing Mau” will have revenue exceeding 5 billion yuan (US$780 million) and Chen and Liu will become its co-chairmen. “The goal of the merger is to grow and solidify our competitive position,” says Chen. “When the time is right we will also consider making an IPO.”

In the short term, Produce Report has come to understand that Joyvio Golden Wing Mau will focus on constructing more cold chain facilities, building out sales channels, enhancing food safety controls and strengthening international cooperation to upgrade domestic fruit production. In the long term, the new company hopes to create an internationally integrated ecosystem with transparent supply chains that will use the best technology, production regions and brands to deliver the finest possible fruit to consumers in China.

One might speculate that there is another possible reason for the merger which was omitted in the official press announcement: that joining together will allow the two companies to better address the existential threat posed to the traditional fruit distribution model by Chinese e-commerce giants such as Alibaba Group and Jingdong Mall. Electronic retailing of fruit has seen high rates of consumer adoption and sales growth recently, especially at the high end of the market. In response to the question of whether this had been a motivating factor in the merger, Chen said. “The new group will certainly lay equal stress on our core fruit business and ecommerce as we build ourselves into a globally influential fruit company. But in the actual way our business is composed and the scope of our services we are not planning to be a direct competitor to the major ecommerce platforms—so we don’t see this as the beginning of some sort of conflict.”