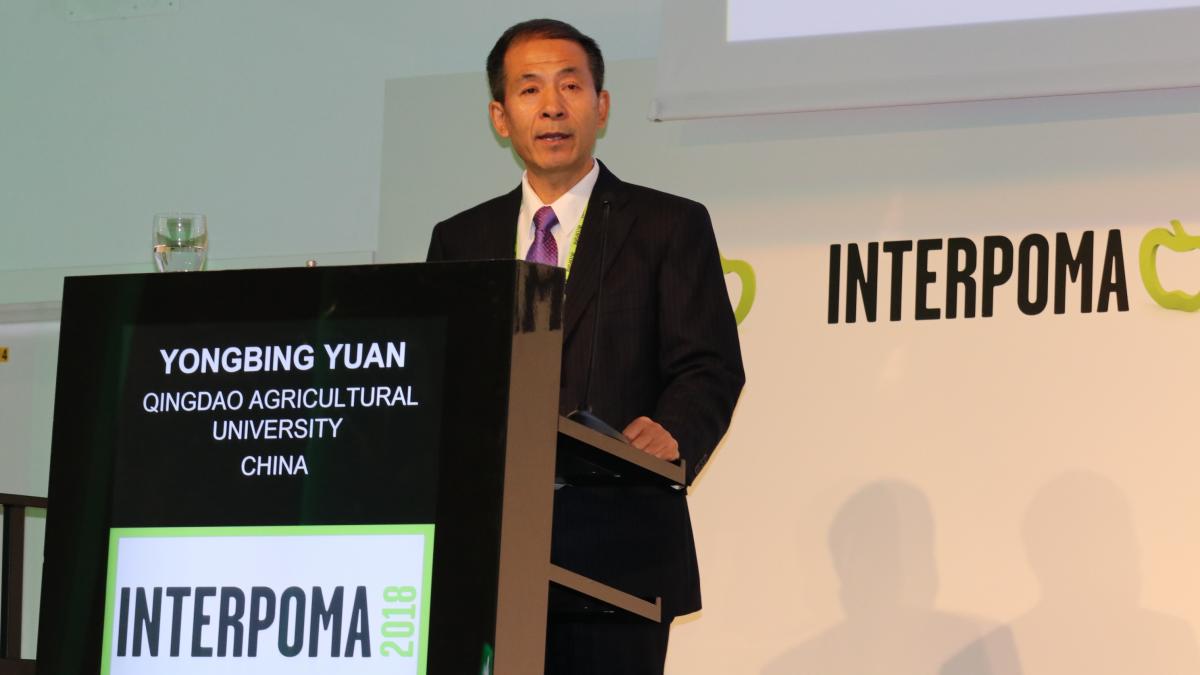 Last year’s Interpoma, the world’s only trade fair devoted exclusively to apples, which was held on November 15–17 in Bolzano in Italy, attracted 20,000 visitors from over 70 countries. Over the first two days, more than 20 international speakers gave talks on numerous topics of importance to the modern apple industry.

On the first morning, Prof. Yongbing Yuan of Qingdao Agricultural University delivered a lecture entitled “China: Competitor or Chance on the International Apple Market”, in which he discussed China’s apple sector, the benefits it brings to China, and the opportunities that the Chinese market offers businesses in the apple sectors of other countries.

Despite a lower-than-expected crop in 2018 owing to poor early-season weather, China remains by far the biggest apple producing country in the world. Moreover, apples remain by far the main fruit grown in China, with production centered on the Loess Plateau and surrounding areas, especially the provinces of Shaanxi (10.9 million tons in 2017), Shandong (9.4 million tons), and Shanxi (4.5 million tons). Fuji is the #1 apple variety grown in China, comprising 69.9% of production, followed by smaller amounts of Delicious (9.2%), Qinguan (6.8%), Gala (6.3%), Ralls (2.4%), Huaguan (2.1%), and Golden Delicious (1.2%).

In 2017, approximately 44.5 million tons of apples, over half of the total global crop, were grown in China. The vast majority (>97%) of these were consumed domestically, with only 2–3% being exported. In fact, apples account for approximately 25% of the fruit consumed in China, making them more popular with Chinese consumers than even citrus fruits (21%). Notwithstanding the expected 30% decrease in 2018 due to late frosts in April, apple production has been steadily increasing since around 2005, in terms of both total volume and orchard area. However, increases in profit have lagged somewhat behind the increases in gross income owing to increasing labor costs associated with thinning, bagging, bag removal, pruning, and picking. Lower prices on the domestic market in 2016–17 due to overproduction caused the export volumes to increase slightly. 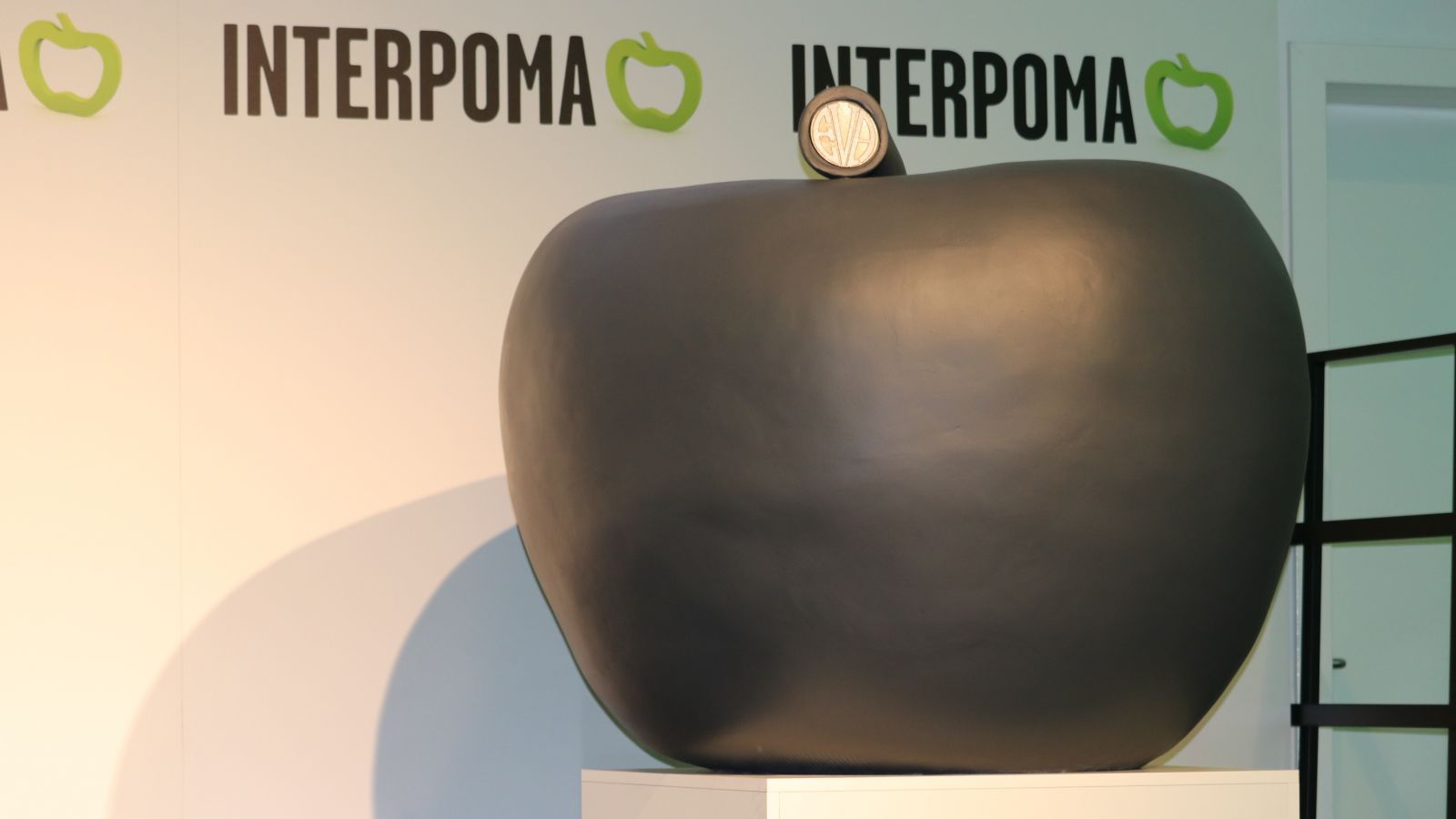 Many rural areas in China have benefited from apple growing as a means to reduce poverty. One particular example given by Prof. Yuan was the establishment of the Yantai Geruite Fruit Cooperative in Dongyuantou Village in Shandong Province, where 180 families with small orchards joined forces to modernize their orchards and introduce improved technologies and management techniques. Another was Luoyang Village in Shaanxi Province, which now has a reputation for producing sweet and tasty apples with a good texture.

Apples are also widely considered to be beneficial for health owing to their high antioxidant levels, as suggested by the proverb “an apple a day keeps the doctor away”, and certain polyphenols present in apples have been scientifically demonstrated to exert anticancer effects. As Prof. Yuan noted, taking this proverb literally would require 543 million tons of apples per year for the global population, several times higher than current production. In this sense, owing to its huge apple production, China could become a major competitor on the world market if its apple distribution were to turn outward.

Nonetheless, this does come with opportunities. According to Prof. Yuan, China’s apple industry has been changing over recent years as growers have been learning and applying new techniques from Europe. This has included new fertilization technologies as well as biological and physical, rather than chemical, strategies for pest and disease control. New and proprietary varieties are also becoming easier to protect in China, and the first case of intellectual property transfer in China’s apple industry occurred in 2017 with the “Fuli” apple variety, a cross between Telamon and Fuji bred by Qingdao Agricultural University and transferred to the Natural Farming Company at a cost of 1.56 million yuan. Two additional crosses of Fuji and Qinguan with good storability and high Brix levels, “Ruiyang” and “Ruixue”, have also recently been established in Shaanxi Province.

These recent developments have created a demand for international apple specialists to help modernize China’s apple industry. Another opportunity is expanding the market for processed apple products such as apple chips and not-from-concentrate juices, which still account for less than 20% of China’s apple crop.

In terms of future prospects, Prof. Yuan highlighted the need to improve production yields and efficiency, such as by optimizing the cultivar constitution, transferring seedling rootstocks to dwarf rootstocks, decreasing production costs, and increasing apple quality, and it remains to be seen whether China will become a competitor or a chance – or both – for the international apple industry.