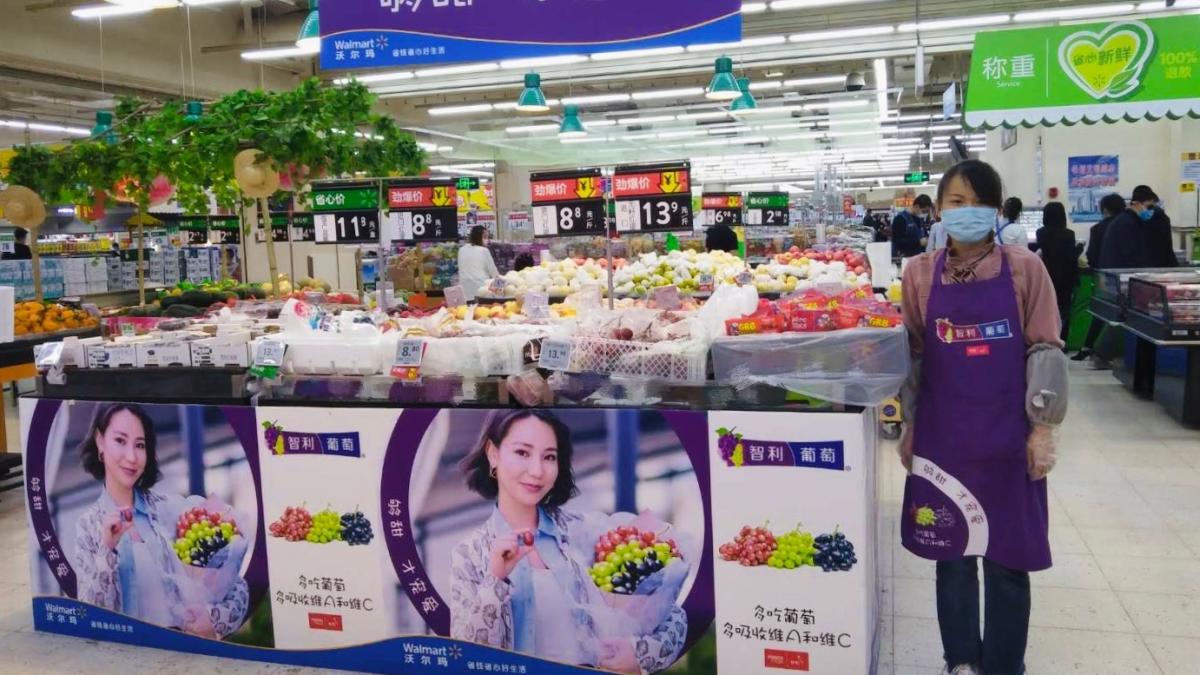 Despite challenging market and crop circumstances, the Chilean Fruit Exporters Association (ASOEX) has successfully completed its 2019/20 season table grape promotional campaign in China. A modest rise in exports of Chilean table grapes to China this season was led by an increase in seedless and specialty varieties. 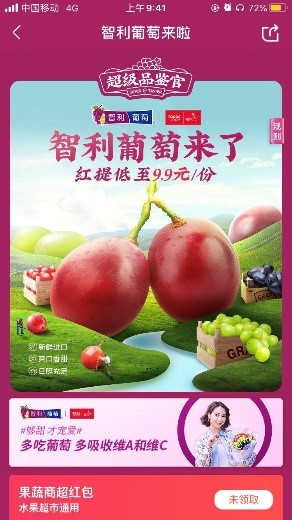 The April promotional campaign was staged by the Chilean Table Grape Committee of ASOEX and targeted both consumers and traders, spanning a variety of channels. It included social media posts by foodie key opinion leaders, cooperation with the Ele.me food delivery platform, in-store sessions at leading retail chains and a digital advertising campaign.

“Consumers are more concerned about their overall wellness, especially as it relates to their immune function,” said Charif Carvajal, ASOEX’s marketing director for Europe and Asia. “Nutrition is one component of wellness. Therefore, we wanted to use this campaign to remind consumers that Chilean grapes are a great substitute for processed or sugary sweets and that they contain essential nutrients like fiber, vitamin A and vitamin C. On top of these benefits, table grapes from Chile are an affordable everyday choice.”

The online campaign with Ele.me used banner ads and discount offers to encourage consumers to order Chilean table grapes from brick-and-mortar retailers to be delivered to their home by Ele.me drivers. Featuring integration with China’s three main chain fruit retailers – Pagoda, 30+ and Xianfeng – as well as over 100 other fruit retail brands, the campaign included participation from more than 6,000 individual stores. 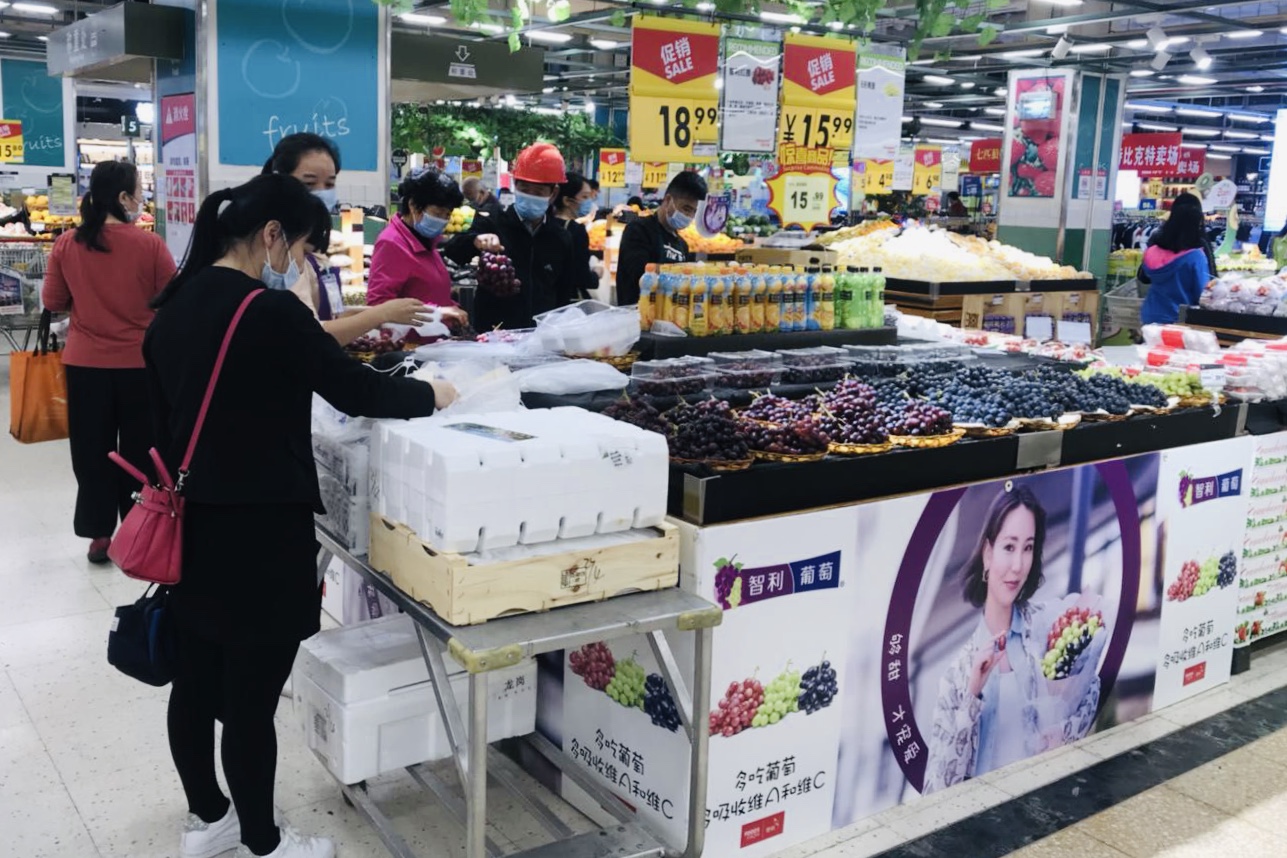 Overall, the 2019/20 Chilean grape season was not without challenges up and down the supply chain. Chilean table grape growers, faced with unseasonable high temperatures in many regions during the early part of the season, had to scramble to protect their fruit. Amidst the effects of the COVID-19 epidemic, traders in China struggled with weak prices and fluctuating arrival volumes.

Perhaps another contributing factor to weak prices was that in a season when Chile’s overall table grape output and exports dropped, exports to China rose by a modest 2.9%.

A deeper look at Chile’s table grape export volumes to China reveals that amidst this slight uptick in exports, there was also a significant realignment in the volumes of various varieties being sent to China. Exports of Red Globe grapes from Chile to China for the 2019/20 season fell to 61,650 tons, 13.4% less than the 2018/19 season and a 25.2% drop compared to 2017/18. In contrast, exports of Crimson Seedless from Chile to China rose this season by 69.8% to 22,465 tons.

Meanwhile, although the volumes are still comparatively low compared to traditional varieties, exports from Chile to China of a wide range of club and specialty table grape varieties have risen dramatically in percentage terms over the past few seasons.

“In addition to traditional varieties, Chinese consumers’ awareness and fondness regarding specialty varieties is gradually improving,” said a representative of Chinese specialist fruit retailer Pagoda. “With our partners from Chile, Pagoda began selling Muscat Beauty this season. Based on the feedback from our stores, the variety’s appearance and flavor have been well received by many consumers.”

Distributor/retailer Greenery Fruit pointed out the Sable/Sugrasixteen variety as another table grape that has been performing well in the China market. Meanwhile, Gonzalo Matamala, general manager of Fruit Color (Chile) Import and Export Co. Ltd. in Shanghai – a subsidiary of Chilean fruit exporter Gesex – stated that he saw potential in a few green seedless varieties such as Sweet Globe and Autumn Crisp, as well as black seedless varieties like Sable/Sugrasixteen and Sweet Favors.

However, despite some new varieties starting to pick up steam in the China market, the industry in Chile should not be complacent, warned Nicolas Troncoso Cruz of the marketing division of Chilean table grape exporter David del Curto. “It is important to be working on new genetics permanently,” says Cruz. “As new varieties are discovered or innovated, they improve with respect to the old ones. And in the good old ones that the market appreciates, via technical innovation, they can also be improved.”