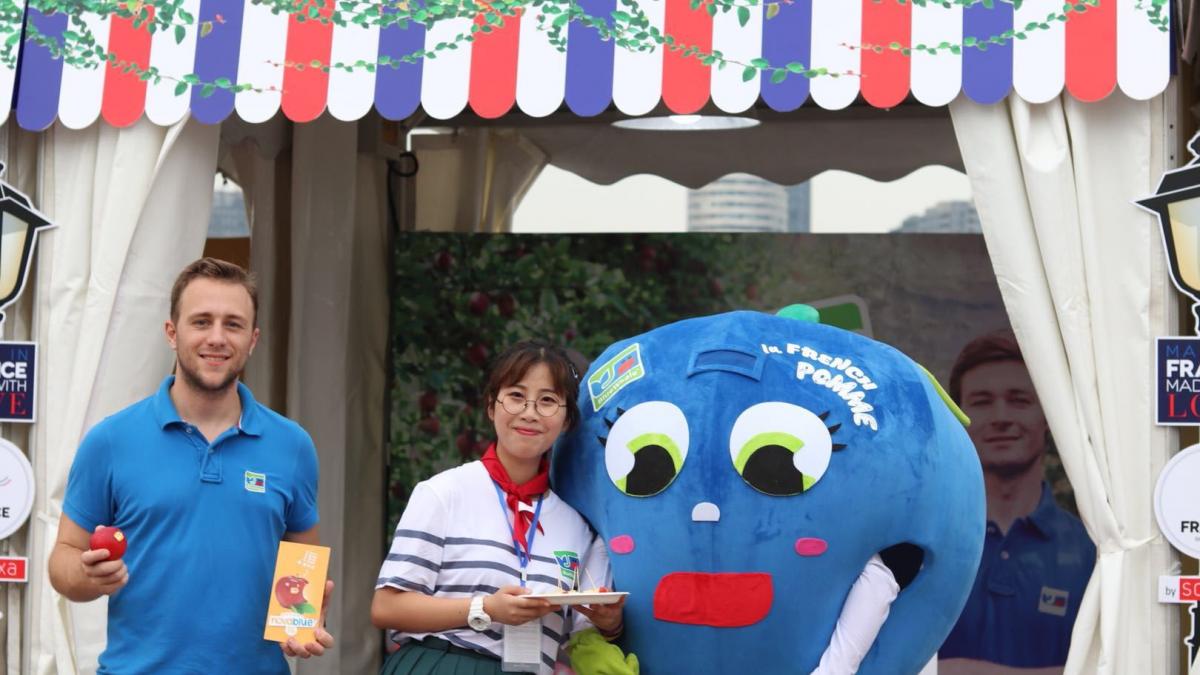 At the recent Wine & Dine Festival held in Shanghai on September 14–16, Produce Report had the opportunity to interview Adrien Touzet, Trade Marketing Executive of the leading French apple exporter Blue Whale, regarding the company’s new apple varieties and ambitions for the Chinese market. The event was organized by Shanghai Morning Post with support from Pudong New District Government and the EXPO group, bringing quality food, wine, and culture from around the world to create a carnival-like atmosphere for Chinese consumers.

France is Europe’s third largest producer of apples after Poland and Italy, harvesting 1.62 million tons of the fruit each year. Apples account for 58% of France’s total fruit production and 71% of its fruit exports, making them a crucial part of the French produce sector.

Blue Whale was founded in 1959, when a handful of fruit growers in the Garonne Valley region of southwest France joined together to optimize the production and commercialization of their produce, with the ultimate goal of having their fruit available to be enjoyed worldwide. This is depicted in the company’s logo, where the chubby whale represents a boat laden with fruits and the blue represents the color of the horizon. Blue Whale has since expanded to approximately 300 fruit growers and 11 cooperatives throughout France, with 5,500 hectares of orchards spanning a variety of growing regions and climates. While apples account for 90% of the company’s total production, it also grows smaller amounts of grapes, kiwifruit, pears, and plums. According to Mr. Touzet, “The main thing we want our customers to link Blue Whale products with is quality and safety. This is our ultimate goal. Because France has one of the most strict regulations in terms of fresh products, we want [consumers] to know that when they buy French products, Blue Whale apples specifically, they will always get the best products – the best quality and the safest products.”

Blue Whale’s farmers currently grow 19 varieties of apples. While these include numerous traditional and club varieties, such as Braeburn, Golden Delicious, Granny Smith, Pink Lady, and Royal Gala, Mr. Touzet explained that the company’s main focus is on developing their own varieties to maintain full control over distribution and marketing activities. This is especially the case for markets in Asia and the Middle East, whose consumers are often more curious about new varieties than their counterparts in the more traditionally oriented European markets, who tend to prefer varieties with recognizable names.

One of the most recent new varieties is Novablue, a premium Gala clone developed in the orchards of the Vergers d’Anjou cooperative in northwest France, which possesses a homogeneous and intense bright red color, a crunchy and juicy texture with a soft taste, and a prolonged shelf life. The high >90% coloration of Novablue apples, compared with other Gala apples that may exhibit 60–70% coloration, allows them to be harvested at the ideal time for optimum sweetness and flavor. Novablue apples are harvested in mid-August and available in Asia from late September to March.

Another new variety destined for introduction later this year is Candine, a red apple with a very attractive round appearance, a regular shape, and a firm and sweet flesh. The company is also engaged in developing organic varieties and varieties that can be harvested earlier in the season, and has already seen success over the last several years with its Fuji Primeur variety, which can be harvested from the beginning of August and therefore arrive on the Spanish market ahead of its competitors.

France has a long history of apple production, and Mr. Touzet explained that Blue Whale’s key advantages include its extensive knowhow and continued investment in novel growing, sorting, and packing technologies: “From orchard to market stall, Blue Whale has chosen the path of quality rather than volume at any price. Our fruit growers love their job and combine their expertise with respect for the natural cycle in their quest for the ideal fruit.” These technologies include continuous monitoring of the orchards, insect-proof nets, phytosanitary management, biotechnological approaches to pest control, and a strong focus on sustainable production and respect for the environment in terms of water and chemical usage. Mr. Touzet also stressed the importance of state-of-the-art packing and storage facilities that are able to adapt to the demands of each client and market, such as the preference for unwaxed fruit on the Chinese market, and performing extensive testing of each batch for sugar levels, juiciness, and crunchiness.

China is expected to be a very exciting market for Blue Whale’s apples this year. As Mr. Touzet explained, Chinese apple production is predicted to be significantly below average this season owing to frosts earlier in the year, while the ongoing trade war with the US has led to higher tariffs on US apples entering China. Both of these elements favor the export of French apples to China, although Mr. Touzet stressed the company’s desire to establish long-term relationships with Chinese importers and consumers rather than focusing on short-term profits. This strategy will involve adapting to the specific requirements of markets in China and around Asia and following the trends in each market to optimize sales. In the case of China, the marketing campaign will include in-store, social media, and e-commerce promotional activities, especially in the period leading up to Chinese New Year.