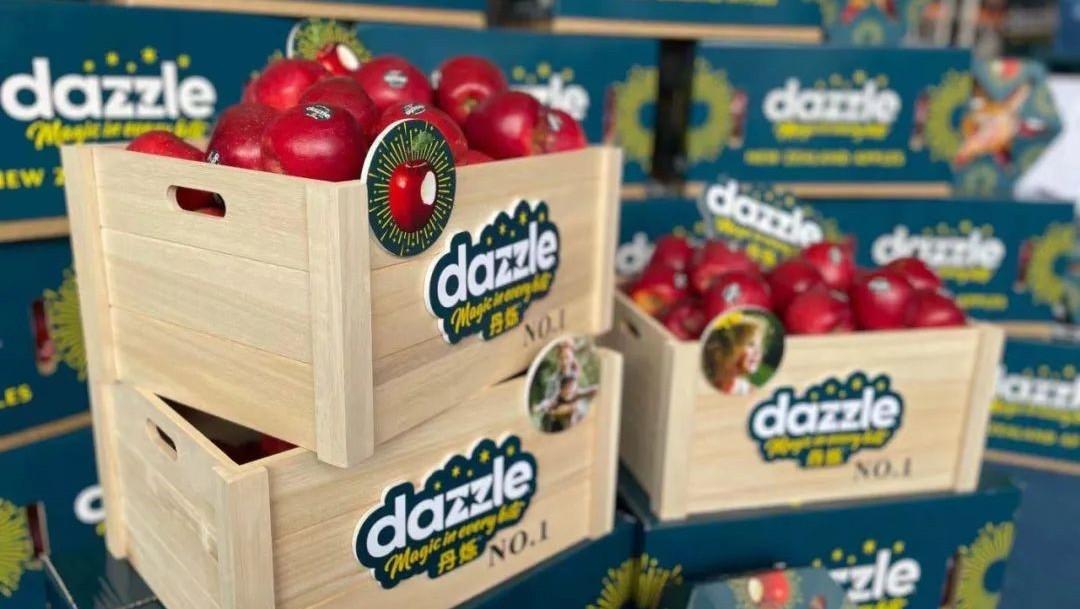 Pete Frost and Richard Dunsheath, trade commissioners at New Zealand Trade and Enterprise, were invited to deliver speeches onstage. They stated that Dazzle apples are the result of a two-decade-long breeding program by the New Zealand Institute for Plant and Food Research. This new variety, developed specifically for Asian consumers, features an array of appealing attributes, such as a bright red color, medium to large fruit size, crunchy and juicy flesh, good storability and a long shelf life.

The supply season for Dazzle apples begins in April and lasts until September, a period when China’s domestically grown apples are in their off-season. Within about three weeks after harvesting, the apples are able to hit the shelves in Chinese supermarkets. Dazzle apples are entering full production for the first time this year, meaning that the volume available for export is expected to witness a substantial increase. Furthermore, the Dazzle trademark has already been registered throughout China, such that each bite can be guaranteed as the pure taste of New Zealand.

With respect to the distribution channels and packaging strategy for Dazzle apples in China, Chen Qicai and Li Lin from Joy Wing Mau Group informed Produce Report that these high-end apples were scheduled to reach both offline channels, such as the Jiangnan and Huizhan markets, Sam’s Club stores, Ole’ outlets and HEMA Fresh supermarkets, and online channels, including JD, Tmall and Douyin. Meanwhile, Joy Wing Mau Group, the distributor for Dazzle apples in China, has also designed a variety of packing specifications tailored to different purchasing channels.

Produce Report also spoke to Frost and Dunsheath, both of whom exuded an air of optimism as to the market prospects for Dazzle apples in China. According to them, New Zealand has accumulated extensive experience in apple cultivation. Each year, a strong volume of apples from New Zealand is exported to China, causing the unique preferences of Chinese consumers to become greatly valued in the country’s varietal innovation programs.

New Zealand is a land full of marvelous natural wonders, such as fresh air, clean water, abundant sunshine and fertile soil, with a climate that is warm and dry in the summer and cool in the winter. All of these factors provide ideal conditions for growing apples. At present, seven New Zealand companies, namely, Mr Apple, Bostock, Freshmax, Pickmee, RD8, Taylor and Golden Bay, have gained the rights to grow and export the variety.