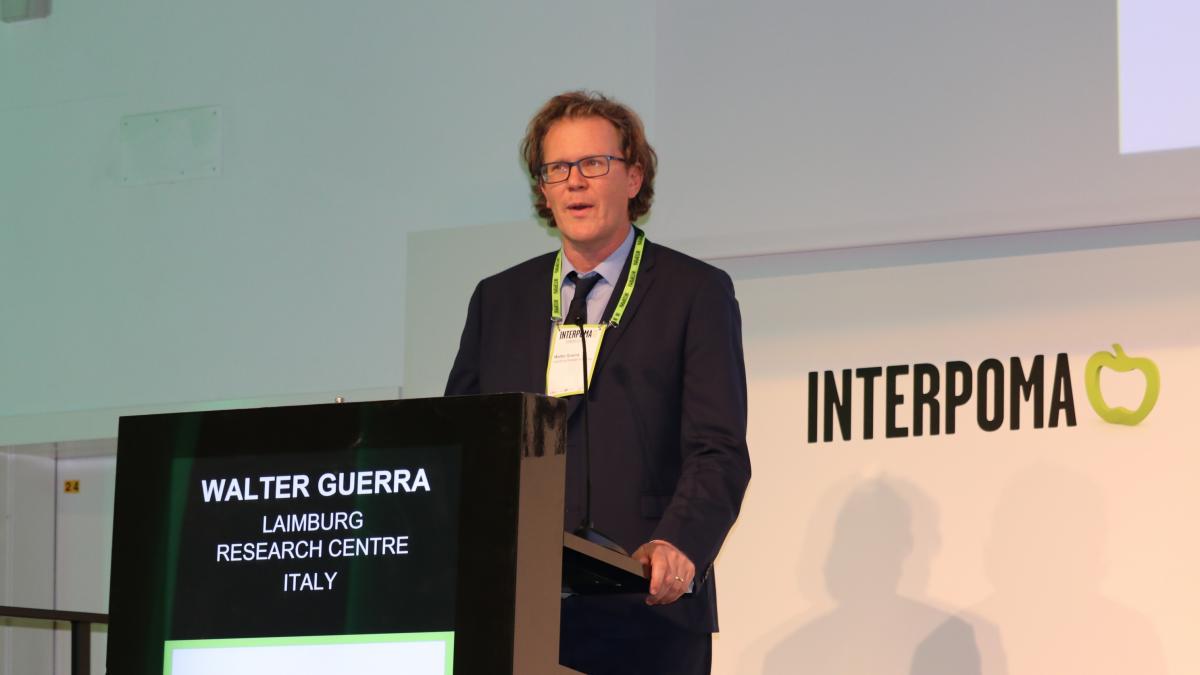 Last month saw the successful 11th edition of Interpoma, the world’s only trade fair devoted to apples, which was held on November 15–17 in Bolzano in Italy. This year’s event attracted 20,000 visitors from over 70 countries and 789 exhibitors, and during the first two days over 20 prominent international speakers delivered presentations on a variety of topics relevant to the modern apple industry.

On the first afternoon, Dr. Walter Guerra, Head of the Institute for Fruit Growing and Viticulture at the Laimburg Research Centre, gave a lecture entitled “Today’s New Varieties: Global Trends in Variety Innovation”, in which he discussed recent trends in apple varieties around the world. The Laimburg Research Centre engages in applied research to provide innovative solutions for the local fruit industry and agriculture in general, and for the last 15 years Dr. Guerra has been leading its Pomology working group. 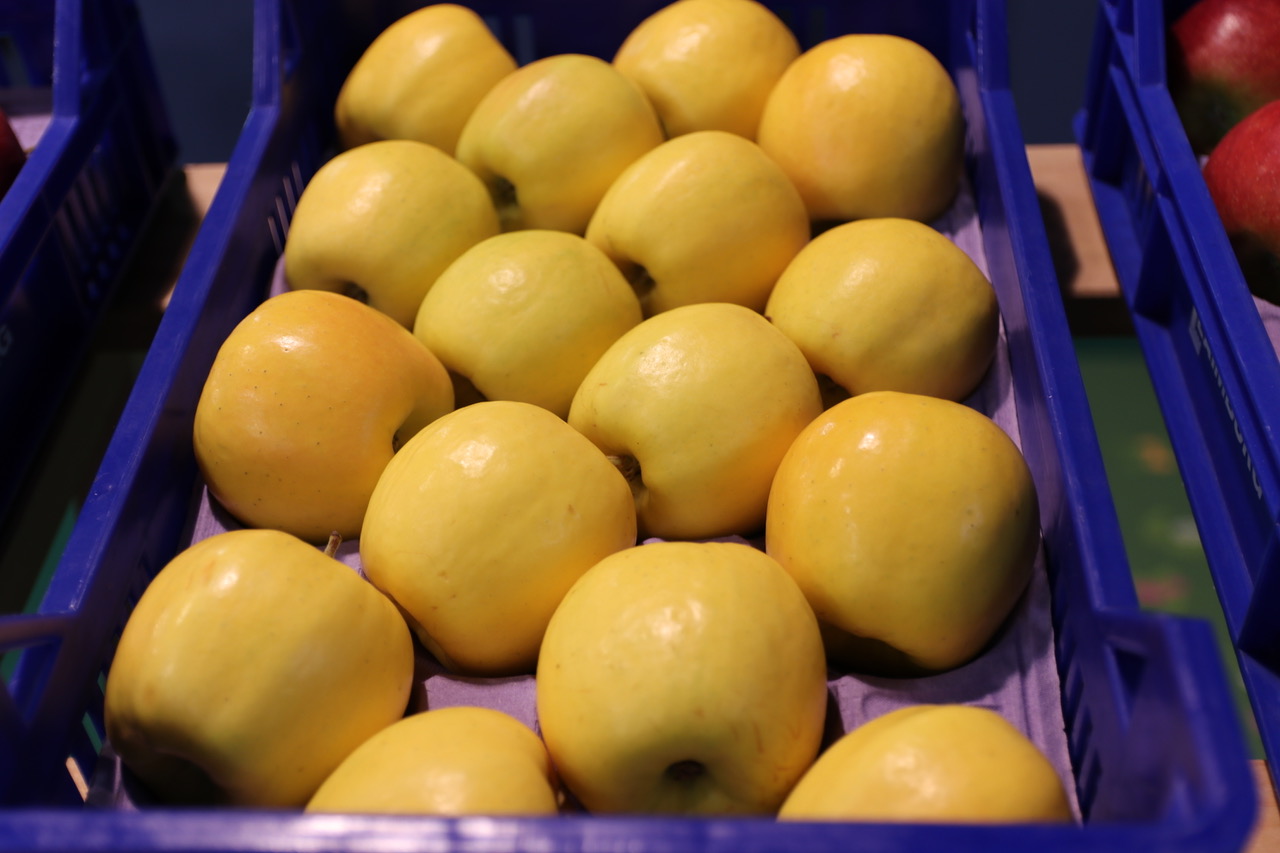 A growing number of club varieties have also emerged over recent years. Based on the available data, which are in some cases limited owing to confidentiality, the most planted club variety at present is Pink Lady®, a trademarked name under which apples from the Cripps Pink, Rosy Glow, and Sekzie varieties can be sold, of which >5,000 ha have been planted. Other prominent club varieties include Kanzi® (Nicoter, 3,000–4,999 ha), Cosmic Crisp® (WA38, 1,000–2,999 ha), Jazz® (Scifresh, 1,000–2,999 ha), Ambrosia® (1,000–2,999 ha), and Joya® (Cripps Red, 1,000–2,999 ha). Nonetheless, these club varieties still play a relatively minor role in terms of overall area, covering only an estimated 35,000–50,000 ha of the millions of hectares of apple production worldwide. 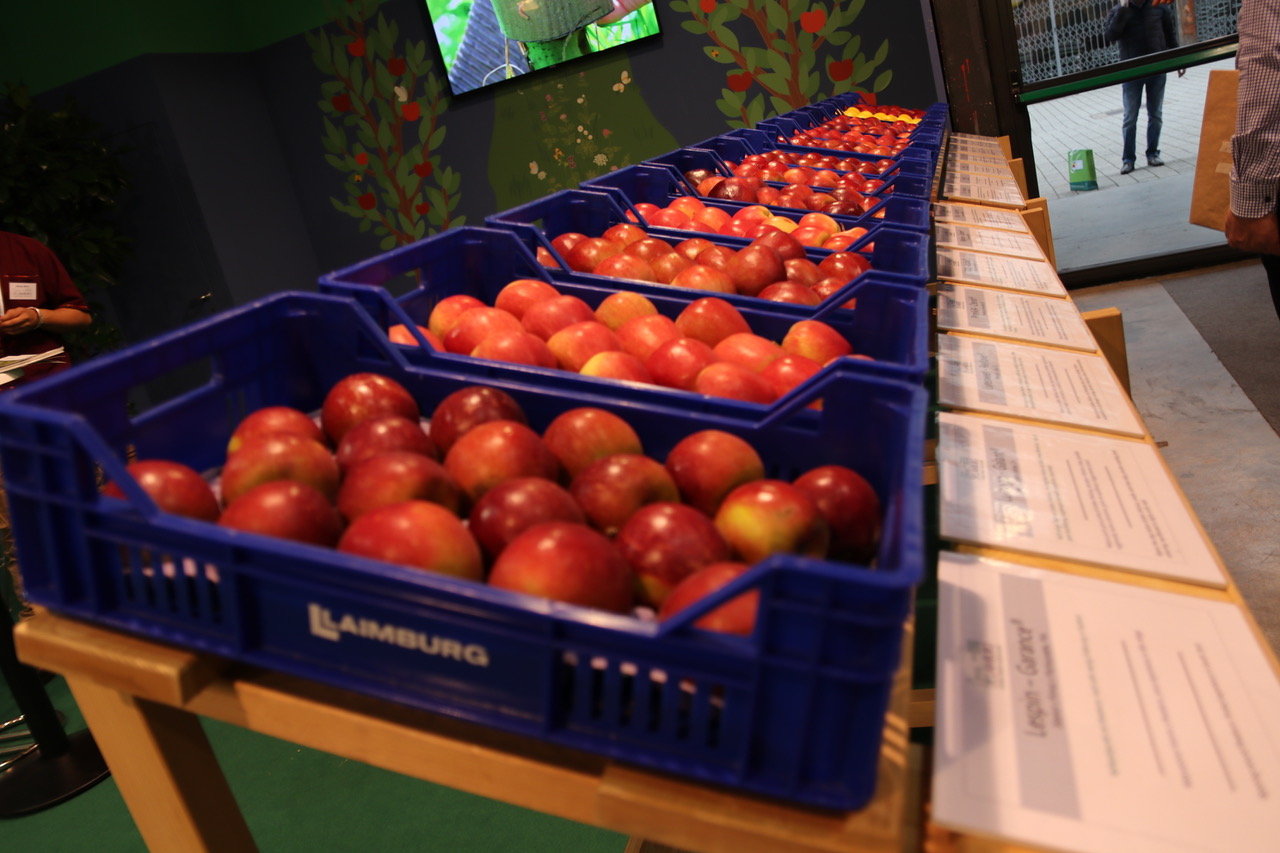 Red-fleshed apples are especially prominent among the club varieties, with a number of such programs in varying stages of development. These include Redlove® (Luresweet) and Red Moon® (RM1 and RS1), both of which are based on scab-resistant varieties with 110 ha and 100 ha planted worldwide, respectively, as well as Kissabel®, which was developed by an international consortium involving 14 partners from four continents, and TC2 Lucyrose® and TC3 Lucyglo®, which were recently launched in the U.S. While optimistic about the opportunities for these varieties, Dr. Guerra also advised caution against bringing new products to market too hastily: “The risk with these red-fleshed varieties, which are a real innovation to the consumer, is that we might place varieties on the market which are not yet meeting the consumers’ demands in terms of quality – what they are used to by the normal apple – and there is a risk that we might cause some disappointment with this new type of product.” Some breeders are also starting to develop deep yellow-fleshed varieties, although there remains some way to go with these genotypes.

Scab-resistant varieties have been another focus for apple breeders around the world, as they permit more sustainable agricultural practices. Despite over 100 years of breeding efforts in this direction and numerous scab-resistant varieties now being available, commercial plantings remain relatively modest with an estimated total of 8,500 ha, by far the most significant of which is (Red) Topaz with approximately 2000 ha planted. 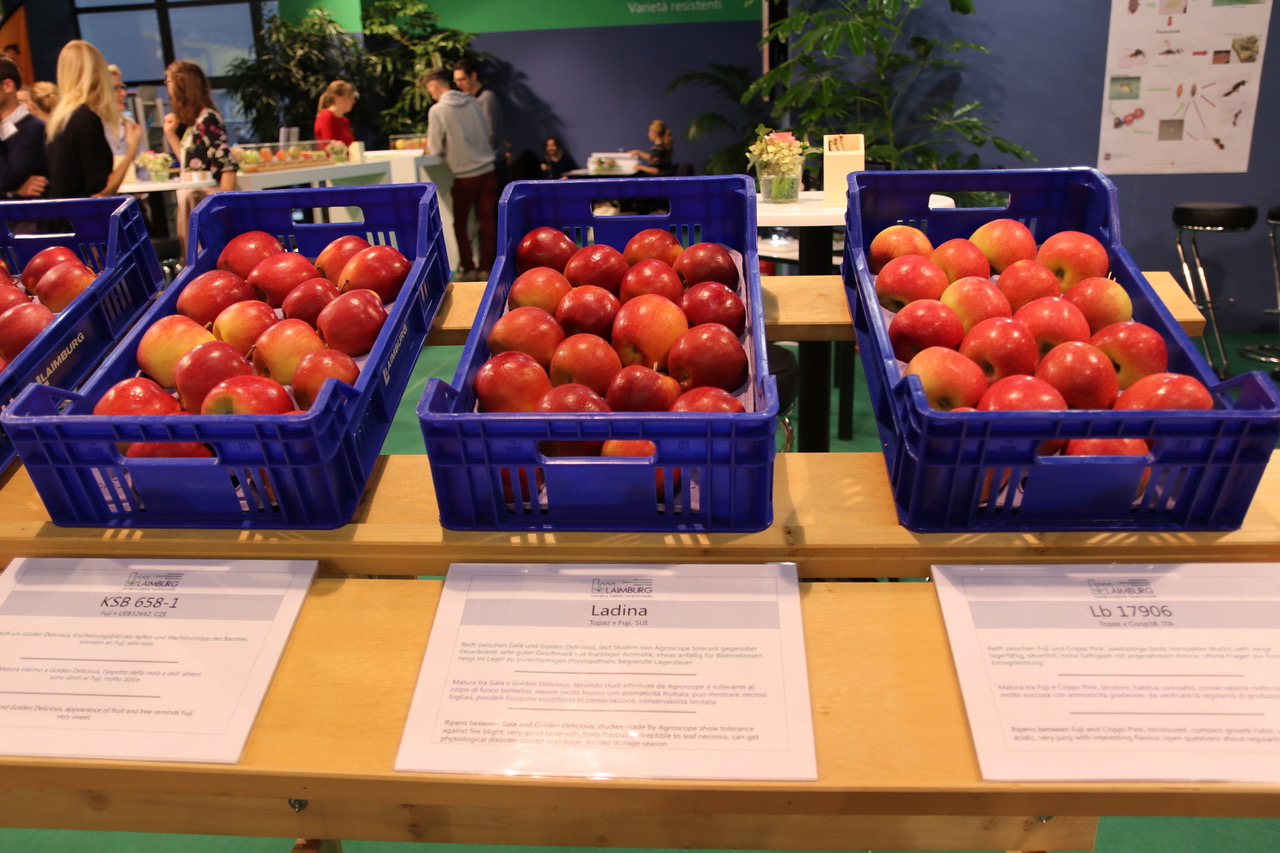 In terms of the varietal assortment in Europe, data from 2016 show a strong increase in Gala plantings over the previous ten years, to a total of 1.314 million tons, representing 14% of total production. Similarly, the biggest plantings in South Tyrol over recent years were Gala. The two key advantages of this variety are that it is an all-rounder in terms of consumer acceptance and an early ripening variety, which leads to fewer issues with fungi. Golden Delicious remained the most popular variety in Europe, with a total of 2.406 million tons, corresponding to 21% of European production. Other popular varieties included Jonagold group (1.262 million tons, 9%), Idared (965,000 tons, 7%), and Red Delicious (632,000 tons, 6%).

Dr. Guerra went on to discuss the varietal assortment for numerous countries around the world. For example, the main varieties grown in Poland are Idared (18.3%), Sampion (10.5%), and Jonagold (9.9%), alongside smaller amounts of Gala and Red Delicious for markets that demand more modern varieties. In Italy, Golden Delicious remains strong despite an increasing trend in Gala, Granny Smith, and other varieties. In fact, Italy is one of the record holders worldwide in terms of club varieties, and in South Tyrol club varieties account for approximately 10% of plantings by area (1774 ha). Meanwhile, in France, although the surface area used for apple production has been decreasing over the last 20–30 years, apples remain the #1 fruit grown in the country (36,400 ha, 1.56 million tons) and organic production, Gala, Pink Lady, and scab-resistant varieties are all increasing. 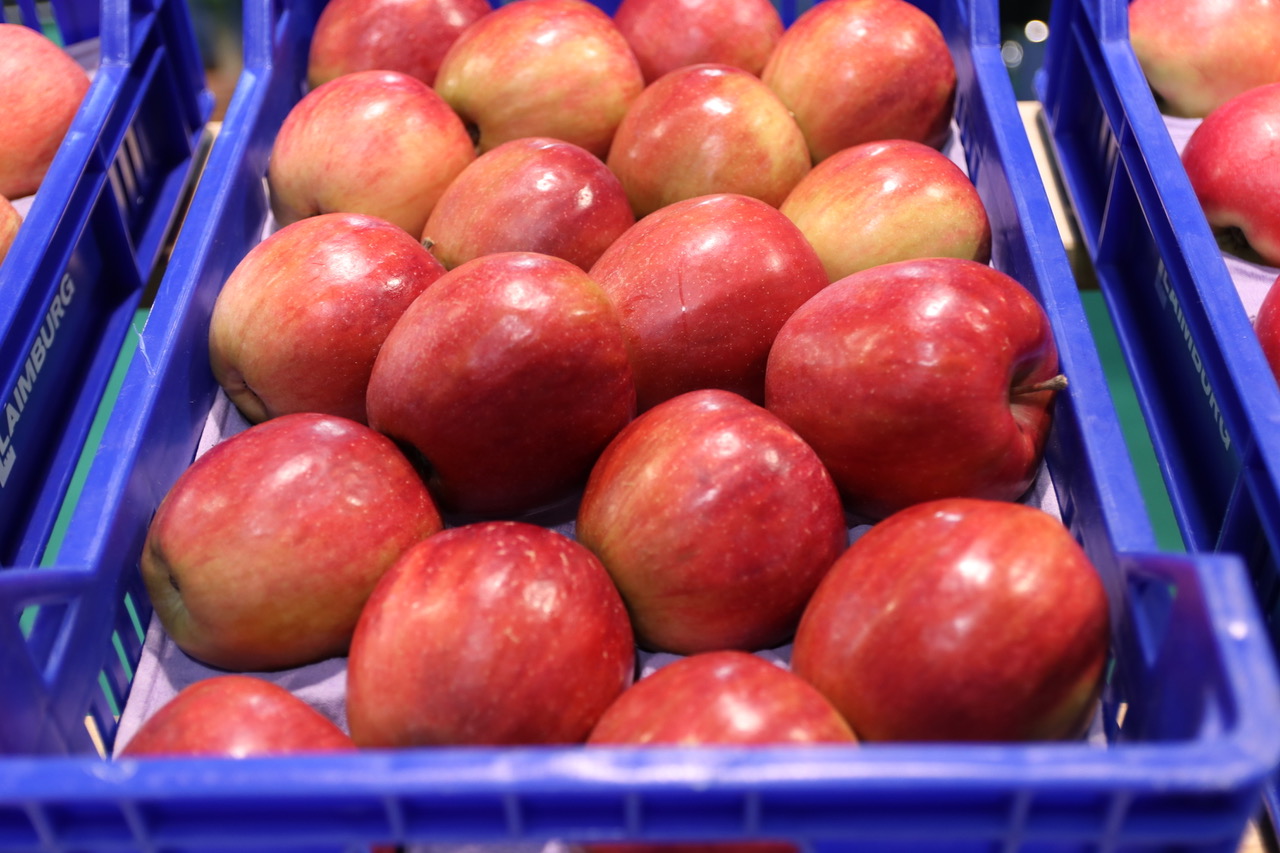 The big players in the southern hemisphere include Argentina (794,000 tons in 2017), Australia (306,000 tons), Brazil (1.329 million tons), Chile (1.675 million tons), New Zealand (506,000 tons), and South Africa (940,000 tons). Gala and Fuji together account for 55% of all production, and the varietal assortments are shifting to match the market demands of the importing countries. For example, in New Zealand, 30% of the planted area is used for club or new varieties, making it one of the top countries for innovation in this sector.

In China, Fuji accounts for over 70% of all apple production owing to its sweetness, storage characteristics, and popularity with consumers. However, a large number of breeding programs are underway and club varieties are increasing in popularity, with the most planted at present being Huaguan (20,000 ha).

Based on these data, Dr. Guerra concluded his presentation by stressing the need for further varietal innovation in the apple industry, especially in regard to increasing production of scab-resistant varieties for greater sustainability. He also noted that the number of apple breeding programs currently underway – approximately 100 in total – is unprecedented in human history, and that it remains to be seen how many of these will be successful and whether exclusive varieties will also start to originate from countries such as China and Poland. His predictions for the next decade included the emergence of multiresistant crosses and a greater emphasis on choosing the appropriate rootstocks.