Zespri MOU a First Step in Producing Kiwifruit in China 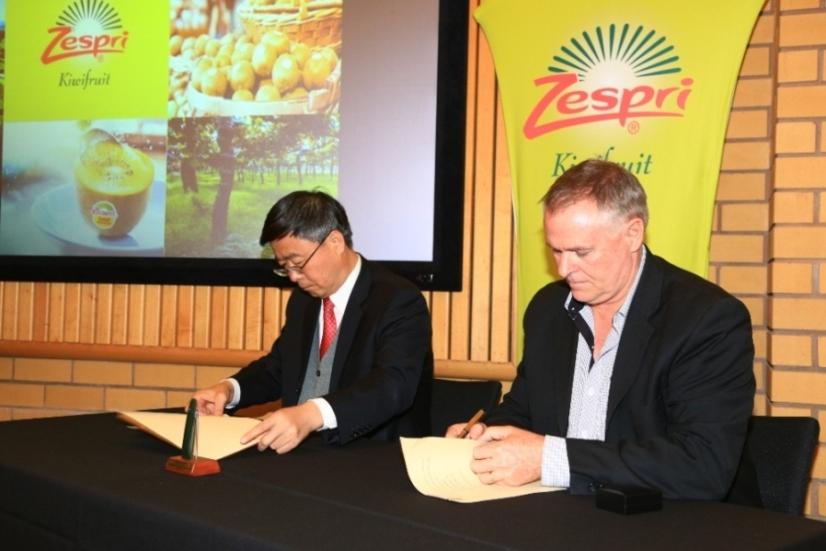 New Zealand’s national kiwifruit brand, Zespri, has confirmed that it has signed a memorandum of understanding with the government of China’s Shaanxi Province, a first step in its exploration of setting up full-scale kiwifruit production bases in China to serve the Chinese market.

The company, which acts as a national brand and marketing cooperative for New Zealand’s kiwifruit growers, plans to establish the trial production bases by April of 2016 and according to Lynch in the coming year will establish a “Centre of Excellence” in the city of Hanzhong in southwestern Shaanxi to “support research, expert exchanges, grower tours and scientific collaboration.”

Lynch characterized Zespri’s status in China as investigative at this time and said it is “not establishing orchards in China – we are setting up trials on two sites to assess whether we can grow premium quality kiwifruit.”

If Zespri did eventually start producing kiwifruit in China, it would culminate a long and circuitous journey for the fruit. The species is native to China, but grew to global popularity only after New Zealand growers started producing it in the early 20th century and eventually rebranded it from “Chinese gooseberry” to “kiwifruit” during the 1950s.

In recent years kiwifruit has become popular in China, especially among the growing middle class, and the country has become a key export market for Zespri, as well as a major producer in its own right.

According to a report by stuff.co.zn, Zespri’s 2015 sales in China are set to grow 40% year-on-year to 20 million trays, of which two million will be from its overseas production bases.

Zespri has already set up production bases in France, Italy, Japan and Korea to provide branded kiwifruit from the northern hemisphere during the period from April to October when New Zealand-grown fruit are not available. However transporting these kiwifruit to China, sometimes with up to 40 days in transit, poses quality assurance challenges.

Thus the impetus for Zespri to seek a way to grow kiwifruit in China for the Chinese market that can meet the brand’s quality standards—with growing partners that can safeguard the Zespri brand. Shaanxi, which has a relatively developed industry and produces more kiwifruit than any other province, is a logical place for Zespri to explore as a production base.

Zespri’s success in the Chinese market this year seems to validate its aggressive new marketing strategy based on working with local partners to open flagship stores across the country, starting with a flagship wholesale store in Shanghai opened this April.