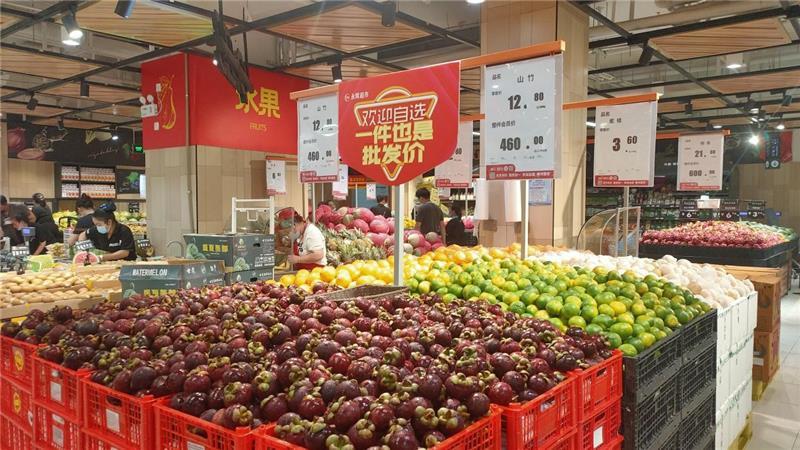 On Sept. 8, Li Songfeng, the new CEO and former CTO of Yonghui Superstores, sent a company-wide internal letter announcing Yonghui’s intention to become a digital omnichannel retail platform based on fresh produce and centered around the customer. From an organizational standpoint, Yonghui will also move toward a flatter structure and focus on promoting young talent.

In the first half of this year, Yonghui faced multiple challenges due to both internal and external factors. According to Yonghui’s official report for the first half of 2021, this was the first half-year period in which the company reported a deficit, with a revenue of 46.8 billion Chinese yuan ($7.28 billion) — a year-on-year decrease of 7.3%. The report also indicated a 13.7% year-on-year decrease in same-store sales. Gross profit from Yonghui’s core areas of business — fresh produce and processing — came in at 10.3%, a 4.7% decrease compared to the same period of last year. Financial reports also indicate that Yonghui’s seven major operating regions all saw drops in revenue to varying extents; the two regions with the greatest drops in revenue were Region 4 (Chongqing, Hunan, Hubei, Guizhou and Yunnan) with a 14.2% decrease and Region 6 (Guangdong and Guangxi) with a 15.5% decrease.

Meanwhile, Yonghui’s online business and warehouse stores have performed remarkably well over the same period. During the first half of the year, Yonghui’s online sales revenue reached 6.81 billion yuan ($1.06 billion), an impressive 49.3% year-on-year increase. Online sales represented 14.1% of total revenue, compared to only 10% for the whole of 2020. The Yonghui Life app serves nearly 1,000 stores and has 72.2 million members, with 22.5 million new users registered over the period of the report — a 90% year-on-year increase. The average repeat purchase rate was 47.4%.

In terms of the future direction of Yonghui Superstores, the company has indicated that it will employ a steady and pragmatic approach to strengthen its fresh produce supply chains and operations, while also establishing an omnichannel service integrating in-store and home delivery options. With digitalization and a consumer-centric focus as its guiding principles, Yonghui Superstores will thus move toward the future as an omnichannel retail platform.