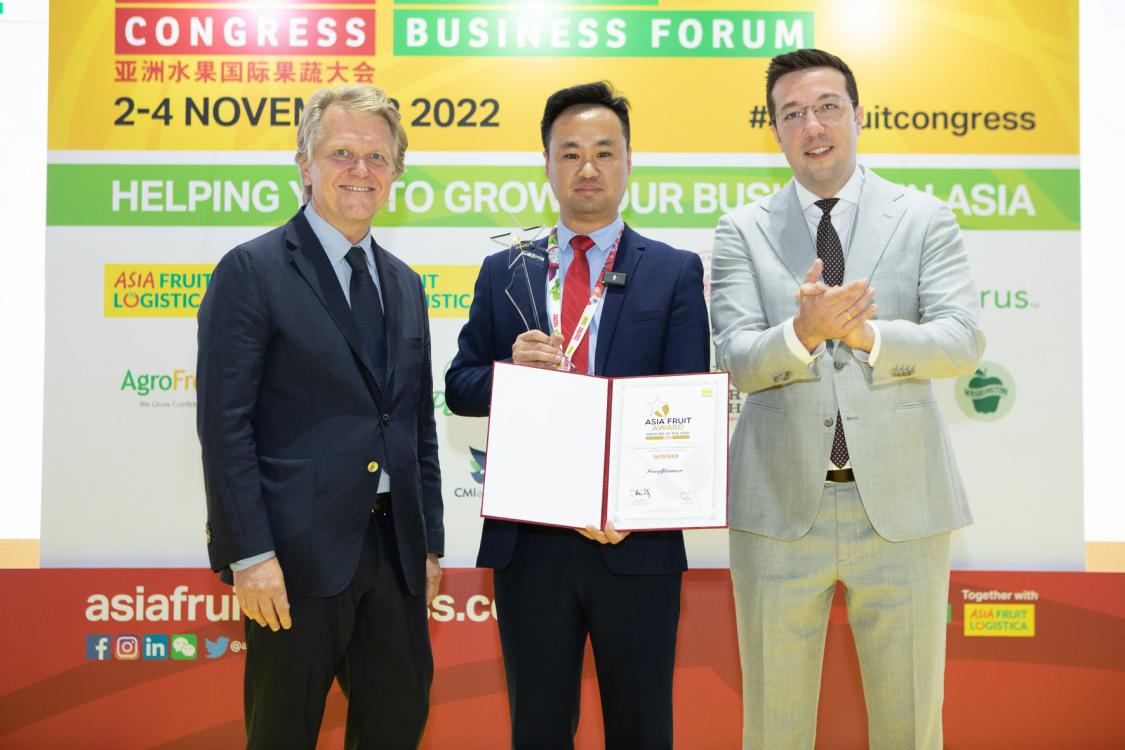 Asia Fruit Logistica and Asiafruit magazine on Nov. 3 announced the four Asia Fruit Award Winners as part of the Nov. 2 to 4 Asia Fruit Logistica trade show, which this year has made its long-awaited return to an in-person format while relocating from Hong Kong to Bangkok. The four category winners were:

Marketing Campaign of the Year: ClemenGold

ClemenGold debuted in China in 2013 with limited volumes to test the market and its appetite for the brand. Sales increased sixfold between 2019 and 2021, reaching a range of wholesale and retail customers. China now forms a key part of ClemenGold’s sales strategy, and the market interaction with the brand has exceeded the company’s expectations, Asiafruit Magazine editor John Hey noted.

ClemenGold is a registered brand for premium quality mandarins, including the Nadorcott variety. The soft citrus variety historically found less favor in China compared with other markets, with an impression among the import trade that traditional, firm mandarin varieties were superior. ClemenGold has developed a strong following in China with its focus on consistent quality and reliability of supply, Hey pointed out.

The marketer has selected a group of wholesale and retail partners who have embraced ClemenGold’s branded approach and used their sales and marketing expertise to conduct a series of innovative activities. These range from high-profile branding on the exterior of buses on one of Shanghai’s busiest bus routes to ClemenGold-themed pop-up retail shops and consumer events.

Importer of the Year: Goodfarmer

Celebrating its 20th anniversary in 2022, “importer of the year” winner Goodfarmer was recognized for its success in building long-term relationships with global partners to become one of China’s leading fruit importers.

Goodfarmer was also singled out for its success in navigating the pandemic and the associated global supply chain disruption. The company has leveraged its long-term relationships with shipping partners to maintain the continuity of import programs, Hey noted. Goodfarmer also adapted quickly to pandemic disruptions and to its clients’ needs, ramping up its home-delivery business and keeping consumers supplied with high-quality fruit.

Goodfarmer’s continued growth also reflects the substantial investment the company has made in developing its nationwide teams and distribution infrastructure over the past ten years, said Hey. This network spanning 30 major cities has enabled the group to service its customers efficiently and add value for premium brands.

While continuing to develop core import categories such as bananas and pineapples, Goodfarmer has diversified its product range. It has ramped up its focus on fast-growing products, such as tropical fruits from Thailand and Vietnam. In addition to being a licensed distributor for Zespri kiwifruit in China, Goodfarmer has signed strategic partnerships with leading brands such as Mr Apple, Rockit, T&G Global and Driscoll’s. At the beginning of this year, it also entered a partnership with Focus Media, one of China’s largest out-of-home advertising networks, to build the Goodfarmer brand as a consumer-facing brand.

“We have achieved good results in the global fruit business through our professional management systems and our industry knowledge,” said Owen Zhang, Goodfarmer’s China general manager.

Makro, Thailand’s leading wholesale chain, was recognized for its commitment to suppliers and for the efficiency of its operations. In addition to promoting sales of imported fruits, it has undertaken extensive promotions to support local fruit growers in Thailand, especially during the pandemic where export trade has been impacted.

Makro was one of Thailand’s first wholesalers to develop an omnichannel business in 2019, and it has begun to offer sales of fresh fruit online.

The Impact Award was presented to Nick Kukulan and Paramount Export Company in recognition of their pioneering efforts to develop the fresh produce trade into Asia.

Founded in 1939 to represent US West Coast growers and expand international market opportunities for them, Paramount Export helped to pioneer the introduction of quality fresh produce by air and sea freight to global markets under the leadership of Nick’s father, Joe Kukulan. Joe played a key role in opening-up markets in Asia, with Nick building on those efforts when he joined Paramount Export in 1977.

The company developed a high level of expertise in logistics and produce selection for customers’ specific requirements. It later helped to develop the range of global supply sources for markets in Asia by establishing grower relations throughout the world, including Australia, Chile, Egypt, France, New Zealand, Peru, South Africa, Spain and Turkey.