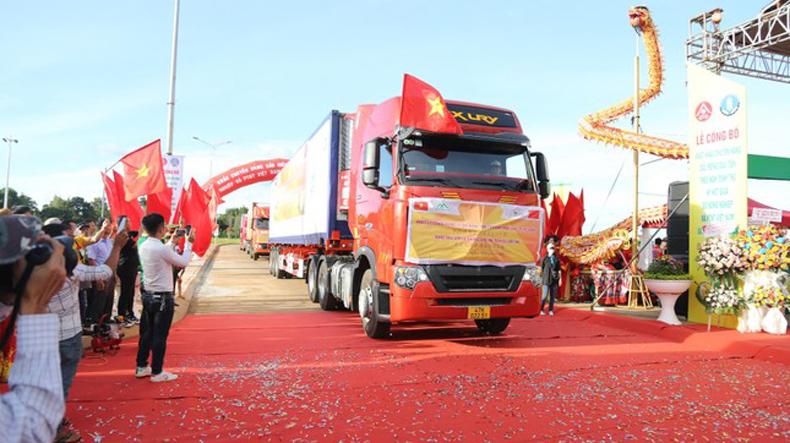 Less than two months after Vietnam received formal market access to China for its fresh durians, the Southeast Asian country on Sept. 17 exported its first ever shipment of the fruit to China by normal trade channels, according to Vietnamese media reports. The shipment’s departure and accompanying ceremony came just days after reports surfaced that numerous Vietnamese enterprises had been using spurious growing area and packhouse codes in preparation to pass off unapproved fruit as legitimate and export it to China, leaving Vietnamese officials scrambling to reassure the Chinese side that Vietnam takes seriously its compliance to the mutually agreed phytosanitary and quality protocols.

The roughly 100 metric tons of durians in Saturday’s trial shipment were grown in Dak Lak province, Vietnam’s second-largest durian-producing cluster, which lies about 250 kilometers northeast of Ho Chi Minh City in the Central Highlands region. The General Administration of Customs of China formally announced only on July 27 that China would permit Vietnamese durians to cross the border via normal trade channels. This left staff at the five exporters contributing to the first shipment working overtime to affix newly granted growing area and packhouse registration information to the fruit prior to shipment.

Historically, significant quantities of Vietnamese durians have found their way into China by gray channels such as re-exportation via Thailand or by crossing Vietnam–China land ports through “border trade” import schemes. China’s border trade schemes were originally intended to provide economic stimulus to small local companies and individuals based in China’s less developed border regions. However, these schemes eventually developed into a way for Vietnamese exporters to send large volumes of fruit to China without going through the complex and costly steps required for the normal export process. In the case of fruits such as durians, border trade and re-exportation also allowed for the export to China of fruits not approved by the GACC for entry via normal trade channels.

Vietnam’s overreliance on border trade started coming to a head at the beginning of 2019, when China stepped up its inspection and enforcement of Vietnamese fruit entering China as border trade. After the coronavirus pandemic hit, temporary border closures and strict quarantine measures put in place by China compounded the challenges for Vietnamese exporters and contributed to tumbling gate prices in Vietnam for durians and other fruit.

While China’s opening to the import of durians by normal trade channels is welcome news for Vietnam’s embattled fruit export sector, this mode of export is more difficult and expensive. Growers, processors and exporters must adhere to a series of phytosanitary and quality requirements laid out in the bilateral export protocols signed with China, such as developing GAP plans and implementing strict pest prevention measures. All growing areas and packhouses wishing to produce fruit for export to China are required to apply to the GACC to become registered exporting entities and must display their registration information on the packaging.

However, some unscrupulous exporters and growers in Vietnam apparently hoped to take advantage of the benefits of normal trade without incurring the associated costs. The 51 approved growing area codes registered with the GACC are only capable of producing approximately 68,000 metric tons of durians every year, yet the potential annual output declared by enterprises claiming to grow durians within these region codes has already hit 1.3 million metric tons, reported Vietnamnet Global in an article entitled “Food watchdog to tighten management to protect honest businesses.” According to the article, Minister of Agriculture and Rural Development Le Minh Hoan convened a meeting on Sept. 13 dedicated at least partly to affirming his ministry’s commitment to combating fraudulent durian exports.

“Without strict control and compliance with the provisions of the protocol signed between Vietnam and China, it will result in fraud,” the article stated. “Thereby, the quality of goods is not ensured and violates export regulations. Subsequently, it will tarnish the reputation of Vietnamese agricultural products in the world market.” Aside from a tarnished reputation, fraudulent products and quarantine or quality issues could lead to the GACC wholly or partially suspending durian imports from Vietnam.

If Vietnam can stay on the GACC’s good side and keep normal export channels open, it could be a lucrative opportunity for the country’s durian industry: durians are China’s most valuable fresh fruit import and China is the world’s largest market for imported durians, with 822,000 metric tons worth $4.21 billion imported in 2021. Until very recently, Thailand supplied all of China’s normal fresh durian imports owing to its status — prior to the addition of Vietnam — as the only country with official market access to China for its durians, alongside China’s limited domestic production.