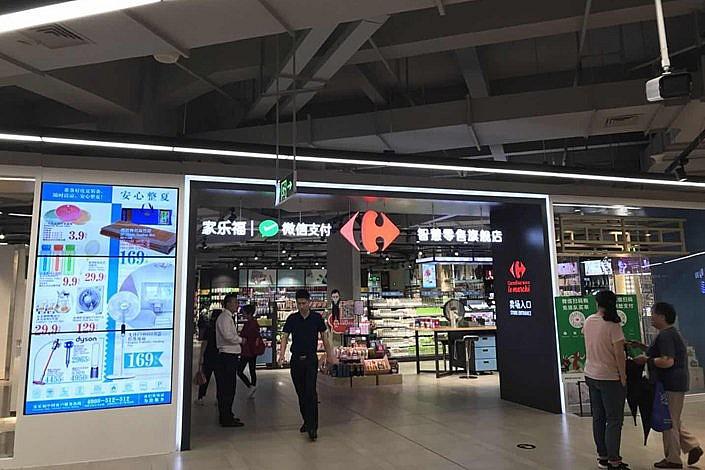 It is the latest entry in China’s now-crowded field of “new retail” supermarket brands: small to midsize supermarkets with an emphasis on fresh ingredients and prepared food. As traditional wet markets retreat from China’s urban centers, a range of retailers and tech companies are vying to become the default choice for consumers’ daily grocery shopping. China’s big three tech companies, Alibaba, JD and Tencent, all have skin in the game.

The new Le Marché store, which appears to have benefited from technology cooperation with Tencent, reportedly includes a “scan and go” type system similar to a scheme already implemented in some Chinese Walmart stores. Customers can bypass checkout lines by simply scanning items as they put them into their cart or basket. Those who opt for traditional checkout at Le Marché can choose to authorize their payment via a facial recognition system installed at the cash register.

Carrefour was an early leader in the hypermarket segment in China, before subsequently facing slowing growth and loss of market share to Sun Art Group and Walmart. Elsewhere in the world it has been slow to adopt to the trend of grocery ecommerce, with just 1% of its sales coming from ecommerce in 2016, and has faced competition from the likes of Amazon.

Carrefour announced in January of this year that it had signed a strategic cooperation agreement with Chinese tech company Tencent, which runs the WeChat mobile messaging and payments service WeChat, in which, “Tencent will further develop the retail services offered on its social platforms and promote the use of WeChat as well as WeChat Pay, cloud computing and other services within the Carrefour ecosystem,” according to a Carrefour statement. “The contemplated scope of cooperation includes key partnership areas such as cooperation on data, smart retail, mobile payment, in-store experience and data analysis to boost Carrefour China’s customer traffic.”

Carrefour at the same time announced that it had signed a term sheet for investment in its China operations from Tencent and retailer Yonghui. But the terms of the potential investment, or whether the deal ever went through, are unclear.

The opening of Le Marché marks a deepening of the schism in Chinese retail. On one side are Tencent, JD, Walmart, Yonghui, and, now, Carrefour. On the other are Alibaba and Sun-Art.

Walmart owns a significant passive stake in JD, but depends on JD’s army of couriers for its grocery home delivery services. JD has recently launched its own new retail brand, 7Fresh. JD has also invested in Yonghui, which runs not only hypermarkets, but also the smaller and higher end Bravo YH concept, and the even smaller and even higher end Super Species new retail concept. Walmart in April of this year launched its own smaller format new retail concept, Huixuan, in Shenzhen.

Alibaba in November of last year invested $2.9 billion in Sun Art, in which Carrefour’s French retail rival Auchan also holds a similar stake. Sun Art runs the Auchan and RT Mart hypermarket brands in China. Alibaba, whose founder Jack Ma coined the term “new retail”, was first into the new retail fray with its Hema supermarkets, Alibaba has said it hopes to open 2,000 Hema outlets within the next three to five years. Alibaba’s Alipay mobile payment service is WeChat Wallet’s only serious rival in China in the mobile payment space.

While the existing ‘new retail’ brands have heavily promoted online ordering and home delivery in an hour or less to customers within a certain radius of an outlet, there was no immediate word about Le Marché’s delivery options.