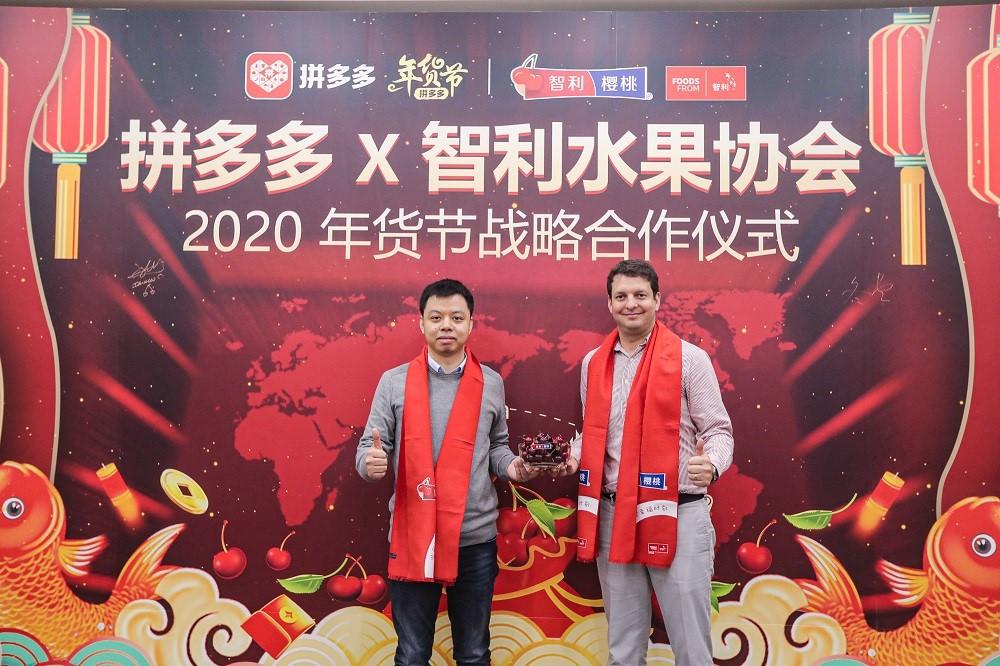 As part of its new initiatives for this season’s cherry campaign, the Chilean Fruit Exporters Association (ASOEX) has starting this month partnered with China’s Pinduoduo e-commerce platform to promote Chilean cherries during Pinduoduo’s Chinese New Year Shopping Festival. Founded in 2015, Pinduoduo has quickly emerged as the second largest e-commerce platform in China through its innovative social group buying model, with 536.3 million active users and 3.6 million merchants.  Fruits are one of the most popular products sold on Pinduoduo’s platform, making it an ideal channel for cherries from Chile.

“Just in time for Pinduoduo’s annual Chinese New Year Shopping Festival, cherries from Chile are leaders in our strong sales of fruit,” said Pinduoduo co-founder Dong Zao. “We expect this cooperation will have a positive influence on the sales, traceability and supply of premium imported fruits on our platform.”

So far this season, Pinduoduo’s sales of Chilean cherries have increased by 230% compared to the same period last year. It is forecast that during the Chinese New Year Shopping Festival, the platform will see over 1 million orders of Chilean cherries.

According to Pinduoduo’s data, orders for Chilean cherries this year continue to be concentrated in wealthy coastal areas like Shanghai, Beijing, Guangzhou and the Yangtze and Pearl River deltas. However, the rate of consumption growth in third-tier and lower cities is higher than that of first- and second-tier cities, which represents a narrowing of the traditionally large consumption gap between urban and rural areas.

Some of Pingduoduo’s merchants have started to speed up their supply chain through direct procurement. After being harvested and packed in Chile, shipped to Hong Kong and clearing customs in Shenzhen, Chilean cherries are sent directly to a facility in Foshan for secondary sorting and repacking, skipping the traditional wholesale markets. From there they are sent directly to consumers around the country. As a result, Chilean cherries can arrive at a consumer’s door as soon as three days after clearing customs.

Pinduoduo’s order data show that consumers in the markets in China with the greatest growth potential tend to prefer to purchase cherries packed in units of 2–4 kilograms. This finding has led Pinduoduo to propose to ASOEX the possibility of changing the original large packaging units of cherries exported from Chile to smaller consumer packing. This could allow the direct shipment to consumers of cherries in their original packaging, without repacking in China, providing an even better eating experience.

Through cooperation and leveraging Pinduoduo’s data-driven understanding of the end consumer, ASOEX will be able to gain firsthand information and thus provide the highest-quality fruit to Chinese consumers while catering to their preferences.