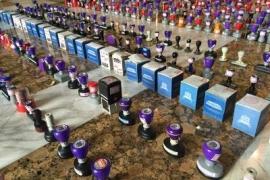 According to media reports, customs officials in Guangzhou discovered more than 40,000 tons of fresh cherries, grapes and other fruit from the United States, Chile, South Africa and other countries, valued at nearly RMB 600 million (about USD 1 million).

The Guangzhou Customs Bureau had two crackdowns last year involving three companies and 28 individuals. Starting in January 2012, the companies involved used methods such as false trade reports, falsified transaction prices, and fake origin and quarantine certificates in order to smuggle fruit. For example, companies concealed the fact that their goods were “consignment” by declaring them as general trade goods, thereby evading proper customs procedures. The smugglers used fake documents such as certificates of origin, inspection, and quarantine, or false contracts in order to process the shipments. Additionally, nearly 800 counterfeit chops were seized that were used for stamping documents for procedures such as fruit production, procurement, and customs clearance.

A Guangzhou customs official stated that smuggled fruit has a negative impact on the domestic economy. Foreign fruit that has not passed quarantine when entering the country also poses a significant epidemic risk.