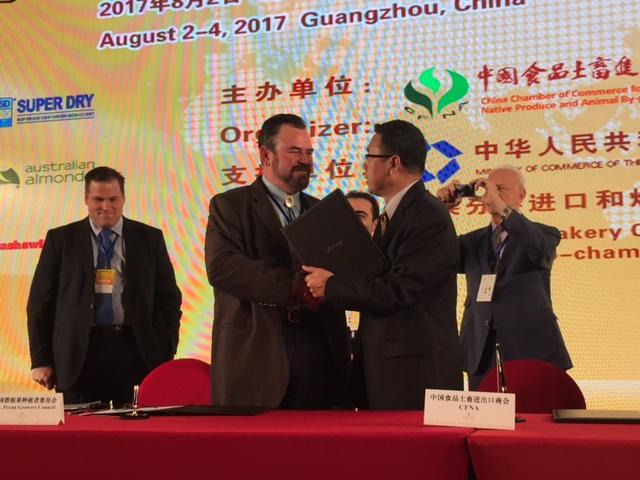 From August 3rd – 5th, the China International Tree Nuts Conference 2017 was held by the China Chamber of Commerce of Foodstuffs and Native Produce (CFNA) in Guangzhou. More than 300 participants from 20 different countries took part in the conference, including domestic and international nut traders, processors, roasters, associations, and government officials. At the conference, Kevin Ivey, President of the U.S. Pecan Growers Council, signed a Memorandum of Cooperation with CFNA in order to promote and develop deeper trade ties between China and the United States. Mr. Ivey also delivered a comprehensive presentation on the global supply and demand for U.S. pecans over the past 5 years and provided production and price forecasts for the 2017/2018 season.

According to data provided by Mr. Ivey and U.S. Pecans, the total value of U.S. pecan exports to mainland China grew by 72.9% to $24.1 million in 2016. This is not an isolated trend: over the past several years, U.S. pecan exports to mainland China have shown signs of strong and consistent growth. In 2014, these exports were valued at only $2.4 million, but by 2015 this had increased by 470% to nearly $14 million with little sign of substantially slowing down. Shelled U.S. pecans are also seeing increased export to mainland China, having increased 28.8% in 2016 to 304 tonnes valued at $2.9 million.

Other global markets for U.S. pecans have seen varying levels of growth, with shelled pecans being the main driving force behind many large increases in export. Europe is the second largest market for U.S. pecans behind China and 2016 was an especially good year for American pecan exports to the European Union, with exports up by 24% in tonnage and 37% in value over 2015 levels. This growth can be attributed largely due to significant increases in-shelled pecan imports by the Netherlands and across-the-board increases in pecan imports by the United Kingdom and Germany. The second largest market for U.S. pecan exports in Asia continues to be Vietnam, which saw an overall decrease in value by 23.7% in 2016, declining from $47 million in 2015 to $35.9 million in 2016, a far cry from the 2014 peak of $88.7 million. This was driven primarily by decreases of in-shell pecan imports, as shelled pecans demonstrated great promise in the market, growing by both volume (from 196 tonnes in 2015 to 334 tonnes in 2016, an increase of 70.4%) and value (from $1.2 million in 2015 to $2.4 million in 2016, an increase of 98.6%).