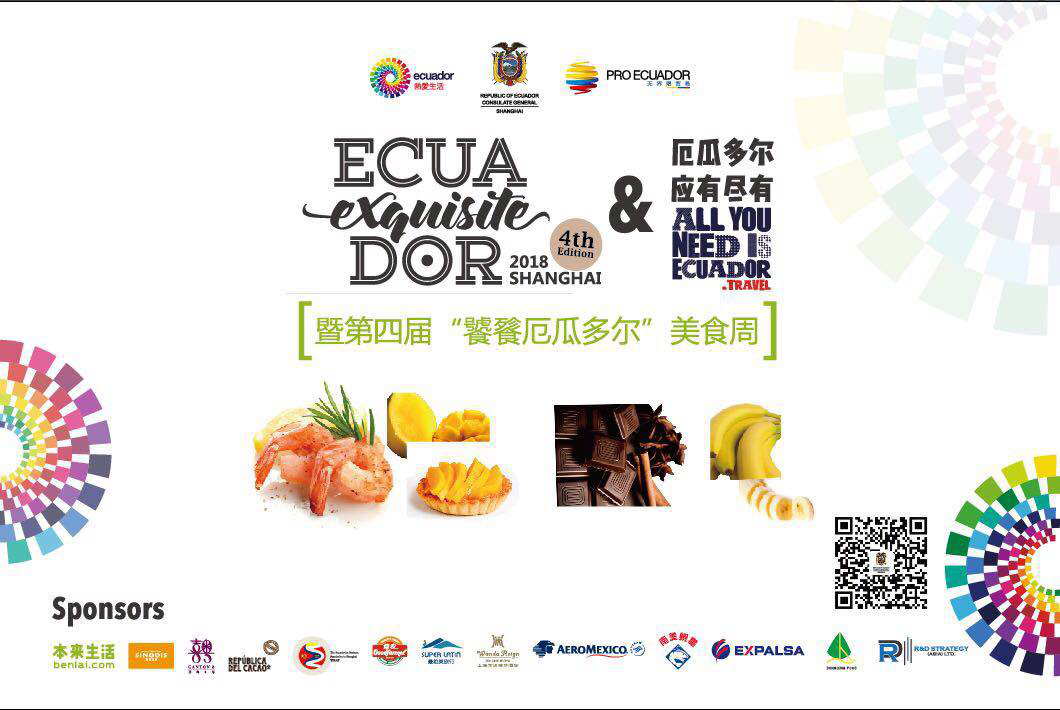 The long waited 4th edition of “Ecuador Exquisite 2018” will finally take place on the 7th of September.This event has been created to promote Ecuador as an exporter of premium products, as well as promoting Ecuadorian gastronomy and talents. Exquisite Ecuador is organized by ProEcuador and the Consulate General of Ecuador in Shanghai. 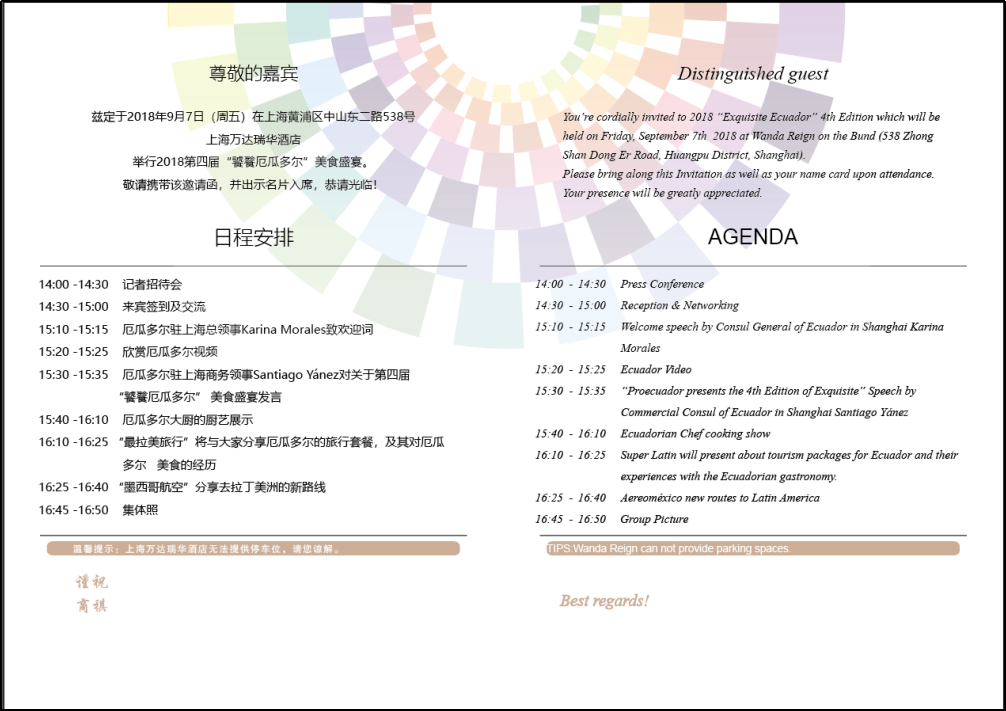 On the 7th September the Ecuadorian Chef, Javier Endara, coming from Madrid, will welcome visitors from media, chefs, restaurant owners and travel agencies at Wanda Hotel with his delicious Ecuadorian cuisine with Chinese touch. During his Cooking Show, he will show the live preparation of some distinctive dishes from Ecuador using the Ecuadorian products available in the Chinese market: Shrimp, Banana and Chocolate.

During the event, the UNIQUE characteristics of the Ecuadorian products:  SHIRMPS, CHOCOLATE and BANANA will be presented to the attendees. In addition, the travel agency SUPER LATIN and Aereomexico will present interesting information regarding tourism packages and routes for traveling to Ecuador and their experiences with the Ecuadorian cuisine.

OUR SHRIMP
Ecuador is a pioneer in the cultivation of shrimp in the American continent. The shrimp producing sectoris one of the most dynamic industries in the country. It is a product with excellent flavor, quality and texture that allows it to be recognized as the best white shrimp in the world. Because of the way of cultivation, the use of probiotics and the environment where the shrimp is grown, we can say that Ecuador has sustainable shrimps farming pratices. 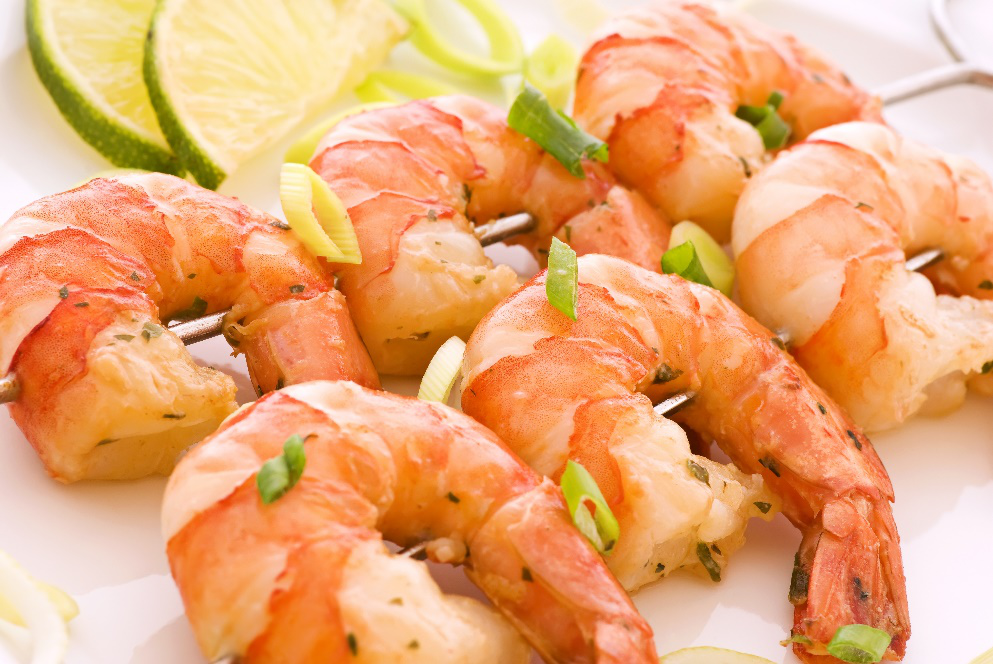 Due to its privileged climate and location, Ecuador can make an average of 3.5 harvests per year, which makes it the best shrimp supplier in the world for its sustainability.
You can check here the great initiative started by Ecuadorian exporters
http://www.sustainableshrimppartnership.org

Ecuadorian chocolate is one of the most exquisite in the world and is developed in close relationship with the cocoa sector.In Ecuador, Cacao Arriba is the most demanded fine cocoa among chocolate manufacturers, due to the quality of its grains and the fineness of its aroma. This type of grain is used in all refined chocolates. Ecuadorian chocolate is distinguished by its purity, specifically, the flavor and aroma of cocoa. Much of the national production for export is done by hand.

The chocolate industry in Ecuador, in order to diversify the market and satisfy the most demanding palates internationally, has incorporated natural ingredients such as fruits and aromatic herbs into its preparations, among which we can highlight the banana, passion fruit, ginger etc. 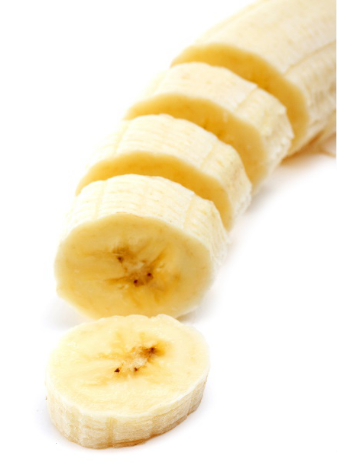 Banana is the most consumed intertropical fruit of the world. Ecuadorian banana is highly demanded in the International Market due to its quality. Ecuadoris one of the leading producers and exporters of high quality banana in the world,meeting standards of very demanding markets like the European Union and the United States, as well as the requirements for certification to ensure compliance with social and environmental standards.

Fairtrade exportation benefits more than 70,000 small producers in the rural areas; and more than 2,000 workers, in the certified private companies, also have access to the benefits of this certification.

Also the sector allows including numerous multiethnic communities, and according to the Small producers’ organizations, 48% of their members are women.

THE CHEF JAVIER ENDARAwww.javierendara.com
An inspiring event with inspiring people!

Chef Javier Endara is an Ecuadorian cook chef based in Spain. He has been in many of the great kitchens of the country, but it is with the famous Spanish chef Andres Madrigal (Balzac, Alboroque, and Bistro Madrigal) with whom he was trained as a chef and advisor. He mainly works with Fusion Cuisine; currently he is a professorat KITCHEN CLUB and advisor at “Casa Benteveo” in Madrid.

Chef ENDARA thinks that the Ecuadorian cuisine is rich in flavors which can fit with the Chinese market, and that has a versatile and fun cuisine. Also he believes that the quality of the Ecuadorian products are the reason why its cuisine easily matches and adapts with the international cuisine .

Chef Andrès Madrigal nicknames Javier Endara the “enfant terrible”of the Spanish gastronomy. His cooking is innovative, he enriched Andrès Madrigual’s restaurant menu, a restaurant which already has 1 Michelin’s star and got the“2008 Best Restaurant” award by the Gourmetour Guide. Javier Endara is not only a gastronomy fan, he is also a rocker, he created his band: Maverick.