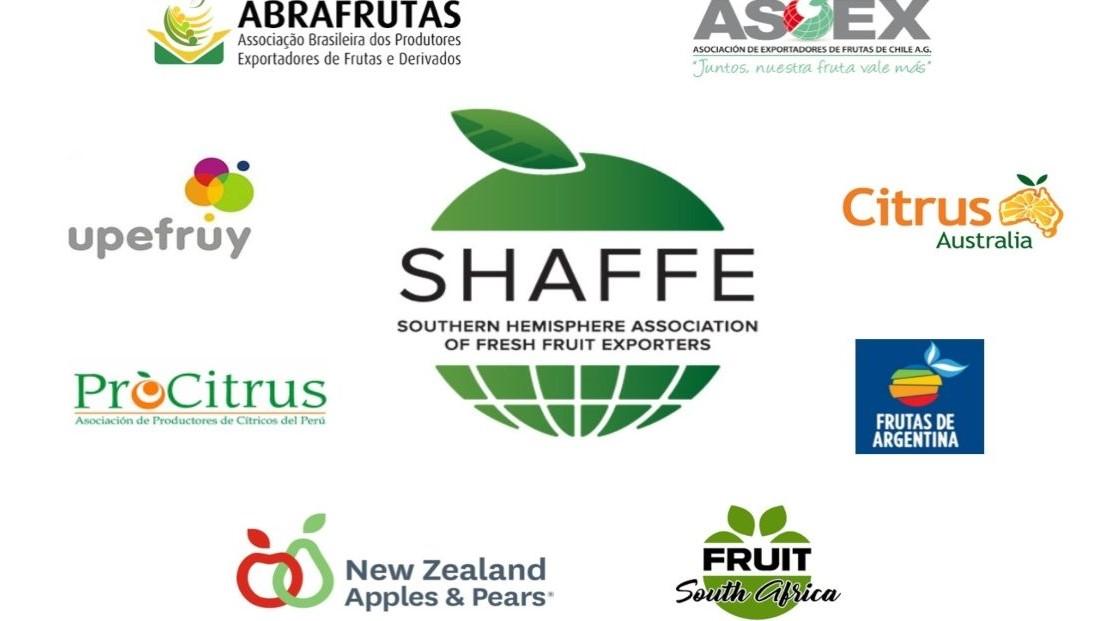 SHAFFE is a trade organization comprising many leading trade associations from across the Southern Hemisphere, including major fruit-producing countries such as Argentina, Australia, Brazil, Chile, New Zealand, Peru, South Africa and Uruguay. Together, these member countries represent 11 million tons of annual fresh fruit exports, valued at $15.7 billion as of 2020 — approximately 25% of the global fruit trade.

With respect to export destinations, the two largest importers of Southern Hemisphere fruit in 2020 were the United States and China, followed by the Netherlands, the United Kingdom and Japan. Data from the survey reveal that in 2020, the United States accounted for 18% of total fruit exports from SHAFFE member countries with a value of $2.8 billion. China was a close second at 17% with a value of $2.6 billion. A comparison of SHAFFE export figures between 2016 and 2020 reveals rapid growth in the Chinese market share — a 95% increase over four years, compared to a more modest 25% increase for the United States, reflecting an increasingly robust demand for imported fruit among Chinese consumers.

The survey also asked members to identify major market access challenges, as well as domestic challenges in their respective countries. Unsurprisingly, COVID-related issues as well as the resulting logistical delays were perceived as the largest market access challenges, cited by 47% and 58% of respondents, respectively. Another significant challenge raised by 41% of respondents was “domestic protectionism,” with calls to “eat local” posing challenges for fruit producers and exporters.

Closer to home, the most cited domestic challenges were rising costs of agricultural inputs (56%), government policy related issues (41%) and issues related to COVID-19 (32%). Domestic demand (6%) was not an issue of concern, reflecting the fact that most SHAFFE member countries are heavily export oriented.

Despite the global setbacks caused by the ongoing pandemic, Southern Hemisphere trade association members maintain a generally positive outlook on the 2021 fruit export season and the future of the industry in general. When polled about their perception of the 2021 export season, 63% of respondents rated their outlook as “good” and 26% as “fair,” with smaller numbers responding “poor” or “excellent.” When asked to rate their perception of the fruit industry in their country in the next five years, 70% responded “good,” 17% answered “fair” and 11% chose “excellent.”

The impact of the pandemic can also be clearly seen in the members’ perception of major short-term growth areas for fresh fruit consumption. E-commerce and health trends were considered the top growth areas, each being cited by 60% of respondents. Following this were low-cost retail and organics, both at 28%. Sustainability came in at 26%, with the suggestion that it is now seen as more of a basic compliance requirement than a growth area. Given the current context, the food service industry was one of the lowest-ranked areas for growth, at only 6.5%.

In terms of fruit varieties, the top five exports from the Southern Hemisphere between 2016 and 2020 were grapes, kiwifruit, blueberries, apples and cherries. Of these, cherries and blueberries showed the highest export growth, increasing by 110% and 72%, respectively, over the four-year period. Citrus fruits, while not making the top five exports, were highly represented among member organizations, with 54% of respondents saying that their organization was involved with citrus, followed by table grapes (35%), blueberries (24%), apples (22%), avocados (20%) and pears (17%).

This is the first time that SHAFFE has conducted the Southern Hemisphere Fresh Fruit Outlook Survey. In the future, SHAFFE plans to continue running the survey on an annual basis, with the goal of connecting the Southern Hemisphere fruit industry through knowledge sharing, facilitating market access and promoting the global fruit trade.