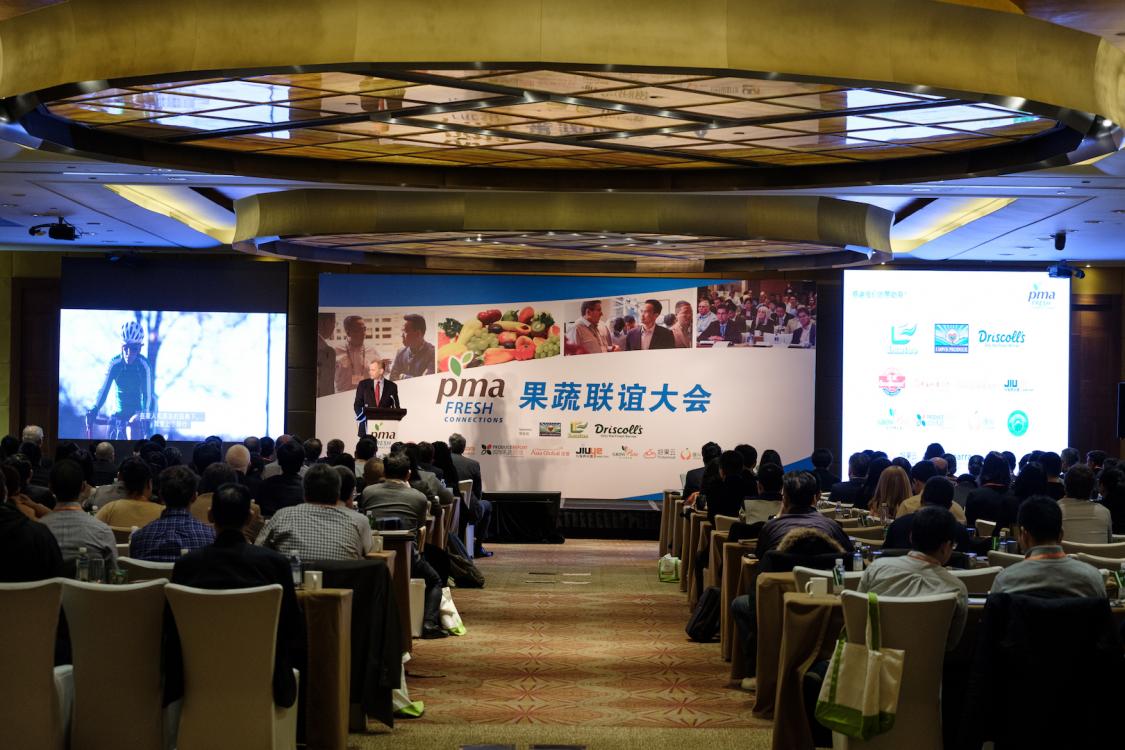 At the opening ceremony, Richard Owen, Vice President of Global Business Development at PMA US, announced, “As a global trade organization for the fresh produce industry, PMA brings together some of the top supply-chain executives, industry experts, and leaders from around the world. Our efforts in global connections are long-term investment and commitment and your feedback is welcome.”

With the improvement of living standards over recent years, China has become a huge and lucrative consumer market and access to this dynamic global fresh produce marketplace symbolizes success.

Jason Hafemeister, Acting Deputy Undersecretary for Farm and Foreign Agricultural Affairs at the US Department of Agriculture, could not agree more: “The US shows great interest in China as its trading partner. Despite the fact that producers in the fruit and vegetable sectors need to overcome barriers to find partners, China remains a priority for us as its trade partner.”

Apart from the US, representatives from Chile and Australia all expressed their ongoing interest in the Chinese market. As Cesar Suarez, Trade Commissioner at the Commercial Office of Chile in Shanghai, pointed out, Chile is a Southern Hemisphere country that is geographically opposite China and enjoys a natural environment that serves as a natural screen and provides protection against plant diseases and pests. Furthermore, many varieties of Chilean fruits have benefited from zero tariffs under the free-trade agreement (FTA) with China. All of these factors helped Chile to become the #1 exporter of fruits to China in 2016.

Similar to the natural geographical advantages mentioned by Mr. Suarez, Brent Moore, Trade Commissioner and Commercial Consul at the Australian Consulate-General in Shanghai, described how Australia, another Southern Hemisphere country, also enjoys good climate and weather, a counter-seasonal advantage, and an FTA with China. He also told attendees how Australian fruit has been welcomed on the Chinese market as a result of its high quality. Australia intends to export more table grapes, citrus, mangos, and nectarines, and other produce to China.

In 2016, China imported 3.6 million tons of fruit and fruit exports hit 3.92 million tons, with a combined value of over 10 billion USD, just under the grain/oil and meat sectors. With a huge market potential and preferential trade policies, the exports will help to support the domestic supply to meet consumer demand, according to Chao Junwen, General Secretary, China Chamber of Commerce of Import&Export of Fruit-CFNA.

PMA Chinese market representative Mabel Zhuang was next to introduce the general situation of the Chinese imported market. She discussed the status quo of imports in the fresh produce market, the predicted future trends in the industry, and her insights into changes in China’s fresh food trade structure, considering a combination of domestic production, trade statistics, new marketing channels, and other data.

As the event proceeded, speeches and panel discussions were categorized into six themed sessions to allow participants to share their views and engage in brainstorming regarding the dynamic produce sector, which has seen dramatic changes during the past few years.

The most amazing factor has been the development of e-commerce, as increasing numbers of Chinese consumers tend to buy branded imported and domestic food via a variety of online platforms. As He Chunlei, CEO of Tmall Fresh of Alibaba Group, pointed out, Chinese consumers tend to spend more on higher-priced products and value brands that deliver safe, reliable, and quality foods. Moreover, this permits brands easier access to consumers without the usual barriers of distribution challenges, and as a result Tmall Fresh allows even small brands to compete in the marketplace and reach a massive audience.

Meanwhile, George Liu, CEO of Frutacloud, agreed by saying that compared to the traditional way of shopping preferred by the old generation, which focuses more on the appearance of goods and buying on impulse, the younger generation of online shoppers are able to make their choices based on an array of information, which means it is critical for brands to get their message across to consumers, such as creative stories about brand history, the uniqueness of their products, and even the brand’s Chinese name and logo design.

Mr. Liu added, “Apart from that, new ways of marketing such as WeChat campaigns and live broadcasting of KOLs（key opinion leaders）have become more popular. And it is quite easy for audiences to watch those broadcasting on their cellphones, making it an effective marketing method to get audiences’ attention.”

“As a specialty supermarket, City Super brings in only the best products from around the world, and focuses on differentiated goods and services that help our accurately targeted consumers enjoy a creative shopping experience and improve living standards,” Ms. Huang said.

Smaller supermarkets like City Super as well as mini-marts and specialty stores have continued to grow in recent years, while the hypermarket sector has slowed down in China. This requires retailers to modify their sourcing models to cater to new types of retail formats.

Peter Zhu, General Manager of the Commodity Center of Shenzhen Pagoda Orchard Industry Development Co., Ltd., gave an example of how Pagoda has been trying to adapt. He explained that despite the fact that Pagoda has been expanding its direct global sourcing of high-quality imported fruits since 2013, thanks to relaxed quarantine and inspection regulations and more varieties achieving access to the Chinese market, Pagoda has still suffered from a development bottleneck.

Mr. Zhu explained, “Before there was a unified sourcing standard. But now we hope to source products that are up to our special requirements and standards and this has become a challenge to us without the support of fruit producers. But it needs time for more negotiations and discussions so that comprehension is reached between the two sides.”

He also said that more new varieties such as those from Israel, South Africa, and the US are high on his sourcing list. Nevertheless, with more varieties to choose from, Chinese consumers are worried about food scandals and counterfeit products to such an extent that it creates serious concerns about food safety and brand reputation.

As Elliot Grant, Senior Product Manager of Google X, said, “‘Where is my food from’ has been a huge concern.” This calls for the birth of new technology to help shake off burdens and regain the trust of consumers that can be “hard to get but easily lost”.

He then introduced new traceability technology for products, which enhances food transparency to give consumers more access to agricultural information than only basic parameters such as pesticide residues. Labels with special bar codes or QR codes can then be added to products, so that consumers can trace this information. He added that more new technologies such as blockchain technology, DNA-based traceability technology, and hyperspectral imaging could be used to help establish global food safety standards in the future.

With the hope of global standards for safe and healthy food being born in the future, more varieties of fruits can be enjoyed by consumers. However, this poses a new challenge to fruit producers: to innovate products to cater to the ever-increasing demand.

International experts expressed their own opinions on this point during the fruit innovation forum. Jose Antonio Gomez, CEO of Camposol Trading, considers new technology the keyword for higher yields of better quality products. He shared with the audience the success story of Peru’s avocado exports to China, citing the 87% increase of imports of avocadoes from 2011–2016, which were initially regarded as “a strange fruit” by Chinese consumers.

Meanwhile, Mimi Corsaro Dorsey, VP Marketing & Director of Export Sales, Giumarra Vineyards Corporation, explained how she considers innovation, technology, and branding crucial to success for American grapes on the world market. “We emphasize our products to be creatures of Mother Nature and bred by natural selection only, with no GMO involved at all. With innovation and sustainability as buzz words, we try to compete in the market.”

For David Smith, Business Development Manager of SVA Fruits, the preferences of consumers, and hence the market feedback, are what really matters. He explained how consumer choices can directly influence the breeding programs to produce products with the right sweetness and crunchiness to cater to the market demand.

Putting the produce sector in a broader world arena with an increasingly complex political background, such as Brexit and Donald Trump’s triumph in the American presidential election, the second forum of PMA Fresh Connections: China invited experts to analyze how Asia-Pacific countries could be affected in this changing global landscape.

Vladimir Kocerha, Economic and Commercial Counselor of Peru in Shanghai, pointed out that despite the fact that challenging political events have taken place, he believes all nations still can and should enjoy free trade and its benefits. Mr. Kocerha said that as China, the US, and Europe are big markets for Peru, Peru wants to open up and share with them and keep developing and emerging markets with potential power in the sophisticated produce sector.

Meanwhile, Robert A. Theleen, Chairman & CEO of ChinaVest Ltd., said that despite the failure of the Trans-Pacific Partnership (TPP), more bilateral and multilateral trade agreements will be born to enhance international trade. He reviewed China’s development from a vertical society to a horizontal society in recent years. He also cited the dramatic changes that have taken place in China, such as city infrastructure construction, WTO entry, and its benefits as well as government functional changes.

Mr. Theleen said that more Chinese consumers with a good educational background are pursuing totally new lifestyles and trends. Only open, transparent, and responsible services can obtain the trust and loyalty of such consumers. This encourages entrepreneurs to be more creative and innovative. He pointed out, “Please remember the Chinese character wēijī (危机) means danger and opportunity co-exist.”

On this point, Xu Mingqi, Professor of the Shanghai Academy of Social Sciences, could not agree more. He said that, despite the exclusion of China in the TPP, so far China has formed FTAs with 11 countries and regions, such as Singapore, Australia, Chile, Pakistan, Peru, and Iceland. China continues to carry out an opening-up policy and through FTAs with business and trade partners around the world, it hopes to enhance international economic cooperation.

He concluded, “China enjoys a steady GDP growth of above 6.5% annually and the potential power of the consumer market is attracting more international trade partners, especially in the produce sector. With the continuing economic growth and living-standards improvement of consumers, China is expected to import more agricultural products globally, which includes fruits and vegetables.”

Jason Hafemeister, Acting Deputy Undersecretary for Farm and Foreign Agricultural Affairs at the US Department of Agriculture