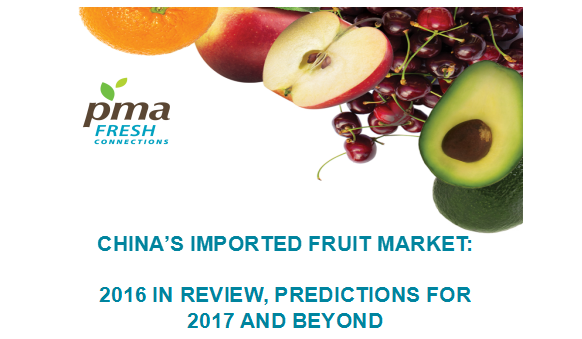 Wrapping up her presentation on China’s imported fruit market in 2016 at PMA Fresh Connections: China 2017, Ms. Mabel Zhuang, CEO of M.Z. Marketing Communications, PMA China Development Representative, and founder of Produce Report, recapped the major trends in China’s imported fruit market for 2016 and delivered key insights into potential trends and predictions for 2017 and the near future.

2016 was a turbulent year for fresh produce e-commerce retailers and witnessed the rise, fall, and merger of several big players in the market. In April 2016, Amazon-backed yummy77.com filed for bankruptcy, essentially leaving Alibaba and JD as the two major fresh e-commerce platforms in China. Alibaba’s yiguo.com fresh e-commerce platform saw total investment of $500 million in 2015, Tencent-backed missfresh.cn received $100 million from several sources, and benlai.com acquired $117 million in financing from multiple investors. China’s largest fresh fruit retailer, Pagoda, also acquired C2B and O2O fresh e-commerce platform 1mxian.com in a merger, with Pagoda aiming to expand their e-commerce operations and gain 1mxian.com’s younger (18-25) clientele base. Further restructuring of fresh e-commerce is expected for 2017, with acquisitions, mergers, consolidations, and an overall cooling off of investment to keep fresh retail e-commerce unpredictable. Wholesale markets look to remain the main distribution channel among fresh produce e-commerce retailers for now; however, retailers’ direct sourcing is expected to accelerate in 2017 and the near future.

Ms. Zhuang also noted that 2016 witnessed continued improvements in the field of produce logistics and distribution. Charter flights showed no signs of slowing down, buoyed by expanded usage by the United States and Chile, who are effectively utilizing these flights to preserve the quality of their cherry exports to China. At its peak in July, 400 tons of cherries from the United States were being delivered via air to Shanghai daily, and Chile recorded at least one aerial shipment of its cherries to Zhengzhou and Shanghai every day early in the season. More and more entry ports are opening up to foreign exporters, with Zhengzhou becoming a significant fresh produce port and distribution centre in 2016 and airports in Hefei, Jinan, and Chengdu being designated ports for fresh fruit imports in 2016 and 2017.

Market access for fresh fruit in China continued to expand in 2016 as 17 new categories of fruit were allowed access to China’s market, including 7 products from 4 countries which had never before been given permission to export to China: these included cherries from Turkey, apples from Poland, watermelon and bananas from Laos, and oranges, lemons, and tangerines from Nepal1. 4 new varieties of fresh fruit have signed the protocol with China in early 2017, namely, grapes from Argentina and Egypt, blueberries from Mexico, and Pineapples from Costa Rica, with more to follow throughout the year.

Accompanying this increasing market access was a number of major branding campaigns which were carried out throughout 2016. Foreign companies are investing more and more in getting their brands recognized in China, as effective branding has become a crucial element in appealing to the increasingly-discerning and savvy Chinese consumer. Ms. Zhuang provided examples of major branding and advertising campaigns carried out in 2016 in China by foreign exporters, such as those for Chilean cherries, Australian nectarines, Californian strawberries, and Italian kiwifruit. The activities of these campaigns ranged from media launch events and in-store promotional activities to participation in Chinese trade shows, conferences, and roundtables and highly-publicized online and offline advertising campaigns. China’s own fresh produce growers, distributors, and exporters are also expanding their operations and investing in brand building and market penetration in international markets, which Beijing itself has stated is a major government priority for 2017.