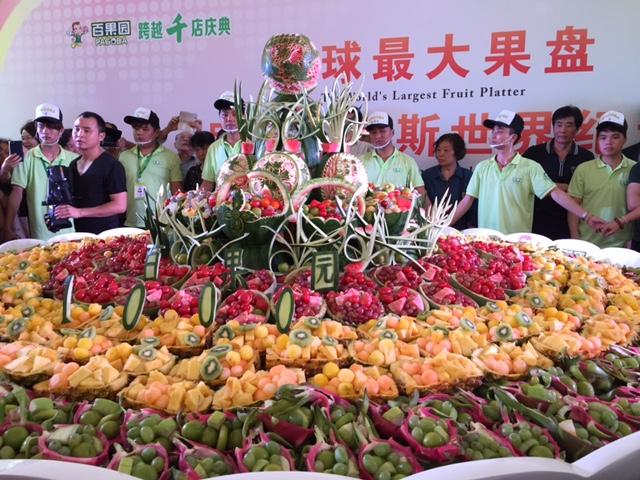 Pagoda, the fruit shop chain pioneer, opened its 1000th shop in Shanghai and has created the world’s largest fruit plate to celebrate this milestone.

Ms. Xu Yanlin, Pagoda’s general manager, unveiled the 3-metre wide fruit plate, which took five hours to construct and weighs in at a total of 1788 kg; the 3D printed plate alone weighs more than 500kg and is decorated with 87 different kinds of fruit. Pagoda has stated it plans to apply for the Guinness Record for the “World’s Largest Fruit Plate.” Attending the ceremony and following festivities were numerous invited guests, including Goodfarmer, T&G, and Pro-Mexico. Mr. Lu Fangxiao, the vice president of the China Fruit Marketing Association, gave the welcoming address, congratulating Pagoda on the opening of the store.

Pagoda’s history can be traced back to 2001, when it began operations as the first specialized fruit shop chain of its kind in China. From its humble beginnings in 2002 when it opened the doors of its first store, Pagoda now possesses the largest number of chain fruit stores not only in China, but worldwide as well. The chairman of Pagoda, Mr. Yu Huiyong, told the audience that the 1000th store opening was not only a significant milestone, but also represented a new start for the company. Pagoda plans to open its 3000th shop within the next 3 years and will celebrate this occasion in Beijing. Mr. Yu also mentioned that Pagoda’s long-term goal is the opening of 10,000 outlet locations all over the world, becoming the largest fruit company worldwide but at the same time not losing sight of its mission to ‘let everyone enjoy fruit and enjoy life.’

At the site of its 1000th store, located in an affluent community in Shanghai, we found more than 100 kinds of fruit on display. The store manager informed Produce Report that half of its available fruits are imported and the rest are domestically-produced. Mr. Hong, the manager of Pagoda’s International Procurement Department, added that all fruits are handpicked and meet Pagoda’s high, self-imposed standards which include strict control of levels of brix (sugar content), acidity, freshness, crispness, tenderness, fragrance, and general food safety. Pagoda maintains firm product quality control and competes with other rivals on the market through its exclusive dealings with suppliers and by nurturing the development of its in house brands. Pagoda offers customers over 10 different varieties of apples from various regions. While imported fruits in China are generally more expensive than their domestically-produced counterparts, Pagoda private-label Chinese Fuji apples are sold at a higher price than that of New Zealand Red Rose apples due to the former’s unique, juicy flavor.

The store additionally offers online purchases and free delivery throughout the neighborhood. The store manager also introduced us to their unique return policy, the “Three Withouts,” whereby customers who are unsatisfied with the purchase of Pagoda products are offered compensation or refunds, even if the customer is lacking a receipt, any other proof of purchase, or even a reason for returning the product in general. This demonstrates not only Pagoda’s trust in its consumers, but also the confidence it has in the quality of its own products.

A video of international and Chinese industry leaders congratulating Pagoda on the opening of its 1000th store can be viewed here.