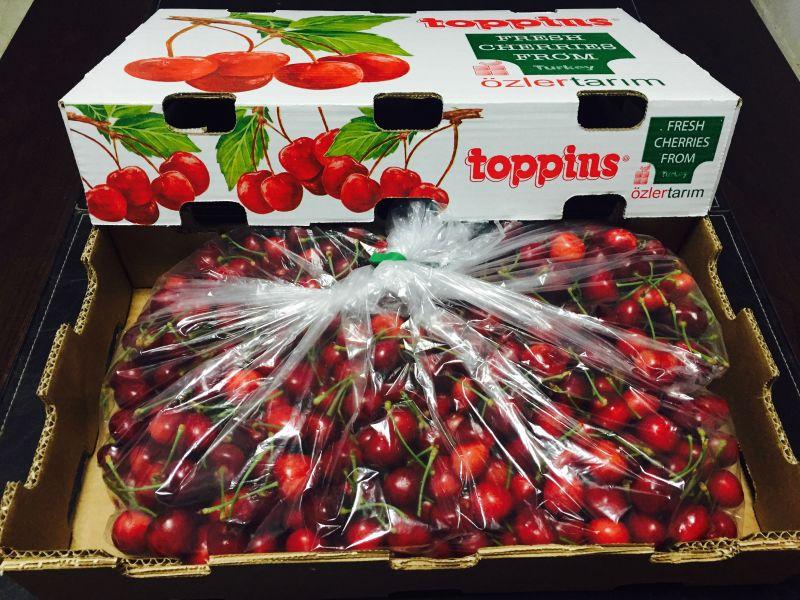 Recently, Produce Report invited Mr. Egemen to give an online lecture about Turkish cherries and citrus. He is currently responsible for the sales and marketing activities of Ozler Tarim Company, which is the largest grower in Turkey, producing 25,000 tons of citrus and around 500 tons of its own cherries.

According to Mr. Egemen, despite the recent political turbulence in Turkey, trade has not been significantly affected. Turkey has already signed an admission protocol with China for cherries but will not export cherries to China this year, due to some divergence of opinion on the details of the cold treatment. Turkey has currently been successfully exporting some varieties of fruits to Hong Kong and from there to Guangdong market, though the expenses are fairly high. So far, Turkish cherries are mainly transported to China by air, as they are not suitable for long-distance shipment. Just this year, Turkey invited some Chinese importers to visit, hoping to have the chance to export cherries to China next year.

Turkey is the world leader in cherry production. The total production in 2014 was 445,000 tons and that in 2015 was 520,000 metric tons.
In terms of exports, Turkey is the third largest exporter of fresh cherries after the USA and Chile. The total export volume in 2015 was 68,000 metric tons. The remainder of the production is consumed by the local market as fresh produce, in the canning and juicing industry, or as sour cherries. The largest export markets for Turkish cherries are Russia, Germany, and Iraq. Turkey has around 50 days of harvest, with the first cherries starting in the Kemalpasa–Izmir region and then following the Manisa, Salihli, Isparta, Afyon, and Pozantı regions.

The main variety of cherries exported from Turkey is the Ziraat 900. This variety is also referred to as Napoleon in many markets and can be described as:

The cherry season typically starts around the end of May to the beginning of June. The typical calibers of Turkish cherries are calibers 26 and 28+ (around 60%), while the remaining 30% is caliber 24+ and around 10% is caliber 30+. The packing depends on customer requirements, but in general they are packed as loose 5 kg net, punnets of 500 grams or 350 grams, or carry bags of 8 × 625 grams.

Turkey is the eighth largest citrus grower in the world. In 2014, the total citrus production was 3,783,517 tons and in 2015 the total production was 3,805,696 tons. Turkey is the fifth biggest exporter of citrus fruits after China and South Africa, with a 2015 export volume of around 1,100,000 metric tons. The rest of the volume produced is consumed as fresh produce in the local market and in the juicing industry. The largest export markets are Russia, the EU, and others. Turkey’s citrus production is distributed as:

Citrus in Turkey is produced along the Mediterranean Sea, from Izmir in the west to Hatay in the south-east. From August to March, the fresh harvest of several citrus varieties is possible in Turkey. The main lemon varieties in Turkey are Meyer, Interdonato, Lamas, Eureka and Lisbon. Meyer is generally consumed in the local market due to its thin peel and juicy taste, which make it not very suitable for long transit times. Interdonato is the most popular choice for exporting, for it has a very smooth and strong peel, and thus very suitable for long transits.

The main grapefruit varieties in Turkey are Star Ruby, Rio Red, Ruby Red, and White Marsh. The season starts in September and continues until April. The typical calibers produced are 32, 35, 40, 45, and 50. The orange season starts in Turkey in October and continues until the end of February. The main orange varieties are W. Navel, Valencia, Spring Navel, and Cara Cara. The mandarin season in Turkey is from October until February, and the main mandarin varieties are Satsuma, Nova, W. Murcott, Okitsu, and Miho Wase.