Interpoma China: a new meeting point for the apple industry in Asia 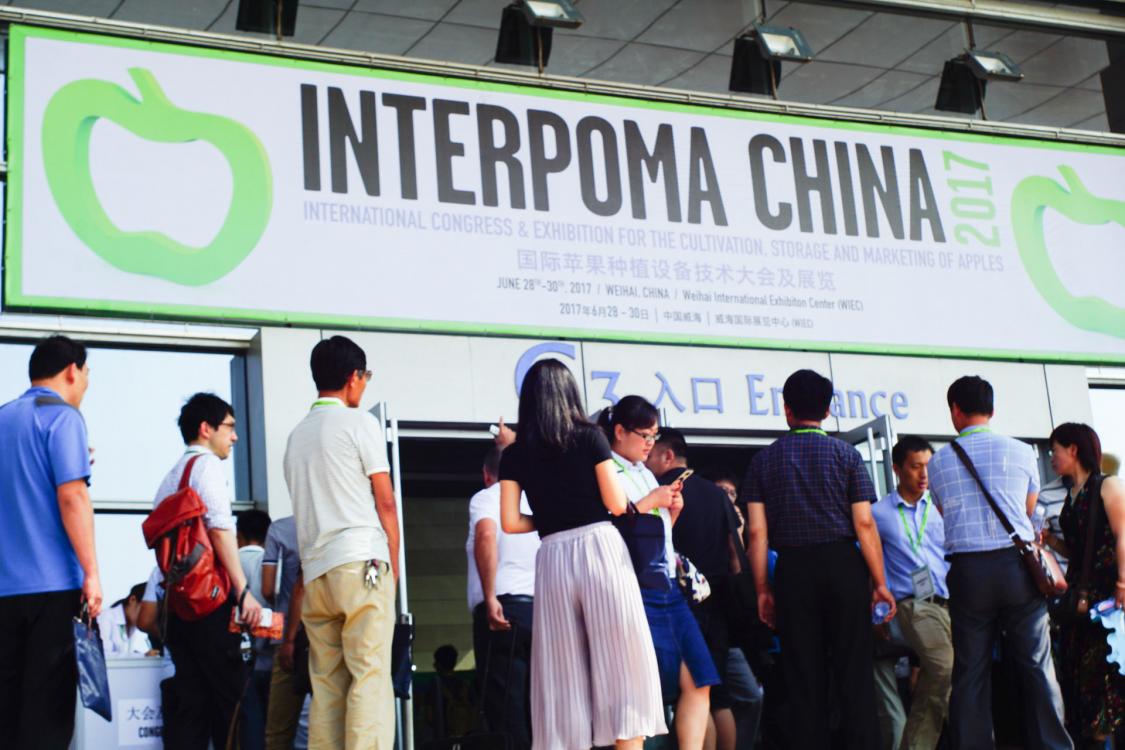 Bolzano, 10th of July 2017 – The first Interpoma China has been a success, offering the international exhibitors that followed Interpoma in this new adventure the opportunity to familiarize themselves with the Chinese market. “The first Interpoma China is an important step in finding out more about the world’s largest apple market and in forging new contacts in the Chinese market. This presence in China has raised the networking importance of the parent Interpoma event in Bolzano as the most important forum of the apple-growing economy”, explains Thomas Mur, Director of Fiera Bolzano.

Interpoma China was organized as a conference and exhibition on the cultivation, storage and marketing of apples. Two thousand visitors were able to enjoy what was on offer from 70 companies in an exhibition space covering 5,000 square meters, half from China itself and half from nine other countries: Belgium, Chile, France, Germany, Iceland, Italy, Israel, Korea and the Netherlands.

The International Congress “China and the Apple in the World” took place alongside the exhibition, in the mornings from June 28 to 30, 2017, and looked at topics relevant to the apple industry’s situation throughout the world and in China, at different techniques from nurseries to apple processing plants, and at the reduction of costs and improvement of process efficiency.

Dutchman Eric van der Hoeff, from the consultancy Fruitconsult, attended the international congress as a speaker. He explained that there are no general rules for irrigation, fertilization and soil management but every situation has to be analyzed individually. He felt that, “Interpoma China is the first step in the development of a very large event, not least because of the high levels of interest and satisfaction shown by the companies present. In China it is evident that fruit-growing is a very lively sector and when Interpoma China is more widely known, it is bound to grow”.

German Helwig Schwartau, from the Agricultural Market Information Company (AMI) gave a talk on apple quality standards, market operations and consumer trends throughout the world. His time at the congress in China had made a big impression on him, and he was taking away many interesting facts: “China is responsible for more than half of global apple production and is certain to increase exports, but the key to future success is always to focus on product quality. Holding an exhibition in an important fruit-growing area is undoubtedly a great opportunity. It is difficult at the start but, judging by the talks we have had in the last few days, I am sure it will become an interesting platform and that more representatives from other countries will attend, increasing the platform’s international dimension”.

Three Interpoma China Tours were also organized during Interpoma China to give exhibitors and visitors the chance to visit apple-growing areas near Weihai and to understand more about the processes and potential development of apple production in China. The tours showed the visitors some modern nurseries and orchards in the Lingang district of Weihai, as well as storage centers and storage equipment based on traditional Chinese apple-growing methods, at the Weihai Economic and Technological Development Zone.

The international exhibitors expressed satisfaction with this first event.

Federico Donega, from the company Carraro Tractors, wrote: “In the hundreds of exhibitions we have attended or visited, I personally have never seen such a perfect equation: level of exhibitors, visitors’ interest, fit with the end users’ market, size of the site, openly available market data information, tours to orchards, easy access to institutions, media coverage … All went perfect and delivered great end precious value to those, like us, who want to contribute to the progress of healthy and efficient agriculture, in China and wherever in the world.”.

Nils Jonson, from Revò, commented, “We are in China, the country of infinite opportunities, and it seems to be exactly that. We therefore recommend that everyone should come to the next Interpoma China”.

The Chinese companies and local partners present have great expectations for the event’s growth.

Liu Linxuan of the Haisheng Group said, “The first Interpoma China event has been a success and has opened up major business opportunities for us. The event has major growth potential and I am sure it will attract more professionals from the sector in terms of both exhibitors and visitors through ongoing brand promotion. I hope that Interpoma China becomes the event that no apple industry expert or operator will want to miss; the Haisheng Group will certainly be playing an active role here again next year”.

According to Zhu Danpu of Ying Juyuan Agriculture Sci & Tech, “The first Interpoma China event was well organized and has had a considerable impact on the industry. I am expecting to tie up some good business deals in its wake”.

Local institutions and media showed great interest in this new event. The visit of Zhang Hui, Mayor of Weihai (a city with a population of 2.8 million) was a big honor and an important step for the future growth of Interpoma China, especially because of her strong interest in the technological developments in the apple sector.

The presence and contribution of local partners such as the Apple Industry Association of Weihai (AIAW), Weihai Municipal Agricultural Bureau, China Council for the Promotion of International Trade Weihai, Weihai Municipal Human Resources and Social Security Bureau and Weihai News Group underlines the interest in Interpoma China, which was organized through close cooperation with MMSH Messe München Shanghai and Qingdao Agricultural University.