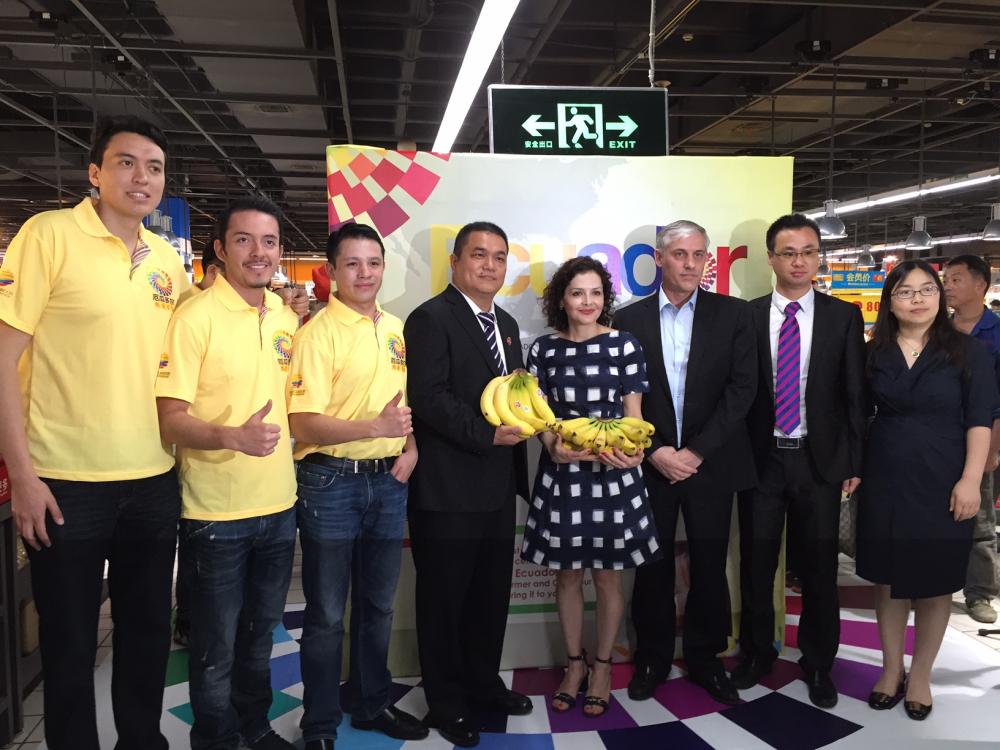 This year’s Ecuadorian Bananas Promotion Week kicked off on May 23rd in Shanghai at the Gubei Carrefour branch in joint collaboration between Goodfarmer and the Consulate General of Ecuador in Shanghai and Guangzhou, representing the start of the second session of Ecuadorian Bananas Promotion Week activities in China. Last year’s first week-long session met with great success in Guangzhou.

Karina Morales Herrera, the Consul General of Ecuador to Shanghai, enlightened the audience as to the “superior quality” of Ecuadorian bananas, a result of more than 100 years of experience in banana cultivation. She also made known the fact that “Ecuador has become world’s number one exporter of bananas,” possessing a market share of over 30%.

“Our high-tech banana plantations are certified with international standards of quality, safety, and social responsibility.”

According to Karina, the slogan “Ecuador Love Life” is meant to convey the notion that bananas are grown by a happy people, and as such, are intended to bring happiness to the Chinese consumer.

Global Ecuadorian banana exports in 2014 totaled 5,787,073.17 metric tons, with China representing 5.16% of this figure, according to the Central Bank of Ecuador.

According to China Customs, in 2014 Ecuadorian bananas experienced a surge in China, increasing more than 828% in value as compared to 2013. Similarly, Ecuadorian banana import volume substantially increased in the first four months in 2015, with a year-over-year growth rate of 302%.

As Ecuador aims to surpass the Philippines in becoming the largest exporter of bananas to China, Goodfarmer has successfully managed to become the lead Chinese domestic importer of Ecuadorian bananas after only three years.

“We have important partners in Ecuador who reliably send banana shipments every week, allowing us to offer our clients in China consistent quality,” Mr. Liu Zhijie, President of Goodfarmer, told Produce Report in a later interview.

The delivery time of Ecuadorian bananas to China is approximately 35 to 40 days; however, this does not adversely affect banana quality, as they are shipped green and will be ripened in China, according to Liu.

Pean Didier, the store manager of Carrefour, said bananas are one of the most important produce items in Carrefour, and underlined Carrefour’s full support for future activities.

According to the Commercial Section of the Consulate General of Ecuador in Shanghai, this event is expected to also be held in Hangzhou and Nanjing. In addition to Carrefour, other retailers such as Walmart, Auchan, and Metro will also be involved.

This second iteration of the Ecuadorian Bananas Promotion Week in China aims to increase brand awareness concerning Ecuadorian bananas by emphasizing both Goodfarmer’s aim in “making available the world's best bananas to the Chinese consumer," as well as in educating consumers as to the nutritional benefits of bananas.

This campaign was possible thanks to the cooperation between Goodfarmer and PROECUADOR (the Commercial Section of the Consulate General of Ecuador) Shanghai and Guangzhou.