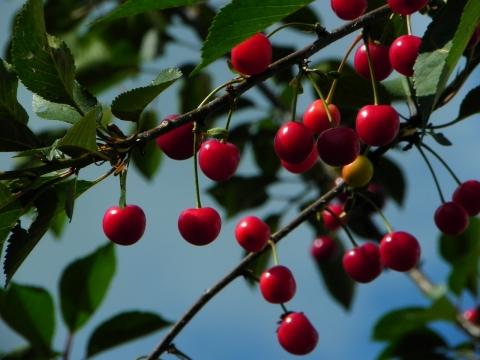 May is the peak selling season for Chinese cherries. Hence, cherries have become the center of attention in the market, also partly caused by the growing popularity of imported cherries. There is a lot of cherry producing areas in China. The many variants differ significantly in price, ranging from below RMB40.0 to almost RMB200.0 per kilogram. This article will introduce the various cherry producing areas in the country.

Cherries were first brought into China in the 19th century. Yantai City of Shandong Province was the first area to produce the fruit. 140 years later, cherry growing areas have spread across the whole country with 3.0 million mu (亩, 494,211 acres) of cherry orchards, producing a wide variety of cherries including Brooks, Bing, Sweetheart, Rainier, and Lapin. Total harvest is about 1.2 million tons, making China the world’s largest producer of cherries in terms of total orchard acreage and volume. Bohai Bay area, Lanzhou-Lianyungang Railway region, and the Southwest and Northwest highlands are the three major production areas.  At the same time, China is the largest cherry importing country. Last year, China imported 186,000 tons of cherries from Chile and other countries. The total value of imported cherries amounted to RMB9.0 billion (USD1.3 billion).

Shandong Province is the largest cherry production area in China. It is part of the Bohai Bay area. Yantai City has been most famous since the first cherry trees were planted there in 1871. Its orchard acreage and production volume accounted for 21% and 40% of the country total respectively. Yantai’s climatic and soil conditions are suitable for producing early, middle and late harvest varieties. Cherries have become the second largest fruit crop of Yantai, behind apples. Yantai cherry’s brand value has been estimated to worth RMB4.758 billion (USD689.1 million), number one among all cherries and 11th among all fruit brands. Fushan area is the most famous cherry producing area within Yantai City. Its 110,000 mu (18,121 acres) of orchards, produce 80,000 tons of cherries with a value of RMB1.0 billion (USD144.8 million). Within Shangdong Province, the cities of Pingdu, Yingnan, Linyi, Feixian, Zaozhuang, Laiwu, and Taian, as well as Pingyi and Tengxian counties are also important cherry growing areas.

Cherry orchards have developed very rapidly in Shaanxi Province in recent years. The province is now among the three largest cherry growing areas in China. It belongs to the Lanzhou-Lianyungang Railway region and has 360,000 mu (59,305 acres) of orchards, including a small area for sour cherries. The orchards are more concentrated in the cities of Xi’an, Baoji and Tongchuan. Tongchuan is most famous and has received special national awards repeatedly. It has 35,000 mu (5,766 acres) of orchards, producing 15,000 tons of cherries with a value of over RMB350 million (USD50.7 million).

The highlands in Southwest and Northwest of China also produce good quality cherries. Sichuan Province’s Wenchuan area produces a rare variant of highland cherry. In 2009, it was conferred with the preserved agricultural geography status. Its over 10,000 mu (1,647 acres) of orchards cannot produce enough to meet the local demand. Qinzhou in Gansu Province is another award-winning cherry production area with 77,000 mu (12,684 acres) of orchards, about half of it with crops that can be harvested, yielding 20,000 tons of cherries, worth more than RMB360 million (USD52.1 million).