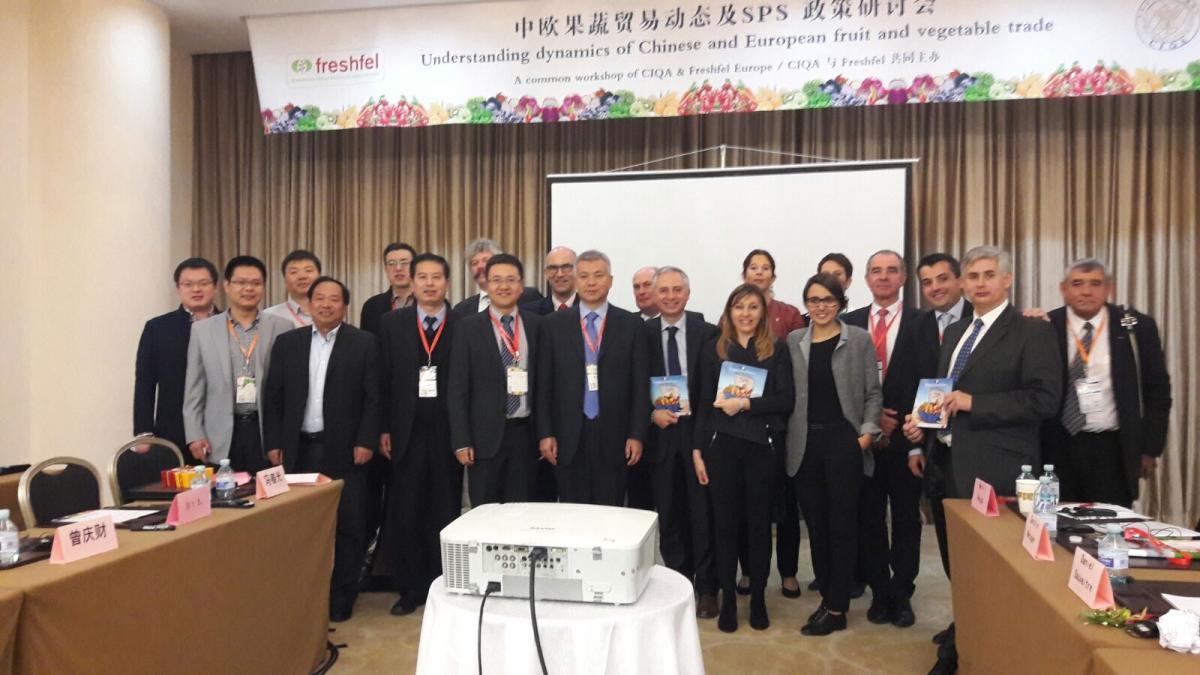 The EU delegation included officials from the government, embassy officials, industry associations, and business representatives, as well as experts in the fruit and vegetable trade, including those from Belgian Fruit Valley, CSO, Unia Owocowa, Baywa, and Interfel. The seminar was co-chaired by Mr. Feng Chunguang from CIQA and Ms. Nelli Hajdu from the Freshfel Association of the EU.

Ge Zhirong, President of CIQA, and Philippe Binard, President of Freshfel, delivered the opening remarks. According to Ge Zhirong, “The EU is China’s largest trading partner, China is the EU’s second largest trading partner, and bilateral trade volume reached 568.55 billion USD in 2015. However, the bilateral agricultural trade, especially fruits and vegetables, is still at a low level. According to statistics, in 2015 China imported 19,000 tons of fruit from Italy, France, Spain, and seven other European countries, less than 0.5% of China’s total imports of fruits. China’s fruit exports to the EU amounted to 75,000 tons, accounting for about 3% of total exports. In the future, the fruit and vegetable trade between China and Europe has great potential for development.” Market access, phytosanitary policies and the relevant requirements, food safety policies and the relevant requirements, and the specific procedures for the various products were the four essential pillars that were discussed between the two parties.

At the seminar, Italian delegates gave a presentation on Italy's fruit trade and the impact of the “Freshness from Europe” promotional campaign on China. They elaborated upon their key goals of strengthening the Italian kiwifruit in the Chinese market, exploring the future of Italian citrus fruit exports to China, investigating various transport modes, and bringing Italian apples and pears to the Chinese market via arranging negotiations as soon as possible. “Freshness from Europe” is a three-year project financed by the EU, the Italian Government, and CSO, together with its members, Alegra, Apofruit, Assomela, Ceradini, Cico, Conserve Italia, Made in Blu, Origine, and Oranfrizer. The project, which will continue until 2018, has the goal of promoting and showcasing quality fruit and vegetable products grown in Europe.

Through these events, China and the EU have fully exchanged their views on issues of mutual concern in the context of mutual respect and shared their knowledge and experience, while strengthening trust between the two sides and laying a solid foundation for further cooperation.