Blue Whale Apple Exports to China to Double Next Season 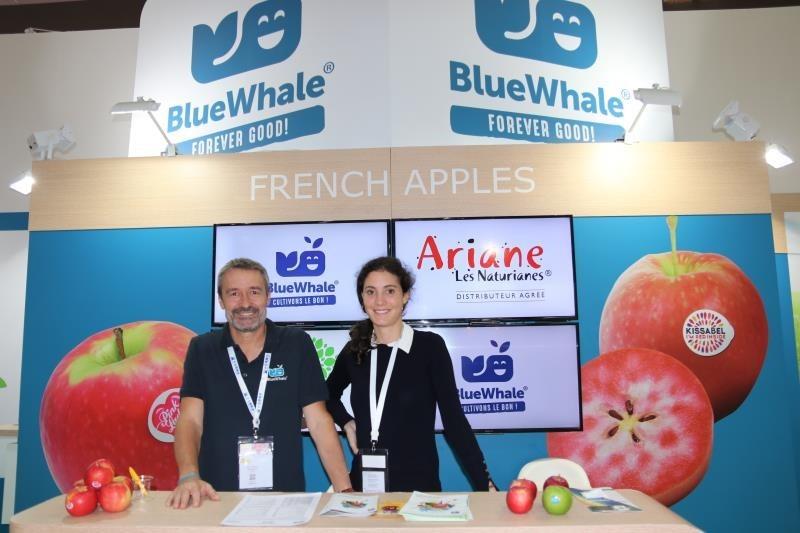 From September 4 to 6, Asia Fruit Logistica 2019 took place as scheduled at AsiaWorld-Expo in Hong Kong. Produce Report caught up with Thierry Hérisson, Asia Export Manager, and Marguerite Jeanson, Asia Trade Marketing Executive, for French apple grower and exporter Blue Whale to talk about the company, expectations for the current and following seasons, and the future of Blue Whale apples in China.

Founded in 1969 by a group of French fruit growers as a means to pool resources to grow and commercialize French apples, Blue Whale celebrated its 50th anniversary of exporting apples to markets outside Europe this year. Comprising more than 300 growers across 5,000 hectares of orchards exporting 240,000 tonnes of fruit to 70 countries, Blue Whale produces plums, pears, kiwi, and grapes, but at the centre of its operations is apples, of which it grows 19 different varieties and which accounts for over 90% of the company’s total fruit production.

Although French apples have enjoyed market access in China for a number of years, their overall share of the market has been relatively small, primarily due to the high, non-competitive price of their apples and the dominance of the U.S. in China’s imported apple market. According to Mr. Hérisson however, with American apples now subject to significant tariffs, a result of the ongoing U.S.-China trade war, there has been much more interest in French apples among Chinese importers, both from customers with whom they have been working with in past seasons as well as new potential partners.

Ms. Jeanson also stressed that there are several other signs that the time is right for increased investment in the China market. China’s middle class continues to grow, and with this growth comes an increased appetite for premium imported fruit. Chinese consumers and distributors have also been accustomed to American apples for many years, especially Red Delicious. Higher tariffs on apples from the U.S. has reduced their export to China and left a hole in the market just waiting to be filled by other countries.

Furthermore, the global apple trend is currently shifting away from Red Delicious and to other varieties such as Royal Gala, of which Blue Whale is a major exporter. Although some other varieties exported by Blue Whale to China do not perfectly align with the preferences of Chinese consumers, such as Granny Smith and Pink Lady which are less sweet and more tart/sour, Ms. Jeanson underlined that given the enormous size of its market, it was still worth it to export these varieties of apples to China.

Even so, Blue Whale is paying close attention to Chinese consumer preferences and has specially developed the Novablue and Candine varieties of apples in response to both Asian and Chinese tastes. Novablue is a premium gala cultivated exclusively in France by Blue Whale, and Candine is another new exclusive variety of Blue Whale. Candine is a cross between Ariane and Fuji that is red-blushed, white-fleshed, sweet (minimum Brix of 14°), and crunchy. Mr. Hérisson told Produce Report that Blue Whale produced 100 tons of Candine last season and is expecting to ship 30 to 40 containers of the apple globally this season.

Blue Whale has benefited from these shifting winds and emerging trends: its apple exports to China doubled last season to 220 containers, which the company forecasts to double again this season to 450 containers. This season’s apple harvest commenced in France 2 to 3 weeks ago, and so far, the company is seeing higher production volumes than last year. Blue Whale apples have already begun their journey from France to China, the first shipment of which is expected to arrive in ports across southern China and Shanghai in late September to early October. Ms. Jeanson informed Produce Report that the company has an event planned at Shanghai’s Huizhan Fruit and Vegetable Market on the morning of October 17th to welcome and promote the first containers of Novablue arriving in China.