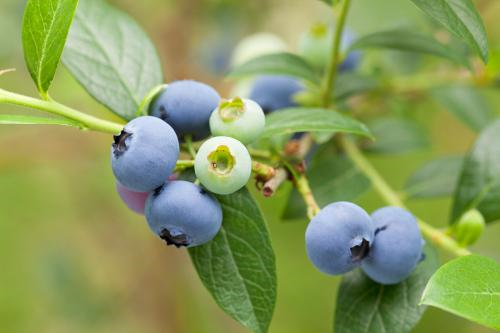 Greenhouse and cold shed cultivation (frames mounted with thin plastic sheets) are the two methods used for growing blueberries in China. In 2017, blueberry farms using greenhouse method accounted for 1,10 hectares of growing area, yielding 8,520 tons of production. Out of these, 400 hectares are in Liaoning, with a production of 3,000 tons. Shangdong (300 hectares, 2,000 tons) ranks second and Tianjin Municipality (200 hectares, 1,500 tons) ranked third. On the other hand, Liaodong and Jiaodong peninsulas use cold shed cultivation. Using this method, the berries would take 15 to 20 days less to ripen. This increases yield. Cold shed cultivation has the relative advantage of preventing the trees from bearing too many fruits which hence would become under nourished while the trunks weaken and become fragile. Particularly the blueberry trees would be 2 meters tall during their mature production period. Putting mud onto shelters to protect them from low temperature could be very difficult to manage. All these have led to the increasing adoption of this cultivation method in the last 5 years. By 2017, the total growing area using cold shed cultivation reached 1,315 hectares, giving a production of 8,520 tons. In cold shed cultivation, Shandong leads the rest of the peck, accounting for 75% of the total blueberry growing area and 82% of production.