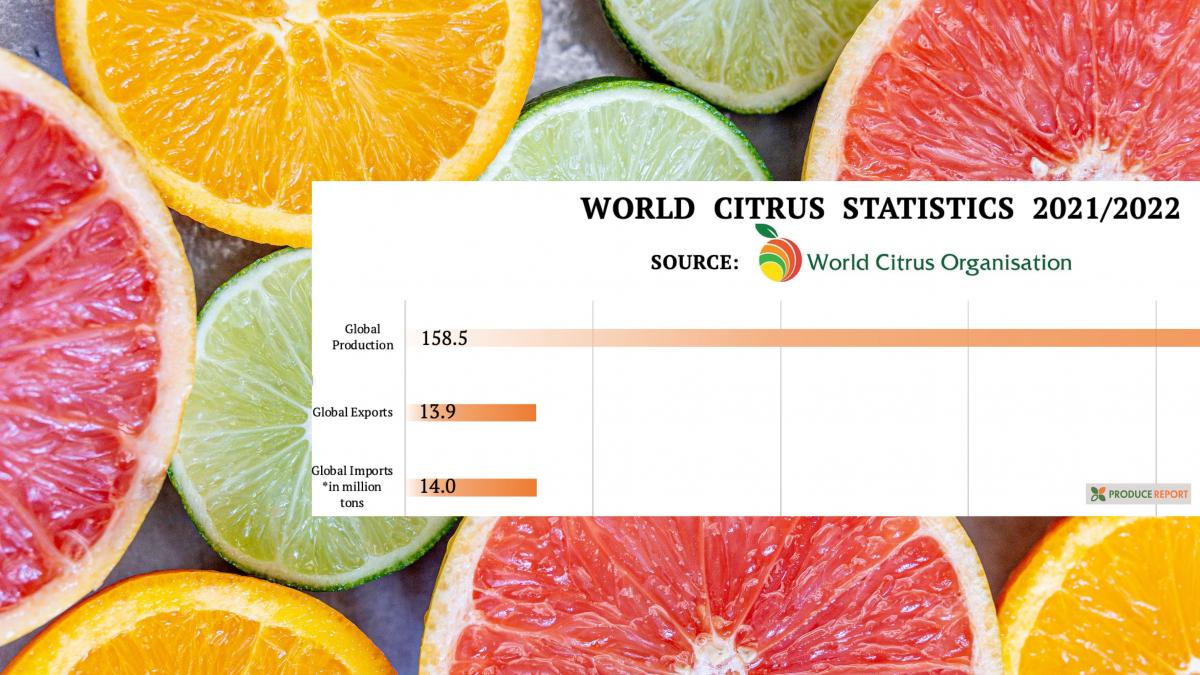 The World Citrus Organization (WCO) this month released a comprehensive report covering global citrus data for the period of summer 2021 to winter 2021/22. The report presents extensive statistics on various aspects of the global citrus industry, including production, exports, imports and consumption for total citrus products, as well as specific statistics for the most common varieties.

According to the WCO, the world’s citrus output reached 158.5 million metric tons during the summer 2021 and winter 2021/22 citrus seasons. China leads the world’s production with its volumes amounting to 44.6 million metric tons and accounting for 28% of the global output. It is followed by Brazil and India, with 12% and 9%, respectively.

While 51% of all citrus is produced in Asia, 52% of citrus exports originate from the Mediterranean region, with the lion’s share from Spain, South Africa, Turkey, and Egypt. China ranks fifth in global citrus exports, with its volumes standing at 918,000 metric tons and representing nearly 7% of the grand total. These figures suggest that China’s citrus production is mostly consumed domestically.

The WCO report shows a slight increase in global citrus imports, with the main exporters as the European Union, the UK, Norway and Switzerland. Together, European countries imported over 5.8 million metric tons of citrus, 42% of the global share. This trend is reflected in citrus consumption figures, with Scandinavia (14.5 kilograms) followed by France (13.5 kilograms) and Germany (12.8 kilograms) showing the highest citrus consumption per capita in 2021.

In orange production, China ceded the top position to Brazil and India by yielding 7.55 million metric tons, or about 10% of the global output. Chinese imports were the highest in Asia, reaching 520,955 metric tons, equivalent to half of Asia’s total import volume. Orange imports globally, however, were led by Europe, with its imports being five times the volume of China. The majority of global exports were registered in the Mediterranean countries, headed by Spain and Egypt.

Even though citrus imports slightly decreased in the dominant markets of Europe, as well as in Latin America, the rest of the world saw an increase in orange imports in comparison to the previous year.

China by far exceeds other countries in the world in mandarin production. China’s yield hit 27 million metric tons and accounted for 68% of the global output. China domestically consumed the majority its easy peelers, and exported only 673,000 metric tons. A modest import of 65,300 metric tons—up 37% up compared to 2020—was seen in China in 2021. As in the case of oranges, the Mediterranean region topped the world’s overall exports, with Europe ranking first as a final destination for imported fruit.

Global imports did not fluctuate significantly, with only the United States and Canada increasing imports to a notable degree—up 13% over the previous year.

Global lemon production was led by Argentina, Turkey and Spain, with China closing out the top six at 586,000 metric tons, equal to 6% of the world’s output. Global export and import forces remained the same: Mediterranean countries top the list of main exporters, while the main importers were on the European continent. Notably for China, in 2021, the country imported 22% more of lemons than a year before, with its imports reaching 52,232 metric tons.

Grapefruit is the citrus product with the lowest production worldwide. Of the only 2 million metric tons produced in 2021, the majority was concentrated in Mexico and the United States. South Africa surpassed other countries in exports, while import demand mainly originated from Europe and Asia, with China being Asia’s main importer and boosting its imports to 157,809 metric tons, a 40% spike in comparison to 2020.