Exclusive: Inside the 2018/19 Cherries from Chile Promotional Campaign 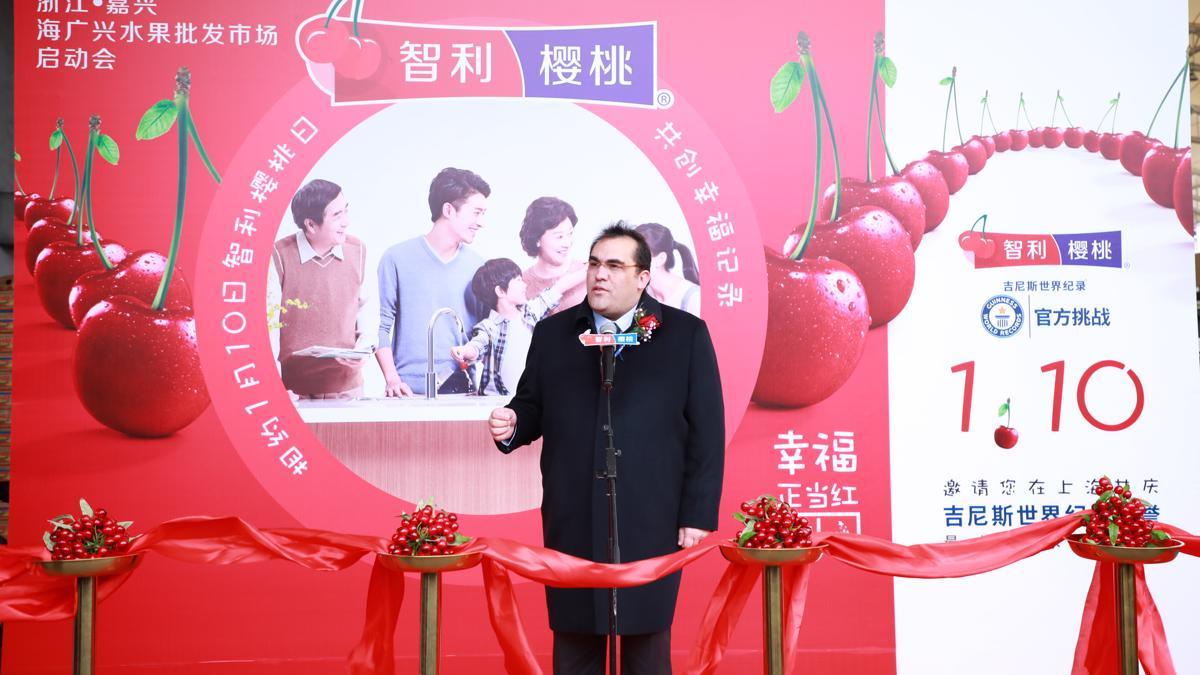 With sales of southern hemisphere cherries skyrocketing over recent years, and with Chile by far the largest supplier of these cherries to the China market, Produce Report invited Charif Christian Carvajal, Marketing Director, Europe and Asia, and Rachel Cao, Marketing Assistant, for the Chilean Fruit Exporters Association (ASOEX) to give an online interactive lecture on December 25 to an audience composed of professionals from many different parts of China’s fresh fruit industry—from importers through to retail purchasing managers.

The Chilean Cherry Committee of the Chilean Fruit Exporters Association (ASOEX) promotes Chilean cherries under the brand Cherries from Chile. The goal for this lecture, which was delivered via the WeChat messaging app, was for Carvajal and Cao to explain how Cherries from Chile will promote its products in China for this season, which runs from November through February.

“This year is a very important year for our industry,” said Carvajal. “We’ve taken a very big step forward: the Chilean Cherry Committee has set up an office in China with the objective of strengthening our presence in this very important market and promoting our fresh cherries.”

It should not come as a surprise that the Cherry Committee is taking China very seriously. Even as the industry has ramped up production and exports over the past few years, China has taken an ever larger share of Chile’s cherry export volume.

The 2018/19 season promotional campaign consists of several parts, with activities set to reach their height in mid-January, which is predicted to be the peak of Chilean cherry arrivals as consumer demand ramps up prior to the Spring Festival holiday in early February (fresh cherries have become a popular holiday gift for Chinese consumers).

According to Carvajal, the longest-running component of the 2018/19 promotion will be a social media campaign on WeChat and Weibo (including posting from KOLs), which will run from 12 December to 15 February. Cherries from Chile will also cooperate with social video app Douying and food delivery app Eleme to run promotions, as well as, “advertising on more than 16 different apps across the board to be able to communicate to each of the specific target groups of our campaign.”

As the Chilean cherry season heats up in January, Cherries from Chile will also run outdoor media advertisements: “Across 15 different regional cities in China we’ll be putting advertising inside lifts [elevators] from the 12th to 25th of January,” said Carvajal. “And also mega LEDs, again across 15 different cities, from the 8th to 21st of January. We always try to advertise on outdoor media in areas that are in close proximity to our retailer partners.” 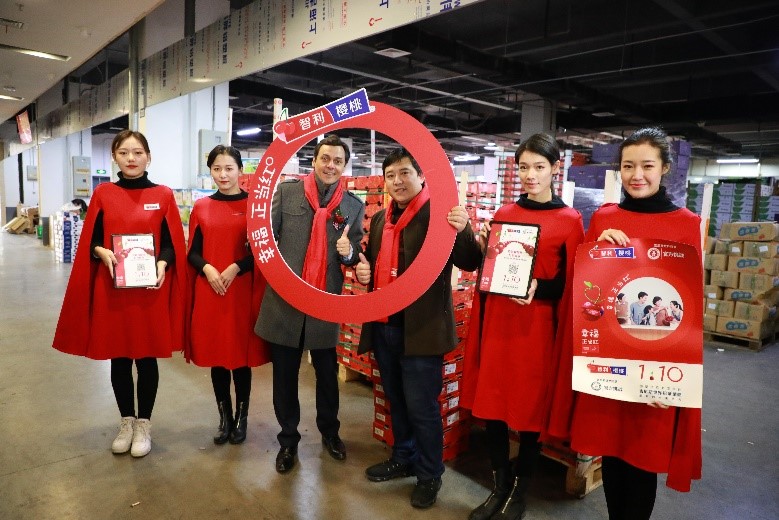 The social and advertising campaigns will be bolstered by trade media advertising and a series of wholesale market promotions aimed at increasing enthusiasm for Cherries from Chile among traders. “This season, we are focusing more on wholesale markets in regional cities, like, for example, Shenyang,” said Carvajal. This is part of what he describes as an overall shift in focus to not just pay attention to major international cities like Beijing, Shanghai and Shenzhen, but to also promote in a wider range of smaller cities, including more cities in interior and western China, where Chilean cherries are increasingly available to consumers through both offline and online channels.

On the consumer events side, “offline promotions as well as online promotions are key,” said Carvajal. “In terms of our POS promotions with major retailers, this season we’re going to be in more than 64 cities across China, undertaking promotions through 29 different retail channels, which includes 5 fruit specialty stores chains and 24 hypermarket and supermarket retail chains.”

And then there is the big event. “One of the highlights of this year’s campaign is our event on the 10th of January in Shanghai,” said Carvajal. “This is a very special event, which we will be promoting throughout the whole campaign period. Basically, we are setting out to use Chilean cherries to break the Guinness World Record for the longest line of fruit ever constructed.” Currently Cherries from Chile is using social media, events and advertising to push traders and consumers to sign up for a lucky draw with the chance, “to participate in this special Red Moment.” 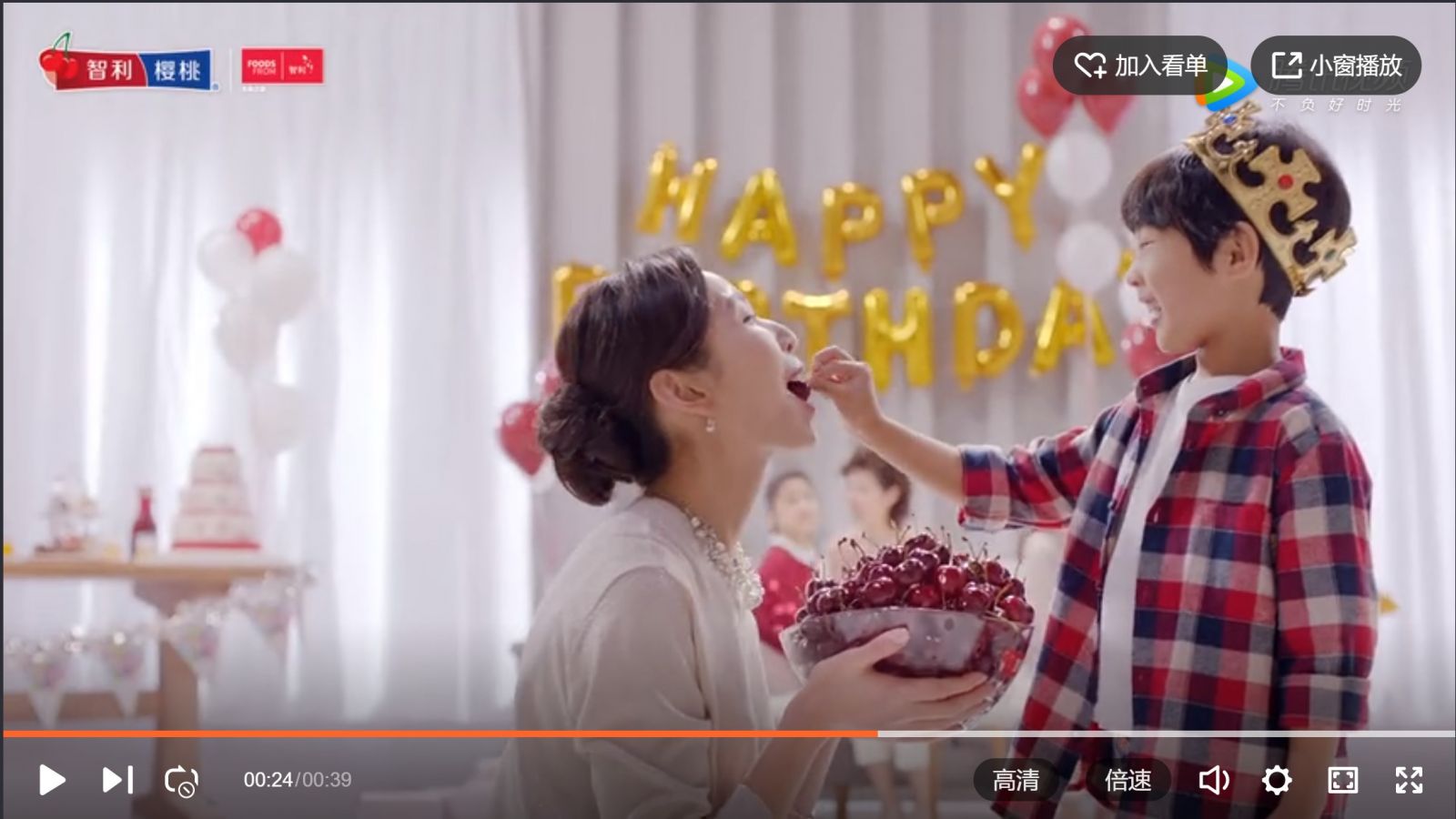 Cherries from Chile is promoting cherries in China under the tagline of “enjoy red moments,” which are positioned as special moments shared with other people and sweetened by the addition of Chilean cherries. The Chinese version (幸福正当红) of the tagline is quite a bit more rich and layered than the English—encompassing ideas of the warmth of the holiday season and the positive cultural associations of the color red. Key graphics and the brand video for this season show cherries being enjoyed by different groups of people in a variety of situations. 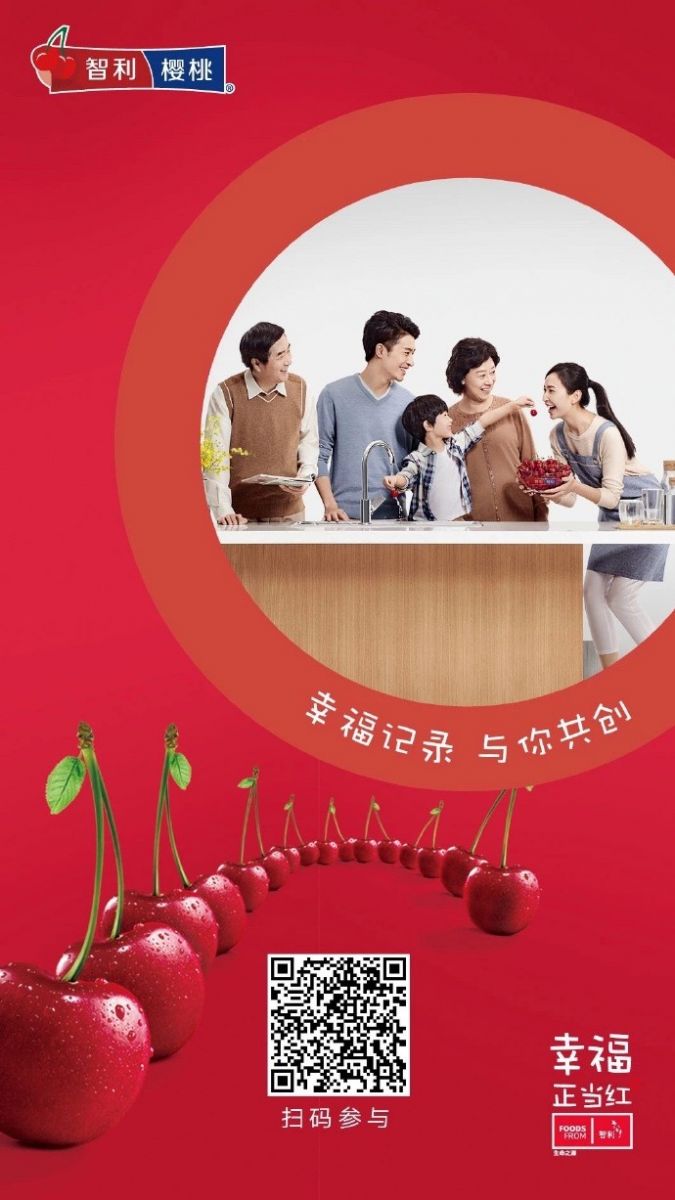